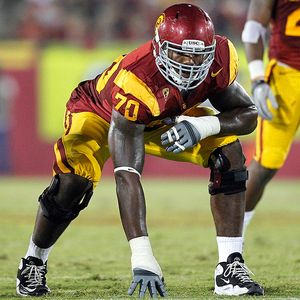 There are 42 college Pro Days set to take place in the next week and a half. Players from each college will workout for the various NFL coaches and scouts at particular college or university on the designated day.

There’s one particular Pro Day which I believe will have a great deal of affect upon the Eagles and their first round draft pick.

First of all, the history of Eagles draft under Andy Reid have shown us that the head coach leans towards addressing the offensive and defensive lines in the first round of the draft. The Birds need help on the right side of their offensive line and this 2011 draft class has quite a few first round quality offensive linemen.

Picking at number 23 means having to wait until more than nearly three-quarters of the team have made their picks. Some of those teams have needs on the offensive line, so they’ll get the first chance to make their picks before the Birds. That’s brings us to Tyron Smith, who is potentially the top offensive tackle in the draft.

Smith, who is regarded as the best athlete amongst this year’s offensive tackles weighed in at 308 at the combine which was up from his 290 pound weight at the end of the college season. He will weigh-in again, then do agility drills and he’ll run a 40-yard

If his knee checks out okay, and his workout is as impressive as expected with his tremendous quickness, speed and athleticism, he could become the number one offensive tackle in this draft, which will mean he’ll be the first tackle taken off the board in the first round of the draft.

His selection will push Wisconsin tackle Gabe Carimi and Florida center/guard Mike Pouncey down to the Eagles at the 23rd position. I believe the Birds would be happy with either of these picks, so Smith’s workout will have an affect upon which players are available for the Eagles when they make their first round selection at number 23.

Here are all the remaining college Pro Days of 2011:

Talented Oklahoma State Running Back To Visit The Eagles (Video)

please no more OT’s from USC

If Tryon Smith Knee checks out ok, I think he will be the 1st OT taken
and could go as high # 13 to Detroit Lions, #14 to the Rams
or #18 Chargers or by the Gaints at #19 by the latest and very unlikley that he would last until #23 for the Eagles..
Other players the Eagles may be interested in checking out from the USC Trojans ..

Center Kris O’Dowd at 6-4 305lbs is rated as the #3 Center and has the athleticism to play Guard at the NFL level by most observors.. He’s a 3 Year
starter at USC and could be the type of leader of the OL for the next 6-8-10 years.. If Eagles can get trade Kolb and get some extra picks, this may be a player to target in the 3rd Round

TE Jordan Cameron at 6-5 255lbs who had a excellent Senior Week as well as a good week at the Indy Combines by all observors has moved up the Draft boards and probably falls into the 3rd Round Pick.. Has good hands, is deceptively quick and a very good route runner and with a Draft Class lacking in overall depth at the TE position,may be one of the top TE’s chosen and a player the Eagles keep an eye on

CB Shareece Wright – at 5-11 185 lbs, Wright has the speed and coverage ability to play at the NFL level.. He needs to get stronger and work on his tackling as all young Secondary players do.. He could also be utilized as a
Kick-off/Punt Returner. I don’t see him as Starter material at CB his first 2 years, but could be a solid Nickel/Slot CB and a Special Teamers.. I look for him to go in the 4th Round..

I think it might be possible that he could go 9th to the Cowboys.