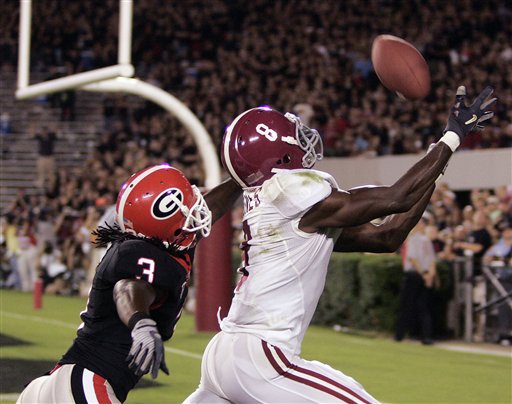 There’s a feeling around the league right now that Auburn quarterback Cam Newton is growing on the Panthers and he swept them away at his Pro Day, so there a good chance that he could be Carolina’s first pick in round one. Missouri quarterback Blaine Gabbert has also helped himself with an outstanding combine performance and impressive Pro Day, so it might be impossible for Buffalo to pass him up.

I think Alabama’s wide receiver Julio Jones has overtaken Georgia wide receiver A.J. Green as this draft’s number one receiver. Jones blew away the competition at the combine and he did it on a broken foot.

As for the Eagles and their first pick, this year’s crop of offensive lineman is deep, so the Eagles are sure to get a shot at one of them, but it might not be who they think it’s going to be. There are quite a few teams in front them who need offensive linemen as well, so they’ll have to select from the leftovers.

I could see them putting Castonzo at guard temporarily in order to give him time to adjust to the pro game.

Proposed NFL Rule Changes Would Have A Major Affect On Kickoffs

Not bad. I find it hard to believe though that Nick Fairley would fall that far.

Peter King wrote in his column that Ried has a team on the hook to trade a 1st rounder for Kolb, but is trying to work out a deal with a team that has a higher 1st rd pick

• Andy Reid apparently is serious about trading Kevin Kolb. At the NFL meetings Sunday, a good source told me Reid already has one team willing to offer a first-round pick for Kolb, and now he’s looking for a team with a higher choice in the round to make him a better deal.

Aren’t teams prohibited from trading right now without a CBA in place?

u guys got better sources then the actual media
lol source

During this current CBA you can only trade picks not players

Paulman heard the Deal in principle is with the Seahawks for the 1st Rd Selection #25 Overall and a 4th Round pick in 2012 Draft..
If the Courts on April 6th, uphold the Players Union right to decertify, then
I think there will be Trades, a Free-Agency periiod and player movement right after the Draft. If the Courts rule in favor of the Unions, then there will be no players movement,trades until some type of CBA or Agreement in place..
Right now I would say 65%-35%, the Courts rule in favor of the Players

Not to get our hopes up but we may have a chance at Patrick Peterson with the 9ers possibly selecting him at 7 as G sees it so far. That could be a team the eagles are targeting or it could be the bills, cardinals, vikings, titans. The possibilities are endless.

Side point, how do we know that the eagles didn’t put this report out themselves? This sounds like something they would do. And even if they didn’t peter king is rarely accurate with anything he says so I wouldn’t quote that guy

EaglesBirdGang, I was thinking the same thing. Don’t forget that at this time of year, there is more posturing than ever before. A bunch of smokescreens.

I dont think the Eagles take Liuget…. they are going to give Washburn a chance to wake up Bunkley and Patterson…. the greater need is a playmaker in the secondary or DE …. the new “9 wide” technique uses speed and the Eagles are lacking outside of Trent Cole at DE.

Patterson is not built to play this style of DT.. He is a hold the fort down and stand his ground kind of DT, Washburn demands that his DL get up the field and penetrate which is not been Patterson’s style of game since he’s been a pro. he’s too small,heavy and not explosive enough to play Washburn’s schemes.. I think Patterson gets traded to the Panthers for their 4th Round pick (which is #97 Overall) and he can re-unite with DC McDermott in Carolina
I do think the Bunkley,Dizon,LAws,Tapp and the young guys will all improve and love to play under Washburn,s attacking style..