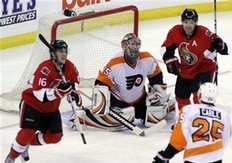 I labeled Sunday’s shootout loss to the New York Rangers as a “first step in the right direction.” Tonight’s debacle in Ottawa is about two steps back, if not a complete stumble. There were very few positives to take from the 5-2 loss to the Senators, who have been out of playoff contention for months, are stocked with rookies, and have lost arguably their three best players due to injuries.

The Flyers themselves have lost several players due to a wide variety of issues, including Danny Briere, Blair Betts, and Chris Pronger. The absence of Pronger and Betts (especially Betts) was obvious tonight when three of the five Senators goals were scored on the powerplay. Prospect Ben Holmstrom was recalled from the Adirondack Phantoms to replaced Betts on the penalty kill, but was in a bit over his head. I remarked in his NHL debut that he didn’t look ready for the big leagues yet and I would stick to that statement.

From a goaltending perspective, Craig Anderson was strong in net for the bleak white north and held the young Senators in the game. Anderson was sent to Ottawa from the Colorado Avalanche right before the trade deadline and has played very well in his new home, owning a 9-5-1 record with two shutouts and a 0.940 SPT.

Bobrovsky, on the other hand, once again looked terrible when it came to long shots through traffic. To his credit, he was very good at saving his teammates’ butts when they lost coverage and allowed for one-on-one opportunities, but the long distance shots are a serious problem. It almost looked like he was ducking the puck on Ryan Shannon’s shot that tied the game in the second period.

The two powerplay goals look like a positive on paper, but not when you consider that the Flyers had six powerplay opportunities and looked abysmal for the majority of them.

I was critical of the decision to move Mike Richards to the wing before the puck was dropped, as there are only two games left in the regular season and it seems like a poor time to begin experimenting with line changes. Richards, though, had only scored twice in the last eighteen games and both of his powerplay goals came as a result of good work ethic from his linemates Claude Giroux and Nikolai Zherdev.

It’s hard to judge whether that line should stay intact on Friday, but it would certainly make sense to keep them together as a powerplay unit. Richards played well in front of the net, and keeping defensemen on the point rather than the captain may prove fruitful come playoff time.

The Flyers had the opportunity to clinch the Atlantic Division tonight, which would have guaranteed them a spot in the top three seeds. Instead, both the Washington Capitals and Pittsburgh Penguins won tonight, moving them to 2nd place and 1 point ahead of the Penguins.

There is no more time left to “right the ship.” If the Flyers are to maintain home ice advantage and hope for a long playoff run, they are going to have to dig deep and find whatever drives them to success again. A fourth round seed would place them in a first round matchup with the Tampa Bay Lightning, which is about the worst conceivable match-up for the postseason.

It’s Early, But Victorino Is Struggling In The Lead Off Spot

Anyone else sense a 1 and Done Playoff Season for the Flyers this year..
Weather is starting to get nice and these canadien boys love their golf..
Flyers cal up Goalie Leighton, which I would say shows a lack of confidence in
in both “Bobby/Boucher” as playoff goalies doesn’t it..

agreed paulman…these Flyers just don’t seem hungry anymore. I thought they righted the ship a couple weeks ago with some great “energy” games against pittsburgh and washington (even though they lost those). They played up-tempo, had good fore-checking, and their defense actually looked like they gave a damn. These playoffs could be brutal…all of those “bottom” teams are hungry and work their butts off.

I am thinking the Flyers will go back to their normal 10 year play of dissapointing Playoffs performance where they appear to go thru the motions and get bounced out by an inferior team..Hopefully Coach Laviolette will keep the boys in Orange pumped up and playing hard, but these Canadien Boys have a mind of their own sometimes.. The strong desires for Beer, AC Gambling,Babes & Golf seem to creep in, once the weather gets nice…

paulman, atleast these “Canadian Boys” don’t get involved in the gun play, stealing booze from casinos, doing steroids, and any other type of arrest every other day like football, basketball, and baseball.

got to admit the flyers are treading shallow waters and better get it together or they will leave us all disapointed once again.

The Flyers are in a tough position, too. Because they have been in 1st place for practically 2/3 of the season, nothing less than a trip to (and winning) the stanley cup will be acceptable. If they had an up and down season, finished about 4th or 5th, I believe we the fans would be a little more content if they made it to the 2nd or 3rd round.

Paulman, I hear what you’re saying about “Canadian Boys” loving their beer, golf, babes, and AC, but you can’t tell me that trumps winning the Holy Grail for ALL Canadians…the Stanley Cup.