It’s Early, But Victorino Is Struggling In The Lead Off Spot 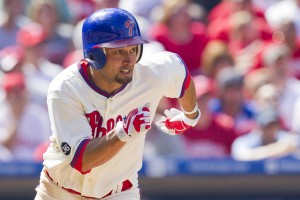 On a night when most of the attention focused on the struggles of Cole Hamels, another Phillie’s player continued to come up short.

Shane Victorino labored through another night in his role as lead off hitter, going 0-5 in the Phillies 7-1 loss. The no hit performance dropped his batting average down to .154 through 4 games. His on-base-percentage is tied for the lowest on the team,

standing at only .214. Every other player on the team, except for pitchers, has an on base percentage of .313. All but 3 players on the team have an OBP above .380.

Not only is Victorino not getting on base, he is not taking the amount of pitches a lead off hitter should. In the 4 games Victorino has appeared in, he has 13 at bats. In those at bats, he has seen 40 pitches. That averages out to only 3 pitches per at bat.

The most pitches the Phils leadoff hitter has seen in a game was last night when he saw 17 pitches- in 5 at bats. His lack of discipline at the plate has resulted in him drawing only 1 walk so far this season.

While the absence of a true lead off hitter is not new for the Phils, Victorino’s struggles are coming at a time where their former lead off hitter- Jimmy Rollins- is lighting it up at the plate.

Rollins has answered his critics so far this season, as his approach to the plate is what the Phillies always wished it would be.

While Victorino has not seen many pitches, Rollins has done a good job this season waiting for his pitch. In four games, Rollins has

seen 76 pitches, over double what Victorino has seen. He has done this despite only having 2 more at bats. His 76 pitches in 15 at bats gives him an average of five pitches per at bat, two more than Victorino.

While that may not seem like much, it is the lead off hitters job to get long at bats- and Rollins’ at bats are lasting almost twice as long. Rollins has seen over 14 pitches in every game this season, and saw 27 in the Phillies win over the Astros on Sunday.

Victorino’s problems raises a serious question for the Phillies- and that is what to do if his shortcomings continue. Should they move Rollins out of the three hole and back into the lead off spot? Rollins has flourished in his role so far, and the Phillies risk him cooling off if he goes back to the top of the order.

The question gets even harder when Chase Utley gets back. Utley is still taking baby steps in his recovery process, but those steps could turn into a jog soon according to Ruben Amaro Jr., who updated the media on the situation yesterday.

Utley has always batted 3rd, and could return to that spot when he finally gets back. If he is batting 3rd, it only makes sense for Rollins to take his spot back at the top of the lineup if Victorino is still struggling.

The season is young, but Victorino’s approach at the plate early on has to have Phillies management, and the fans, concerned.

With No Title: Should Reid Be Ranked 3rd Best Coach In The NFL?

If Victorino continues to struggle,
Phils may have to move Polanco to lead-off, Rollins to 2nd and Utley To 3rd
But Utley will most likely bat lower in the line-up for a while before he gets his timing down whenever he does return..

See, that is the thing….. Rollins is doing so well because he is in the 3 hole. You have to keep him there. You can’t move him back to leadoff. He won’t do well. He is not a leadoff hitter. Honestly, the 3 hole might be his best spot. Put Utley 2nd when he comes back, if he comes back. That breaks up the Left, Left, Left (If Ibanez is batting 5th), when Utley comes back.