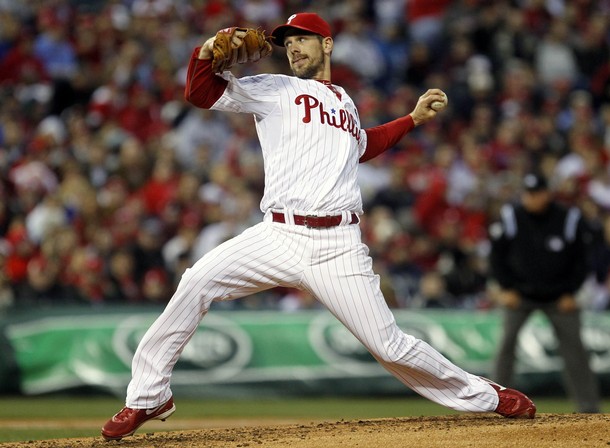 The Phillies are off to the start that all fans hoped for all winter- if not better.

The team has won 5 of its first 6 games, winning by dominant pitching at times, and an explosive offense when the pitching has not come through. The sell out streak continues to grow, and the mood down at Citizens Bank Park could not be better, but things could

change quickly if the Phillies don’t go down to Atlanta and handle business against the Braves.

Make no mistake about it, the next three games are big games for the Phillies and the Braves. The Phils need to go down to Atlanta and show the Braves they are still the top dog in the NL East.

The Phillies have faced two teams so far- in the Astros and Mets- that are not expected to compete for the anything this season. The Braves, on the other hand, will be the team’s first big test.

The Braves have not gotten off to the start that most experts thought. The Braves have lost 4 of their first 7 games, and a big reason for their struggles is the lineup everyone had thought would be explosive. The Braves have scored 24 runs in their 7 games, but 11 of those runs came in an 11-2 win over the Nationals. In the other 6 games, the Braves have averaged only 2 runs a game. Their offense

has scored 2 runs or more only twice, and they’ve been shut out once. Atlanta is 23rd in the league in batting average, hitting only .226 as a team.

The only reason they have won the games they have, has been because of a pitching staff that is 3rd in the majors with an ERA of only 2.75. They have surrendered only 3 home runs, which is tied for second best. One area the Braves pitchers have struggled with is with their control, as they have walked 24, which is second highest in the league. The staff is 13th in the majors in strikeouts, with 45.

Atlanta is a young team that is not off to the start it was expected to be. Young teams can get wrapped up in reading about themselves, and the Braves are playing like a team that bought the hype.

The Phillies have a chance to go down to Atlanta and send a message. If Philadelphia can win 2 of 3, or sweep the series, it will give them a lead in the division as much as 5 games and a mental edge that could mean even more.

Cliff Lee will take the mound first, and he has a career ERA of over 5 against the Braves. Roy Oswalt has an ERA over 6, and has never beaten the Braves. Cole Hamels is the one of the 3 that has a winning record against Atlanta, but his ERA is still over 3. Take into consideration his last start, and Hamels will be under a ton of pressure to turn in a strong performance and close the series out against the division rivals.

Yes, it is early in the season, but ask Boston Red Sox fans how little the first 6 games can mean in determining the tone of a season.

Andy Reid Must Give Michael Vick More Control Of The Offense

I think we should change our name from the Philadelphia Phillies to the Philadelphia Sweepers cause thats exactly what were gonna do to teams all year! Braves are DONE. Bring on the Nats in the next series! GO PHILS

Like that enthusiasm.
Also like that even though the Braves missed Doc, they get Lee, Oswalt and Hamels. Oh and a red hot Phils offense.

Should be a good Series,
Braves are down 2 of their Starters (Jurrgens and Medlen) so it’s a good opportunity for the Phils to jump on them early in games.. The Braves have no Left-Handed Starting Pitching which could be their downfall this Season, but they do have a couple of tough Left-handed Relief pitchers in their Bullpen in O Flaherty,Sherrill & Venters
If Phils win 2-3 at their place, it would send a strong message, Braves have not scored much or gotten many big hits (Homers/Doubles) from their big hitters yet.. If Phils can jump on them early, they should be in good shapre.

Braves send a heckuva pitcher to the mound in Hudson tonight. Too bad Lee is better and there bats are sleeping. Look for Cliff to continue his dominance with a 8 inning performance tonight. 60degrees and that means the Phills bats come out smoking.Bartendar…two jacks for my friends Rhino and Ben.

If Phils batters can lay-off Hudson’s outside slider, then sit on his marginal fastball,they will hit him hard..