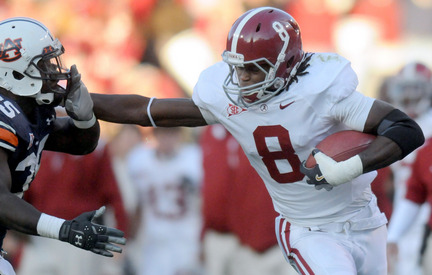 The consensus is at this present time that Cam Newton will be the first pick in the draft. His upside is so out of this world that the Panthers can’t draft somebody else and be left wondering, what if.Alabama’s Marcell Dareus is expected to go second to the Denver Broncos.

The Bills need a franchise quarterback, so they’re expected to grab Blaine Gabbert. The guy has athletic ability close to that of Newton which says a lot.Julio Jones has taken the place of A.J. Green as the best receiver in the draft. We knew he was bigger and stronger, but he’s shown himself to be much faster. He gets the “Beast Award” for looking a like a man amongst boys.

Von Miller is considered a sure thing because of his ability, attitude, consistency during college career and work ethic. UNC’s Robert Quinn was falling after the NFL Combine, but he regained his momentum after his outstanding Pro Day performance.

Patrick Peterson may wind up being the steal of this draft. Many of the scouts say that Peterson is the safest pick in this draft.
Nick Fairley has an amazing upside, but the fact that he only performed at this level for one full season. Oh boy but did you see how well he played in the one season.

Tyron Smith convinced the Cowboys at his Pro Day that he was the man they wanted. The Skins would love to draft a quarterback, but

after Newton and Gabbert there’s not a quarterback in this draft, who rates high enough to select at the 10 spot.

As for the Eagles, I have them grabbing Wisconsin’s Gabe Carimi with this pick. He’s got the skills to play either guard or tackle. He’s big, physical and could step in right away as a starter. I see them using him at guard in his first season. He can always move outside if needed.