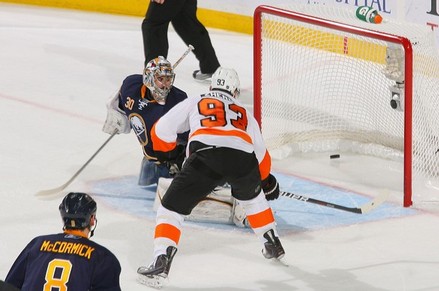 The Flyers’ 4-2 victory over the Buffalo Sabres in Game Three was another nailbiter, but they managed to hold onto the win to take the series lead for the first time. Despite a potential goalie controversy, Brian Boucher took the reins of the club and stopped 35 of 37 shots.

Jeff Carter put the Flyers on the board early with a laser of a powerplay goal, but Drew Stafford returned the favor shortly thereafter. The Flyers had dominated from the outset for about six minutes before becoming complacent. For the remainder of the first period, the Buffalo Sabres out-hustled, out-chanced, and ultimately out-shot the Flyers 15-6.

Danny Briere recaptured the lead in the second period after a bang-bang play was set up by Scott Hartnell. Hartnell would have had a decent game if it wasn’t for his poor decision-making when it came to penalties. Nikolay Zherdev, replacing an injured Andreas Nodl in the line-up, put the Flyers up 3-1 with help from linemates Mike Richards and Kris Versteeg.

Should Nodl be ready for Game Four, I would expect Dan Carcillo to sit. He has been playing very well thus far, scoring the second goal of Game Two and providing a lot of energy while not taking many penalties. Unfortunately, he is not utilized on either the penalty kill or the powerplay units, and as a result, was the only player on the team to receive less ice time than Zherdev (6:02 compared to 8:14). Nodl can at least eat up time on the penalty kill.

Nathan Gerbe, all of 5 ft-5in, cut the deficit to one goal with a high glove-side goal that Boucher would have liked back, based on his reaction.

The Flyers played defensive hockey for the third period, out-shot 11-5 in the frame. Kimmo Timonen managed to grab the empty net goal to put the Sabres to bed.

Heading to Game Four, the Flyers still need to work on their special teams as well as their discipline. In their defense, the referees have been calling the games very questionably, but that’s not much of an excuse. Hartnell in particular needs to re-focus and control himself the way that Carcillo has.

Game Four begins on Wednesday. For the latest Flyers news and in-game updates, you can follow me on twitter (@JoshJanet).

They need to teach Carcillo how to play some pk. I’d much rather have he and Zherdev in instead of Nodl.

Good solid game all around by the Flyers who should go on and win the Series
One area to work on is winning face-offs, they must have lost 70% of them last evening and especially in their own zone when short-handed, a more taleneted team will take advantage of these opportunities..

Paulman I agree, other teams will take advantage of that. The flyers also need to maintain leads. They score fast and furious but then allow teams to come back. Pronger is huge for them, he needs to be healthy. The flyers just need to maintain there discipline and play like I know they can and stop allowing teams to hang around

They will put away the Sabres and hopefully can a couple of days off in between starting the next series so Pronger can ready to go.. I think he is about a week away, he skated and did some passing drills yesterday it was reported
If they can hold on and beat the Sabres without him they should give them a big boost for the remainder of the Playoffs.. They will need him to beat the top Offenses they will face down the road.. Buffalo is a scrappy team but not a whole of lot offensive talent on their roster..

I love this team. They are still tough and hit hard and are not afraid…like most teams play in todays nhl.

Paul, less than a week ago you predicted flyers will lose in six, seriously, are you locked up in an insane asylum and your only outlet is gcobb, where you just rant against the home teams, are wrong, the root for them. Seriously man, give it up

Pretty tough on Hartnell there… first penalty, he was coming back to break up a 2-1 after a defender made a terrible pinch, and he took a penalty breaking it up. Perfectly understandable for a forward trying to get back to take a penalty in that situation; it was just bad luck that the two of them ran into the net as well and made it a double.

The second penalty was a crap call; he was being hammered into the ice, gets up without retaliating, and gets called for “roughing”. I guess his back was being too rough to Mike Weber’s stick.

Easy Jake,
Things change and circumstances change. They Flyers are a much better team and are finally playing like it and will Win the Series, but they will have to execute better on Special Teams/Faceoffs to beat their next Opponents.

Great win by the Flyers against a very determined Buffalo team on their home ice. It showed a lot about their character to withstand 37 shots and only allow 2, kill off some timely penalties, and grab the series lead.

My sources say that Pronger has been delayed getting back due to a second break that happened in his hand. They’re definitely going to rest him until next series and hope he can play game 1…….but the Flyers still have to get past buffalo first.