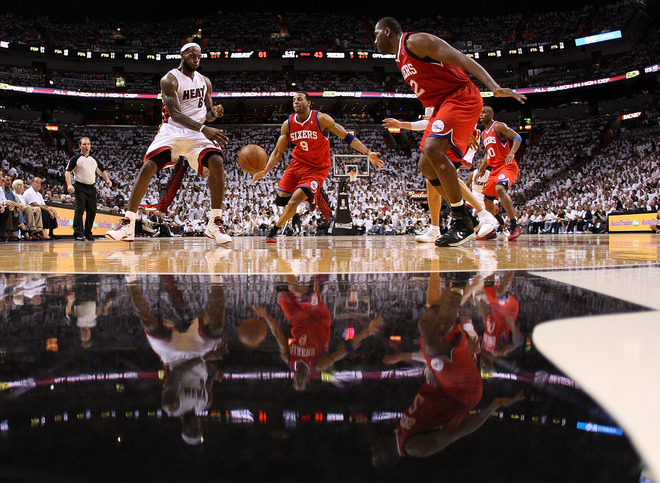 Do you remember that tremendous start the Sixers had in the first game of the series versus the Miami Heat? That seems like a very long time ago with Philly now in a 2-0 hole after a 94-73 loss to the Heat.

As you can see by the final score, it didn’t get a lot better in the second half as they tallied 42 with the Heat just going to through the motions as they let the time run out with their scrubs on the floor.

You can see that the Sixers don’t have quality outside shooting to win anything going forward. The core of this team must become better shooter from outside and they’ve got to acquire a number of good shooters in order to overcome this problem.

They shot only 34.2 percent for the game and you have to give credit to the Heat’s defense for playing a tremendous game. They contested all of the Sixers’ shots in the paint. They blocked shots and intimidated the Sixers, while daring them to make their outside shots.

Doug Collins hit it on the head after the game. “If we don’t run, it is going to be very difficult for us to score against this team,” he said. “That is the makeup of our team.”

Guess what, they’re going to be playing some zone on Thursday against them.

Memo From Eagles Fans: Get A Deal Done Now!!!

We got absolutely nothing from Brand, Hawes, Iggy, Speights and Meeks.
This team SUCKS..and I’m an avid Sixers (Philly) fan, the only thing to like about this team is Doug Collins, Jrue and sometimes Evan Turner. Where was the tenacity on defense. Looks like they checked out already…so disappointing. I hope Doug continues to improve and trades and drafts will bring us some better players. Am I the only one who misses Allen Iverson. I know he was an a-hole but damn!!!!

Where’s Kyle Korver when you need him… Good Grief…
When the Sixers play and shoot like they did last evening, It’s difficult to see them as a legitimate Playoff team. They are young and will get better, but they have lots of players who have to work and improve on their outside shooting

I said weeks ago that this was the team we don’t match up with the most. I said any team other then the heat in the 1st round. Yes the sixers were exposed but did we expect anything less? The sixers don’t have a good halfcourt game all they wanna do is run but in the playoffs

Teams tighten up on defense and you must execute in half court sets. Shooting is another reason. The sixers are just overmatched.

To EBG,
You are correct in that the toughest match-up in the East for the Sixers is the
Heat, hopefully they can play well and hard and at least go down battling and fighting.. The Sixers have a bright future and need a couple of more players

Which is why making the playoffs for this team was fools gold..should’ve just gave away games this year to improve draft slot…The East is Top heavy….Chi, Bos , Orl and Mia are the only teams that are truly competeing for the East …..
The NBA is a star driven league w/o one and well you are the our beloved sixers..I’m curious to see the turnout for these games down in SP

Paulman… yea it would be great to see them win at least one game and try and build off of it, they’re overmatched tho. I said they would lose this series against the heat but would at least go down fighting. They do need more players but shouldn’t trade iggy, lou,thad,jrue unless the deal was right… but speights and brand are expendable. They need more scoring and good defense at the pf and c positions.

Gotta luv it… good points. It is a superstar driven league and teams won’t win without one, they’ll remain .500 until they get one. What’s great is that the sixers are young as heck