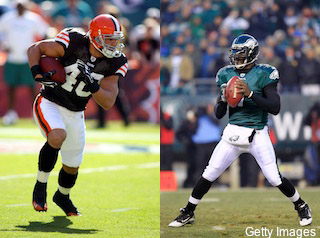 It was supposed to Michael Vick versus Green Bay Packers Super Bowl MVP Aaron Rodgers in the finals of the battle for being on the next cover of EA Sports Madden video football game. On the way to the finals something unexpected happened, Rodgers was upset by Cleveland Browns power running back Peyton Hillis.

Vick was a 3rd seed, but has had no problem getting more votes than his competition, so far. He has beaten Cowboys pass rushing linebacker DeMarcus Ware, Houston Texans perennial-All-Pro wide receiver Andre Johnson, San Francisco 49ers Pro Bowl middle linebacker Patrick Willis and Minnesota’s All-Pro running back Adrian Peterson. Each win has been by a large margin, which is the reason he goes into the final as a favorite.

Hollis who was a 14th seed in at the beginning of the competition and he’s been able to come out with enough votes to advance. He not only upset Rodgers, but he took down Atlanta’s franchise quarterback Matt Ryan as well.

Some of the Packers fans say they didn’t want Rodgers to win the award because of the much talked about Madden curse, which refers to the numerous players who have gotten injured in the same year their picture has been on the front of the Madden game.

Vick was on the cover previously and happened to break his leg and miss 12 games during that season.

Eagles 2011 Schedule Will Be Revealed Tonight

I’ve never heard of ‘Peyton Hollis’. I think there is a RB on the Browns named Petyon Hillis, though.

I might get hated for this but Peyton Hillis deserves this cover not Vick. there should never be a repeat of the Madden cover. Hillis is going to be taken 1st over all in EVERY fantasy draft not Vick.

LMFAO! @vricchni — if you really believe that, let me join your league. Vick is going to go number one overall in 99 percent of the leagues.

Vricchini what??? Peyton hillis going first? I have nothing more to say

Hillis 1st overall?? If anything, he has fantasy bust written ALL OVER HIM

I came in 2nd place on GCobb’s Fantasy league last year..
We had 10 teams thru the ESPN Rules and was a lot of fun..

Paulman, is there a spot for me if you guys move to 12 teams?

No need to expand to 12 Teams BTC24,
You can take Vriccihini place, since he came in last place and is now ineligible to play for 2 years,, ..

Only kidding of course…
“Scorpion” put the Fantasy Leauge together last year and did a great job of keeping everyone informed.. I am sure everyone would like to have some more players/teams involved..Check with Scorp..

lmao @ paulman — with Vricchini stating that Hillis will go number one overall in most leages, that tells me all I need to know about his fantasy football skill. Him coming in last place is definitely not surprising.

To vrichinni Even if you dont think Vick deserves the cover- Think about this- Isnt there a RB more deserving of the cover? Peyton Hillis had a good season , not great. Who’s that other guy? The one who also came out of nowhere, off the bench, and rushed for more yards and TDs, in less time than Peyton Holla @ Me When You’re in the Same Elite Class of Players as Vick- Oh thats right his name was Arian Foster.

What would u rather see:

Madden 12: The Year of Mobility- Redemption…the play’s not over till the whistle blows…

Madden 12: The year of Blue Collar Hype and Pretty Good Football- and Hey I didnt know Josh Cribbs was white!

I had vick on my fantasy team from week one last year (started as backup to Phillip Rivers), and he scored at least 25 pts in every game he played win or loss. The only game Vick didn’t putup fantasy points was when he cracked the rib vs redskins and left early. Hillis ran out of gas before the season ended- Vick will be number 1 overall in most leagues, and I would think #2 would be Foster or AP- I’d take Hillis, don’t get me wrong- But over Vick? Why are you an Eagles fan vrichhini? I mean if I believed so deeply in Hillis, I’d be confident the Browns were going to win it all.

Guys how many games do you think Vick is going to play this year? News flash He aint playing all 16 games. You draft your injury prone QB all you want. Once Gary opens his league again we’ll see who has the last laugh!!!!!

@ Eaglesinoak Just cause im a Eagles fan does not mean im going to draft a player just cause he is a eagle.

@ Paulman and Bird poop it was my first year playing FF. I had the last pick and 3 of my starters were injured for the year. At least I still played every week even tho I stunk I still didnt quit like a few ppl

@btc. Scorp held a league last year and Gary did too. Im sure he will do it again. Its a lot of fun.

@ eaglesinoak you make a good point I like Foster. In fact with him and Hillis I think Chris Johnson is probably your 3rd best RB on the board.

Vricchini — if you had ANY sense on how to play fantasy football, you would know that it doesn’t matter if Vick plays all 16 games. He only played 12 games last year and led the entire fantasy league in points. 12 GAMES!

Please, if you don’t know what you’re talking about when it comes to a subject, don’t comment on it. Peyton Hillis…..lmfao.

Birdobeamen- if you had any sense you would know that in Vicks last 4 games since he played the NY Giants his stats went down significantly. That formula the G-men used played apart in his game. I look for more teams to utilize that and because Andy Reid is our coach I have no confidence in him adjusting to what has made vick exposed.

yankees the browns aint winning nothing all though I think theyre on the right track to build around Hillis. Those who hate on him obviously know nothing about his game. Compare the numbers.