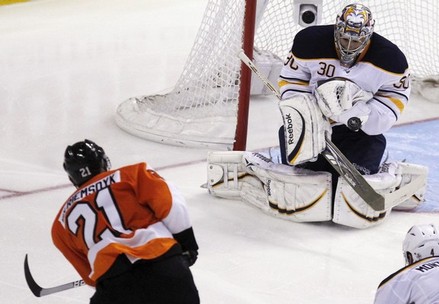 With the series tied at 2-2, the Stanley Cup Quarterfinal series between the Philadelphia Flyers and the Buffalo Sabres has become a best of three. Taking back the lead was critical for the Flyers, but a complete breakdown by the defense and goaltending crushed that hope before anyone could break a sweat.

The Flyers’ goaltending was considered the biggest question mark heading into the playoffs, but they had performed just fine in three of the first four games. Last night, however, Brian Boucher put forth an abysmal performance. This was arguably one of the worst games of his career. Two quick goals between Tyler Ennis and Thomas Vanek at odd angles put the Flyers on their heels and it was downhill for the remainder of the period.

“The first period… I don’t think we played even close to what we should be playing,” said Claude Giroux.

The referees once again inserted themselves into the game by calling goaltender interference on Mike Richards after he took a swing at the puck a split-second after Ryan Miller covered it. Richards was subsequently mauled by Chris Butler and the two headed to the box. A second goaltender interference call on Danny Briere put the Flyers down another man, and Marc-Andre Gragnani scored in the ensuing powerplay.

With no moves left to change the momentum, Peter Laviolette pulled Boucher and sent out Michael Leighton in relief. I don’t have any statistics in front of me, but I have never heard of a team rotating three goaltenders within the first round of the playoffs.

It was reported that Ben Holmstrom would replaced Andreas Nodl in the line-up to fill the penalty kill role, but black ace Zac Rinaldo was inserted into the line-up instead. For those unfamiliar with Rinaldo, he is basically a liability in the vain of Jesse Boulerice or Steve Downie. The only reason he was in the line-up was to “send a message” to the Sabres in the event that the Flyers were blown out. With 1:56 of ice time, I would rather have a level-headed Jody Shelley on the ice than this joker.

Despite the poor first period, Leighton was able to calm the team down in much the same way that Boucher was in relief of Sergei Bobrovsky in Game Two. Leighton kept the team in it as the Flyers began their comeback in the second period.

“Lavi came in after the first period and said ‘all we need is one,’ “ said Leighton. “ ’We win the second period, we’re going to win this hockey game.’ “

The comeback began with the makeshift line of Claude Giroux, James Van Riemsdyk and Nikolay Zherdev. Giroux cycled the puck back to Zherdev from the boards while JVR moved to the crease. Zherdev took the slapshot and JVR, carrying the team on his back, backhanded the rebound past Miller.

The goal had the same spirit as the first tally for the Flyers in Game Seven of the 2010 playoff series with the Boston Bruins. Down 3-0 with Leighton in net, the Flyers took the first step towards making history thanks to JVR.

Andrej Meszaros cut the deficit to one with a slapshot through traffic.

Danny Briere finally tied it at 3:36 of the third period. Mike Richards sent the puck deep while Kris Versteeg went to retrieve it. Falling down and on his butt, Versteeg fed it to Richards, who skated in to support him. Richards passed it through the crease to an unattended Briere who swept it in from the side of the net.

Heading into overtime, it was anyone’s guess how the game would be played out. The Flyers had the momentum, but an ill-thought turnover in the defensive zone led to Ennis scooping a Leighton rebound into the net.

Briere was optimistic after the loss. “It’s a tough loss, but the worst we can do is hang our heads… we were in a worse position last year, but [this is] a group of guys that can do it. I believe in this group here.”

The Flyers have all of Saturday to collect their thoughts from the loss. They had to win in Buffalo no matter what, so nothing changes there. Nobody, Laviolette included, knows who will be in net but my money is on Boucher with a very short leash.