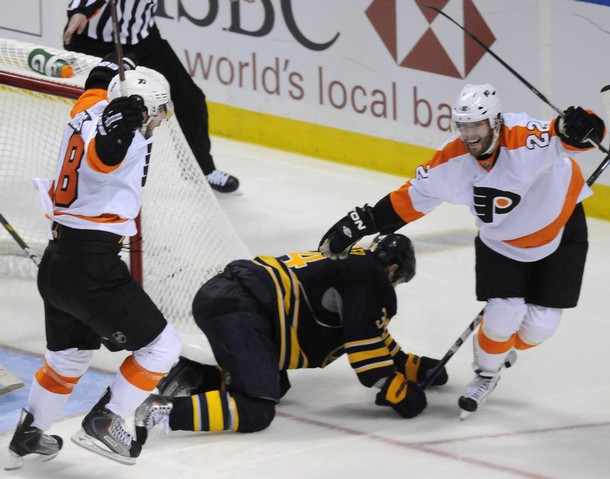 The decision to start goaltender Michael Leighton in Game Six of the Stanley Cup quarterfinals nearly became one that Flyers coach Peter Laviolette would have to explain for a long time to come.

With three soft goals in the first period on just eight shots, two of which dribbled into the net, Leighton nearly ended the Flyers season on Easter Sunday. Brian Boucher, stopping 24 of 25 shots, made the difference as the Flyers forced Game Seven with a 5-4 overtime win against the Buffalo Sabres.

Laviolette immediately named Boucher the starter of Game Seven rather than play spin the bottle with “Moe, Larry and Curly” as the Buffalo media have eloquently chosen to call the Flyers’ goaltenders. It’s the call that should have been made sooner, but a win is a win no matter how tense it is.

Playoff machine Danny Briere contributed two goals along with linemates Scott Hartnell and Ville Leino. Hartnell tied it late in the game to keep the dream alive, not unlike how he forced overtime in Game Six of the 2010 Stanley Cup Finals. Leino tallied the game winner. It’s a good sign that their confidence is growing in the postseason.

James Van Riemsdyk also continued his monster effort in this series, scoring seconds after a faceoff win. It’s a shame the Flyers have had to come back from behind for the second time in a row, but JVR has been as reliable as they get.

Rather than waste a roster spot on Zac Rinaldo again, Chris Pronger was in the line-up to help out with the powerplay. I’ve said it before and I’ll say it again- reading between the lines, Pronger will not be back to 100% before June. His 4:33 of ice time didn’t help the team much and an ill-timed cross-checking penalty eventually led to a powerplay goal for the Sabres.

Tim Connolly suffered a shoulder injury during the game after Mike Richards checked him into the boards behind the net. It was a routine play that only ended badly because Connolly chose to keep his head down and not protect himself, but that didn’t stop Sabres coach Lindy Ruff from whining about it after the game.

If Raffi Torres can get away with elbowing Brent Seabrook in the head, I don’t see Richards being suspended. The NHL went out of its way to explain to the players that behind the net, they are supposed to be prepared for a body check. Then again, the NHL tends to be fickle when interpreting the rules.

Derek Roy is expected to be back in the line-up for the Sabres in Game Seven. Roy’s presence could put the Sabres over the top if the Flyers don’t tighten up their defense and goaltending.

Game Seven is set for Tuesday at the Wells Fargo Center. For the latest Flyers news and in-game updates, you can follow me on twitter (@JoshJanet).

Contreras to the DL, Madson to take over closer duties