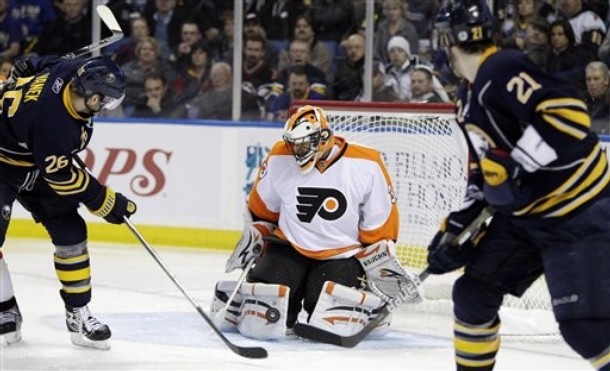 What was Peter Laviolette thinking? Down 3-2 in the series with the Boston Bruins, Laviolette found himself faced with another decision to make about who his starting goalie would be after Brian Boucher struggled in Game 5.

Laviolette’s choice was between Boucher and Michael Leighton. On the surface, it wouldn’t seem like a tough choice to make. Yes, Boucher let up two horrendous goals in Game 5, but he had just come off of three straight solid performances in Games 2,3, and 4.

Laviolette chose to ignore those facts, and instead opted to start Leighton, who had only seen action in two games at the NHL level all season. Leighton’s start was a disaster. He allowed three soft goals in the first period, and Laviolette had no choice but to turn things back over to Boucher.

What could Laviolette have possibly seen in Leighton’s effort in Game 5 to think that he was worthy of starting over Boucher in Game 6? Leighton wasn’t tested heavily at any point in Game 5; the Flyers carried play for the majority of the game after Boucher was pulled. Laviolette must have liked something he saw in overtime when Leighton let up a big rebound that led to the game-winning goal. There was no logic in the switch from Boucher to Leighton.

It’s one thing for Laviolette to have Leighton on the bench as the primary backup over Sergei Bobrovsky. If something were to happen

to Boucher, Leighton’s experience in the playoffs last season might make him a more viable option than Bobrovsky at this point. But to start Leighton over Boucher was just absurd.

Laviolette has been great during his time in Philadelphia. More often than not, he has known how to make the right choice on tough decisions, but he made an uncharacteristically terrible decision to start Leighton in Game 6. It almost cost the Flyers their season.

Boucher has been one of the biggest reasons that the Flyers have won three games in the series. He came out with a bad effort in Game 5, but Boucher had more than earned the right to redeem himself as a starter in Game 6. Boucher has been a good soldier, and a loyal teammate all season, and Laviolette should have reciprocated that loyalty going into Game 6.

Luckily for Laviolette, Boucher didn’t hang his head after his coach gave him a vote of no confidence. He kept himself mentally prepared, and turned in another solid performance when called upon. Boucher made 24 saves, only allowing one goal in relief of Leighton.

2011 NFL Draft: Looking Closer At Prospects Worked Out By The Eagles

Laviolette was playing a hunch. He’s worked pretty well for us so far.

It’s amazing every Spring and Playoff time, whoever is Coaching the Flyers, has to play hunches to decide on a #1 Goalie… It’s ridiculous and embarrassing..
If the Eagles did this every season and waited to decide on hunches who the #1 QB should be, Coach AR would be hearing it from everywhere…

Laviollette, just terrible goaltending decisions, you don’t frie the minds of your goalies, Peter roulette got lucky, real lucky, and Paul correct here, if flyers commanded half the interest the eagles or phillies have, this coach would be toast by the media/fans

Peter just got too cute. Boosh was definitely the go-to goalie. Laviolette has been trying to use his goalie-pulling tactics to settle down his team and it finally bit him in the ass.

On a side note, Ryan Miller is either extraordinarily awesome (2 shutouts) or average at best with a 4.0 GAA in the other 4 games (5 GA in game 2, 3 GA in game 3, 3 GA in game 5, and 5 GA in game 6). Without him in goal, the Flyers sweep the Sabres. While I want to say great goal-tending isn’t as important as it used to be, it is amazing how much Miller means to their team…….EVERYTHING!!!

Either way anyone looks at it,
If the Flyers play like they have over the course of this Series (Goalie wise),
I am not so sure they can compete with any of the other playoff teams left in the Eastern Conference. The Sabres had 2 games in which they blew 2 & 3 Goal leads which you can’t plan on happeneing with the other teams remaining in the Eastern Confenrece playoffs.. The Flyers have outplayed the Sabres as a whole, but they are fortunate to still be alive in this series too..

i agree paulman, but all this talk about goalies is weird, too. I mean Luongo, up for the Vezina this year, was BENCHED for yesterday’s game. I would trade half of our team for Luongo…….since that won’t happen, I will start the “Get Tomas Vokoun” bandwagon up for this offseason. With Carcillo’s and zherdev’s contracts up at the end of the year, that’s a little over 3 mill available. Then they can also waive shelley and matt walker and trim another 3-4 mill to make vokoun a good offer.

This 1st Round of the NHL Playoffs have been all over the baord so far..
(besides the usual effective Detroit Red Wings) almost every other team has some issues either about Goalie, Scoring, Penalty Killing, Defense, etc,etc…
These 1st Round Series and games have been great so far and the series and games will only get tougher here on out and as usual, the team that can stay healthy, ride a hot Goaltender and have some Good Coaching moves and get a couple of breaks along the way usually comes out on top in late May/Early June..