Roger Goodell Made A Mistake By Calling Ocho Cinco 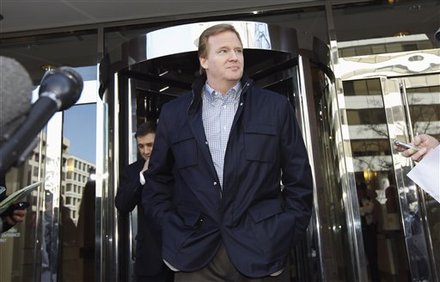 NFL Commissioner Roger Goodell made a major mistake by calling Cincinnati Bengals wide receiver Chad Ocho Cinco. Prior to his call, coaches were ordered to not have any communications with their players.

“He tweeted me out,” Goodell told USA Today. “He asked me to call him. I talk to players all the time.”

When quizzed about whether it was okay, NFL spokesman Greg Aiello brushed it off as if it were no big deal because it was social call and had nothing to do with football.

Some of the coaches will keep the conversation limited to nothing but a cordial talk to check up on the guys, but other coaches will start running practices through these telephone calls. They’ll be finding out exactly how many players are attending the practices. Others will begin scripting the workouts through their quarterbacks and team leaders.

Bottomline, the Commissioner who is trying to make everybody think he’s above the battle between the owners and the players is clearly on the owners side of the battle because they’re paying him $11 million dollars a year.

Sixers Youngsters, Holiday And Turner Come Through Under Pressure

Kafka Doesn’t Think Teams Are Making Offers For Him

And I thought MLB Commish B Selig was bad, this Roger Goodell is no leader and how he even got this position is beyond me.. He’s just a patsy that the Owners throw out there in front of the Media and has little substance and ideas..

Paulman, i almost feel bad calling you out all the time but you say the worst things sometimes.

“this Roger Goodell is no leader”… 2 things… 1) if “this” Roger Goodell is no leader.. is there a different Roger Goodell somewhere that you think IS a leader? 2) The man has done a GREAT job leading the NFL. a) he’s been working hard for years to try and make the game much safer. He’s been working on conccussions prevention LONG before it has become a buzzword on every flippipng play. I dont like all the changes to the game but it has been good for the players. b. He has done a great job keeping these players in line. Suspending plax, vick, stallworth and such HAS sent a clear note to the players that if you act like a thug you will find yourself on the outside. c. right now…. MOST people blame the players more than the NFL owners over this mess… Goodell has done most of the work keeping the owners together. As far as him being a “patsy”…. thats bogus; both players and owners respect his leadership. Bottom line….. he has done a great job of leading the NFL.

Owners and politicians are two of the same…….. @Stevo…….. You hit the head on the nail…….. Goodell has done a great job as far as the proper safety precautions with the concussion issue…….. With him seeing eye to eye with players of youth……. This is a new generation of players/lifestyle…… I think he’s handled his job as commissioner pretty well……

That’s ok Stevo.. Just a difference of Opinion..
I think the NFL has improved in Player Safety which is a good thing, but the overall quality of play has dropped in recent years, as it has in all sports as fundamentals and becoming less and less stressed and players going for the big hits, the big plays to make the ESPN highlight shows..
The NFL Europe was a failure, the games in London every year stink, The growth of the SPort under Goodell has grown tremendously which he and his office do deserve some credit..but this lockout was 2 years in the making and what has he and his office done about it..not much in my book and now he is going to sit by and state that I as the Commish am above all this legal mumbo, jumbo and will get out of the way for the 2 Parties to settle it..
He could have been much more proactive last year and pushed and used public opinion to get this thing settled out behind the scenes, and for this I say he’s failed and so us as fans, are the ones who suffer and will foot the bill for these Owners and Players as higher ticket prices,higher merchandising fees, and less quality level of football on the field..

I agree. I’ve often said that Goddell is ruining the game of football. His many double standards are a source of trouble.

too many rules which slowdown the game and the Officiating has gotten worse too but I guess he’s not repsonsibile for that…and he difinitely has been inconsistent on how he has come down hard on some players and then not at all with other players, no consistency at all ..

guys are you kidding me? You know the 2 sides were not going to work anything out until the deadline was over. Its a game of chicken and neither side is willing to work this out.

as far as the refs- i agree it needs to be better but at least these guys havent been caught cheating like in the NBA.

the rules- Times are changing guys and I dont like it either but its not goodell who makes the calls, blame it on the coaches that are on the rules commitee. Take the players for example- the NFLPA wants to make the game safer and then we hear of players that bomb their test going into the league so they have an easier time getting back on the field after a head injury (see florios report on that at profootballtalk).

It seems to me guys that you just want a name and face to attach blame to our current situation. So for you it will be goodell. I instead will blame the lawyers (whom the players hired) who are trying to destroy the draft and FA.

I am just to blame it on Presidents GW Bush and Obama to cover all basis ..
and then throw in Former Secrty of State Condi Rice for it has been her who is conspiring behind the Scenes since she really wanted that NFL Commish Position..

ill take that Paulman as a white flag.