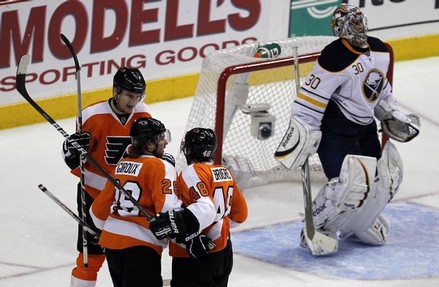 Game Sevens can be a nervewracking affair- the season’s on the line and all it takes is a split-second decision to put your team down. For the Philadelphia Flyers, though, they’ve been through enough Game Sevens to know how to clinch a victory.

Tonight’s 5-2 win over the Buffalo Sabres was arguably the best game they played all season. From the drop of the puck, they fought for every puck possession and pressured the Sabres into numerous turnovers. The Sabres seemed to have run out of gas after nearly clinching the series in Game Six.

“I think it was just a byproduct of how we played. We didn’t really give them any life or any room to move out there,” said Chris Pronger.

The Flyers dominated so well that they outshot the Sabres 15-2 in the frame. “Yeah, 16-2 I think, but who’s counting,” said Mike Richards. “Yeah, we played well. Ryan [Miller] made a lot of big saves, a bunch on me. I couldn’t beat him this series unfortunately, but we threw everything we could at the net.”

It was worrisome that despite the efforts, the score was still tied 0-0 towards the end of the period. Then, with 19 seconds remaining, Braydon Coburn tallied his second career playoff goal and sent the Flyers to the dressing room with the lead.

Playoff machines Danny Briere and James Van Riemsdyk continued to carry the team with back-to-back powerplay goals.  It’s amazing how much of a difference having Chris Pronger in the line-up does to the teams success with the man advantage.

Briere suggested that the team also re-focused on the powerplay before Pronger’s arrival. “It’s something we started talking about after Game Five. We realized we were forcing too many plays instead of controlling the puck and taking the shots. I think early in the series, you start pressing. Its 4, 5, 6, 7 [failed powerplays], it starts building and you start pressing. The crowd gets on us and you start taking bad shots.”

The penalty kill was nearly flawless aside from a Brad Boyes goal late in the third period. The team actually limited the Sabres to 0 shots and 0 chances on their first powerplay.

Ville Leino and Dan Carcillo scored in the third period to secure the win. Although I don’t think Carcillo will be re-signed in the offseason, he has played very well in this series. He controlled himself for the most part, though he and Nathan Gerbe were both assessed game misconducts towards the end of the third period after Carcillo taunted their bench.

Despite all the ridiculousness of the Flyers’ goalie changes throughout the series, every win was earned with Brian Boucher in net. He may have had a terrible Game 5, but he was the common denominator in their success.  Although he was barely tested in the first period, he was brilliant in the second period whenever there was a loose puck in the crease.

“Resilience is an understatement for him,” said Mike Richards. “It’s not the easiest situation to be put in, coming off the bench like that in two of the games down a pretty good number too. He stepped in [and] he didn’t worry about what he couldn’t control. He just played and made a ton of huge saves at times that we needed him to.”

While the Flyers may have finally clinched their second round berth, the Montreal Canadiens forced Game Seven with the Boston Bruins tonight. That means it will be a few more days before anyone knows who to boo.

Six Players The Eagles Will Select In The 2011 NFL Draft

I used to hate Carcillo and his dumb penalties, but he played smart and intense hockey this series. If he keeps it up, he might look good in orange next year.

I still rather has A Asham on my team over Garcillo any day.. Though Garcillo did have a pretty good Sereis overall ..

I do love Asham too.

I said this on another site but, that series was the equivalent of the Pearl Harbor bombing. Buffalo really woke up this sleeping giant and there is gonna be HELL to pay!!!

You always have to have a wildman like carcillo on your team, someone that will take it to the limit and will cross the line… but he played very well this series. So did billy leino, I was very impressed… and there was a Hartnell citing!
Were gonna need our best players playing there best, richie hartnell and others… we won’t win a thing if they play as inconsistent as they did in this series

Bring on the B’s. Should be another tough series with Boston having a chip on their shoulder from last year’s fiasco and having Tim Thomas between the pipes (up for another Vezina this year). But I don’t think that’s enough to help them win the series and I think the Flyers win the series 4-2. It won’t be an easy 4-2 win, though. I think it will be 2-2 after 4 games and then the Flyers win out.