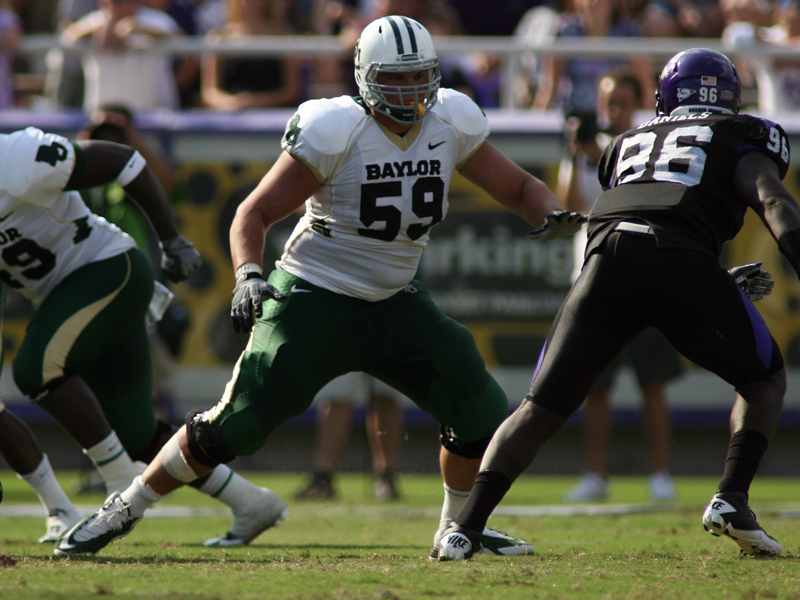 I must admit that I was shocked that the Eagles selected Baylor right tackle, Danny Watkins with their first pick to come here and play right guard for this football team. Howie Roseman was obviously blowing smoke when he said the offensive line is deep in this draft.

How could they draft a right guard with their first pick despite the fact that their defense was historically bad at keeping teams out of the end zone?

There were a number of outstanding defensive players still on the board when the Birds picked, but the Eagles grabbed a 26-year-old fireman, and former hockey-playing Canadian. Watkins who will be turning 27 before the season, starts has only a few years of playing before he’s reaches the magical age of 30.

Watkins has a mean streak and he can be a dominating player.I think he’s a good football player and will do a good job at the right guard spot for the foreseeable future, but that’s not the point. The point is that we need immediate help on the other side of the football.

How do you explain the team not addressing a more pressing need on their defensive line? There were numerous defensive studs still on the board. What about Cameron Jordan, or Cameron Heyward or Da’Quan Bowers or Jimmy Smith?

Yes, they needed help at right guard, but why couldn’t they have gotten a good right guard in the third or fourth round. You’ve got to

be big and strong to play guard, but unlike at the offensive tackle position, you don’t have to be an outstanding athlete.

If the Eagles were a running team that needed a monster at offensive guard like Shawn Andrews used to be, I could understand using a first round pick on a right guard, but the Birds don’t run the ball. All this guy is going to do is pass block and get out in front of screens.

I thought they needed to get some defensive help with that pick. This defense can’t rush the passer and I don’t care who is coaching

these guys, they can’t rush the passer.

When the playoffs come around, the Eagles defense will enter it without a pass rush and we will be experiencing the same disappointment we have dealt with for the last decade.