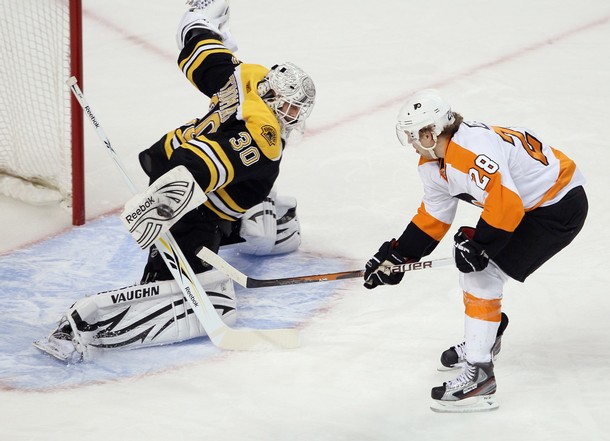 In the post-game press conference after Game Seven, Chuck Gormley of the Courier-Post began to ask Chris Pronger who he would prefer to face in the Stanley Cup Semifinals.

Smiling, Pronger cut him off and said, “How did I know that was coming out of you? I guess we’ll find out in a couple days, won’t we?”

Thanks to overtime heroics from Nathan Horton on Wednesday night against the Montreal Canadiens, the Boston Bruins will be the Philadelphia Flyers’ opponent for Round Two.

From a head-to-head perspective, the Flyers appear to be the slightly better team. The Flyers’ powerplay, as bad as it is, looks elite compared to the Bruins 0.0% conversion rate in Round One. The Flyers tallied 0.71 goals-per-game more than the Bruins and had similar defensive statistics. Boston, on the other hand, won more faceoffs in their series with the Canadiens.

Goaltending is not the enigma that it was less than a week ago, as Brian Boucher is the clear starter for Philadelphia. Boucher earned a 2.10 goals-against average (GAA) and 0.934 save percentage (SV%) compared to Tim Thomas’ 2.25 GAA and 0.926 SV%, though Thomas’ stellar performance in the regular season suggests the Bruins have the advantage in net.

What worries me the most about this match-up is what a series win will cost the Flyers. There is no way they are all making it to the Eastern Conference Finals after embarrassing the Bruins in 2010. The Bruins’ pride was crushed after Game Seven and I wouldn’t put it past Milan Lucic or Shawn Thornton to take dangerous runs at the orange and black if they think it will give them the edge.

That’s not to say that the Bruins are a dirty team. I just think the gloves will be off from the first drop of the puck in this series, and they will do whatever it takes to not make this a repeat performance.

I’m calling it now- either Jody Shelley or Zac Rinaldo will make an appearance in this series.

As far as other predictions, I’m picking Mike Richards to have his breakout performance. Richards performed well at shutting down the opposition and killing penalties against the Buffalo Sabres, and despite the fact that he couldn’t beat Ryan Miller himself, he assisted on several key goals. His pass to Nikolay Zherdev through the crease in Game Three allowed the Flyers to take the lead in the series.

Call me a homer, but I’m taking the Flyers in six.

On the injury front, there is speculation that Jeff Carter may return later in this series after his knee-on-knee collision with Tyler Myers. There has still been no update on Andreas Nodl, who suffered a facial injury in Game Two, other than that he is “day-to-day with an upper body injury.”

Game One starts at 3 PM on Saturday at the Wells Fargo Center. For the latest Flyers news and in-game updates, you can follow me on twitter (@JoshJanet).