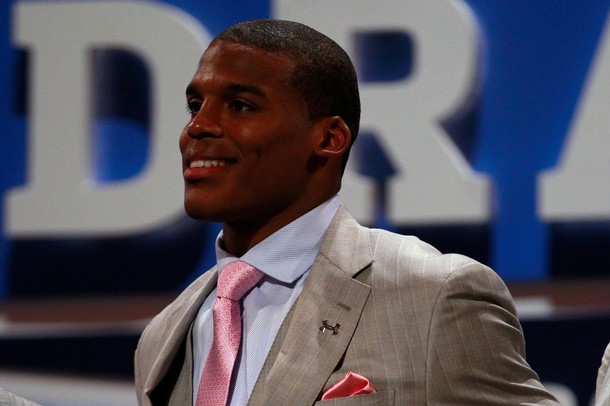 If there’s one thing I’ve learned about NFL Mock Drafts, it’s that they’re pretty much useless after the fourth overall pick. After that trades are likely to start occurring and/or some stud who caught everyone’s attention at the NFL Combine isn’t as high on team’s boards as perceived.

The first round of the 2011 NFL Draft came and went pretty quickly (except for when the Baltimore Ravens were on the clock).

There were quite a few surprises, starting with Atlanta’s trade with Cleveland. A record 12 defensive linemen were selected and Clemson’s Da’Quan Bowers wasn’t one of them.

Four quarterbacks were selected in the first twelve picks and our Philadelphia Eagles are assigning a 26 yr old ex-firefighter to help keep Michael Vick healthy.

Pick by pick, here’s my take on the first round….

Haran, good article man, I still feel they have a plan to get rid of kolb, and get a DB (multiple dbs) LB DT DE SS K

My issue is the Giants have outdeafted us the last 3 years from similar draft positions with similar needs.
Pierre-Paul > Graham
Nicks > Maclin
And now they take Amukamara when the Eagles have a major need at CB and had ample opportunities to trade up. Cmon Eagles.

However, every time we pass on a CB I tell myself its ok we will sign Asomugha.

Mim, I was thinking along the same lines… the giants keep drafting guys we need… though I like maclin… pierre paul will have a good future bc he has the size strength speed and smarts… graham is on the smaller side so idk… I hope ur right about nnamdi

Hakeem Nicks and Jeremy Maclin are a wash. No one got the upper hand there.

Good analysis Haran, a little tough on the D Watkins pick,
I think he has the goods, the smarts,the maturity and work ethic to be a Starter at RG from Day 1 and remain there for the next 5-6-7 years and maybe even compete for a starter’s Spot at RT in 2012 I will take that with a 1st Round Selection any day..
As far as is age, a 3 Year Starter at Baylor at LG and then Lt for last 2 Seasons, this guy is tough and versatile and the fact that he’s only played organized Football for 5 years means his 26/27 year old bod is not beat up yet.. he will give the Eggles a good 5-7 years..