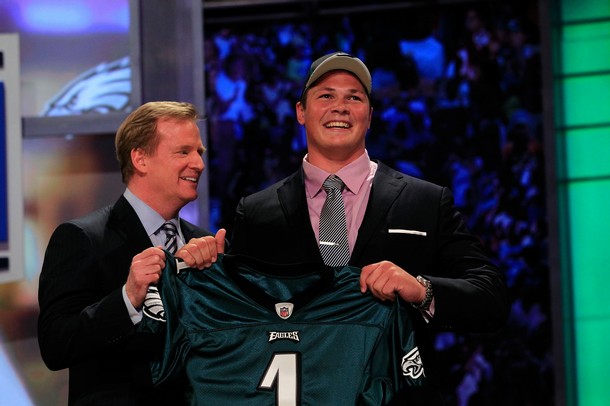 The 2011 Draft has come and gone. Unfortunately, nobody knows for sure when the next time there will be consistent talk regarding the NFL.

The 8th U.S. Court of Appeals could reinstate the Judge Susan Nelson’s injunction by tomorrow. They also could also issue a permanent stay, causing the lockout to last possibly another two months.

Due to the labor issues delaying the beginning of the 2011 NFL league year, the Philadelphia Eagles were unable to trade away Kevin Kolb and the chance of Andy Reid drafting cornerbacks Patrick Peterson or Prince Amukamara.

As a matter of fact, because players under contract could not be traded over the weekend the number of NFL draft day trades dropped drastically from 34 in 2010 to 22 this year.

Regardless of when a new CBA is reached and normalcy is returned to the NFL, decision makers in the 32 war rooms had to make do with what they could control.

At the NovaCare Complex, the Eagles started with 10 draft picks. After four trades, they selected 11 players and added a fourth round selection for 2012 (from Baltimore).

How did the Philly do?? Of course, it’ll take a few years to really know. But, initially, let’s look at the Eagles 2011 Draftees…..

1. 1st round (No.23) Danny Watkins-OG (Baylor): The Eagles top priority is protecting Michael Vick now that he is the face of this franchise. The offensive line’s weakest link was right guard and Watkins could probably start from Day 1. The concern about him is he’s 26, but that’s the only real negative for possibly the best guard available. If Watkins was 22 he’d probably have been a top 15 pick.

2. 2nd round (No.54) Jaiquawn Jarrett-S (Temple): Jarrett was considered a 3rd or 4th round pick by many scouting reports so he must have really been impressive his workout at the NovaCare Complex. He’s known for playing the run well, so he should form a good tandem with a ball hawk like Nate Allen.

3. 3rd round (No. 90) Curtis Marsh-CB (Utah St.): The Eagles definitely need a cornerback, but don’t expect Marsh to be starting across from Asante Samuel next season. The former running back has a lot of upside, but will need a lot of coaching to reach his potential.

4. 4th round (No. 116) Casey Matthews-LB (Oregon): Casey is not as athletic as last season’s Defensive Player of the Year runner up Clay. He makes up for it with a strong work ethic and a high football IQ. Anyone who watched the BCS Championship knows he can play.

5. 4th round (No. 120) Alex Henery-K (Nebraska): Drafting a kicker in the fourth round is equivalent to a quarterback going No. 1 overall. The Eagles know they have to eventually replace David Akers and might as well do it with the most accurate kicker in NCAA history. Henery also punted as a Cornhusker so he could possibly be Sav Rocca’s replacement along with Akers.

6. 5th round (No. 149) Dion Lewis-RB (Pittsburgh): Lewis should be an excellent compliment to the guy he replaced at Pitt, LeSean McCoy. He has great vision and help with the passing game. Look for him to be used on 3rd downs.

7. 5th round (No. 161) Julian Vandervelde-OG (Iowa): Vandervelde was a Hawkeye teammate of defensive coordinator Juan Castillo’s son, Greg. He started at both left and right guard and has the potential to be a competent backup.

8. 6th round (No. 191) Jason Kelce-C (Cincinnati): At 6’3, 282 lbs Kelce is a bit undersized, but is known for his footwork and toughness. The Eagles track record for draft picks from Cincinnatti (Trent Cole and Brent Celek) isn’t too shabby.

9. 6th round (No. 193)Brian Rolle-LB (Ohio St.): Rolle makes up for his size (5’10”, 230 lbs) with his athleticism. The Eagles could use him as a passing down LB or have him play safety. Either way, look for Rolle to be very effective on special teams.

10. 7th round (No. 237) Greg Lloyd-LB (Connecticut): The Eagles used their first compensatory pick on the son of former Pittsburgh Steeler Greg Lloyd, St. His draft stock likely dropped because he didn’t fully recover from a December 2009 ACL injury as of yet.

Case11. Stanley Havili- RB (USC): Havili should fit well in the Eagles offense due his ability in the passing game. He quite possibly could be used as the third halfback.

Overall, if I had to grade this draft I’d give the Eagles a B+. They didn’t draft a stud expected to be a rookie Pro Bowler. But, they addressed multiple needs.

In the first two rounds, Reid selected guys who’ll likely start as rookies. The rest of the draft addressed much needed depth and special teams.

This offseason is far from over. When the new league year begins the Eagles will be in good position to make a lot of noise in free agency.

Report: Eagles Had Kolb Deal In Place With Cardinals Before The Draft

I hate to say it but here was a typical Eagles move: Traded down in the third round and picked up something like a sixth round draft choice. Two cornerbacks were taken in the two slots before the Eagles picked in the third round. The guy they took is a back up, only played cornerback two years, and I hate that smart guy thing where the Eagles say to themselves, “Ah, as long as we get one of them we’ll be ok.” I bet the other two corners taken before Marsh are better prospects. If someone can shed any light on this, I’d love to hear it. I don’t like being last in line.

You said it yourself. “prospects”. Thats what these guys are after the 3rd round. You trade down in order to obtain more picks, so the odds of hitting a good player goes up. You say the two CBs picked ahead of the one that the Eagles drafted are “better prospects”. Based on what? Mock drafts? Expert analysis? Lets be honest, none of us even seen or heard of these guys before the weekend.

fansince – um, and you know that those other CBs will be better than Marsh, how? And you know that they say to themselves, “Ah, as long as we get one of them we’ll be ok.” – how? I highly doubt they said that. Most likely, they looked at the 2nd tier CBs, after Peterson, Prince and Smith, and liked this kid the most. And knew where they can get him. Now why have you written THAT theory off fansince? Hunh? If you’re last in line, and the people in front of you picked duds, what’s the problem. Remember the McNabb QB draft? Akili Smith? Common….

Schiller why are you referring to the past?

wright out of usc was taken 1 or2 picks ahead of us . they might have targeting him . he is a known commodity , but will he be better than marsh who the hell knows .!

E – because it’s relevant. I never said that nobody should ever refer to the past. I said that I think its counterproductive and bad to wollow in past defeat/anger/frustration. You are just trying to catch ever ‘gotcha’ moment in some juvenille game.

Marsh has better upside in my opinion that CB S Wright from USC
Wright is quicker but at 5’10 is another J Hanson type, small and scrappy player but I am not sold on him making plays on the ball while in the air, which Marsh has the size and physicality that the Eagles need and were looking for
Some other big CB’s went in the 5th Round I liked too
B Burton to the Vikings , C Rucker to the Colts

Lindley is a monster…you ll c this year… he’s very similar to Tramond Williams cb for the packers… all he did was make plays in college, a lot plays while the ball was in the air, I see him having a break out season this year…

Marsh is the wildcard to the Eagles draft…. if he can reach his potential, its a very good draft.. I really like Brian Rolle…

Jott I’m with you on rolle, he’s really good, he can cover side line to side line very well… can cover the rb very well too, something we haven’t had here ever! He projects well to the league, so does jarrett and my dude casey matthews… like you said marsh is a wild card he could come out and suprise everyone anf play very good…

Probably one of the final LB roster spots will be between Rolle and Clayton who play a simialr style.. Both are on the smallish side, Rolle is more physical and a better tackler,Clayton is faster and could be used in many packages and probably pass-rushes better
The Negative on Clayton is that he’s not a real consistent practice player and that he appears to really only be focused and raring to go when the bright lights are on..Rolle is a bring your lunch pale to work everyday type of player and if Clayton isn’t practicing ahard and bringing it everyday, Rolle will outwork him.. This will be a good battle to watch ..

All of you supporting the Eagles with a “wait and see” attitude are amusing. I’ve been waiting for 12 years for Reid to demonstrate he can draft top notch players. For the gross total # of picks Reid has made in 12 years, he has very little to show for it. With approximately 100 picks, he has how many great players………0, how many really good players, Maybe 5, how many good to average players, 10-15, how many 1st or 2nd round busts…..8-10! You can’y miss as bad as he does on high draft picks. If you think I’m exaggerating, just add them up, Jerome Mcdougle, Matt McCoy, Victor Abimiri, Bunkley, Barry Gardner, Quinton Caver, Reggie Brown, Todd Pinkston, and that’s quickly off the top of my head. There is NO REASON to think all of a sudden he will improve. His picking these guys insures they will not be difference makers.

donovan mcnabb, lito sheppard, sheldon brown, michael lewis, jeremy maclin, desean jackson, Nate Allen (a little early, but looks like a good player), LaSean McCoy, Mike Patterson (solid, but no superstar for a 1st round), Shawn Andrews (before he lost his mind…and will), corey simon…..all picked in the 1st or 2nd round and weren’t busts….rastadoc, I think you’re exaggerating

you should see the drafts BEFORE Reid….Jon Harris anyone? Oh, maybe you remember the great 1st round pick in ’94 Bernard Williams that DOMINATED the league. Or maybe Mike Mamula…the sack master. Bruce Walker, Lester Holmes, Leonard Renfro, Siran Stacy, Tommy Jeter, Antone Davis, Jesse Campbell…..all 1st or 2nd round picks from the 90’s before Reid.

The best players from these first 2 rounds were Bobby Taylor, Charlie Garner, and Jermane Mayberry.

Schiller, one of those 3 cornerbacks had to be a more attractive player. The fact that the Eagles traded down makes me conclude they didn’t care which one they got, and certainly not like they were so smart that they knew that the last cornerback left was the one they really wanted. I don’t believe that.