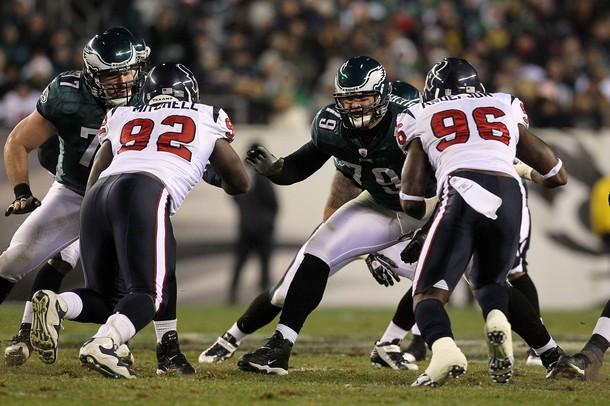 Last week Andy Reid left the door open to the possibility of moving left guard Todd Herremans to right tackle. Reid had talked about keeping the possibility open of playing number one draft pick Danny Watkins at left guard rather than at his assumed right guard position.

Yesterday he went on Mike Missanelli’s show on 97.5 The Fanatic and almost totally eliminated that possibility. It seems that the key to that change of mind is the fact that Reid and his coaches got the chance to see how far Justice has come in his rehabilitation from his knee surgery.

“I think we’re pretty solid at that tackle position,” Reid said. “ I think Winston or King will work that right side and then [Jason] Peters is pretty well locked in at that left tackle spot. …

“King Dunlap stepped in at both right and left tackle last year and showed us that he can play, so that gives us a little flexibility there, and Winston’s coming back off the [knee] injury and I think he’s actually doing pretty good.”

“When we had the few hours [Friday] when the lockout was lifted, we had the chance to visit with [Justice], and I think he’s good to go. Herremans does give you that flexibility, too, because he played tackle in college and he came in and has been a guard since, but he can play either side guard or either side tackle, so we do have some flexibility there. Right now, that’s probably not going to happen. He’s probably going to be playing guard and Danny will be playing guard.”

Notice that he didn’t close the door totally, but left a little bit of light. I’m sure if Justice doesn’t play well, then he’s open to changing his mind.

Surprise, Jayson Werth Is Cheered In Return To Philly