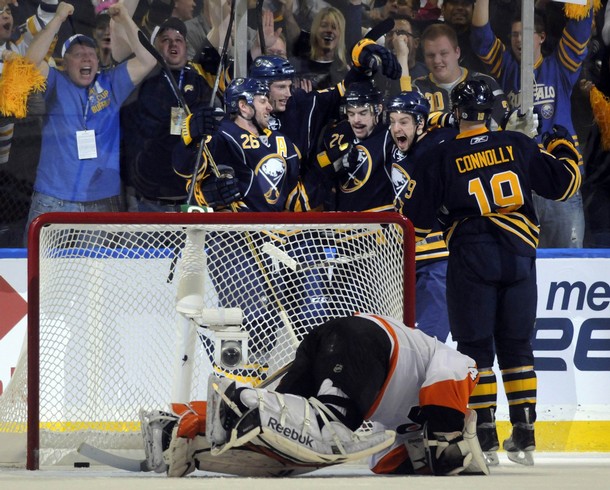 Less than a week ago, CSNPhilly quoted Ed Snider as stating, “We’ll evaluate everything when the season’s over.”

Unfortunately, the season is over and it’s time for looking back while looking ahead.

There is no position that has earned greater controversy for the Philadelphia Flyers this season than that of the goaltender. The Flyers have now gone 100 games straight without a shutout and rotated three average goaltenders throughout the 2011 playoffs. Although goaltending was not the main problem for the orange and black, it is clear that the organization needs to make a change.

As a recap, here are the goaltenders from the past season and their current contracts:

Brian Boucher will not likely be back. He was signed with the expectation of being Ray Emery’s back-up in 2009 and was given the benefit of the doubt that he could take over in the event of injuries, but he hasn’t stood out enough to earn a new contract with the goaltenders the organization already has.

This is not intended to be an indictment of Boucher. In spite of the embarrassment of watching the goaltenders pulled again and again in the playoffs, Boucher was decent in all but Game 5 of the first round. The team in front of him was just that bad.

It’s still possible that a tandem of Sergei Bobrovsky and Michael Leighton could start the 2011-12 season, but the organization seems to have fallen out of favor with Leighton. They were obviously disappointed with the fact that he hid his back injury when they signed him, and his performance in Game 6 was atrocious.

It’s also telling that Leighton has been out with an “upper body injury” since Game 6, and yet of all the players who have been listed as needing offseason surgery, his condition is still an enigma. Leighton has reportedly said that he is injured, but nobody knows with what.

Leighton told Chuck Gormley that he still wants to be the “No. 1 guy.” He also said, “Every article you read, the talk is you have to get somebody. Whether they do or don’t, that’s not my choice.”

I can’t say I disagree with “every article you read,” but I’d still like to see the organization give him the chance to fight for a back-up position with Sergei Bobrovsky. No matter who ends up in Adirondack, it will be a boost to a Phantoms team that performed well with Leighton and Backlund in the latter half of their season. For an organization that dips heavily into the college market pool, solid goaltending will help with their prospect development.

Between Brian Stewart and Nicola Riopel, I would expect the team to drop Riopel and maintain Stewart. Stewart is still a ways off from being ready for the NHL, but he is certainly ready for the AHL once there is room available.

Having addressed what we have, I will address the options available in free agency tomorrow.

Which One Of Philly’s Pro Teams; Eagles, Phillies, 76ers or Flyers Is The Most Accomplished?