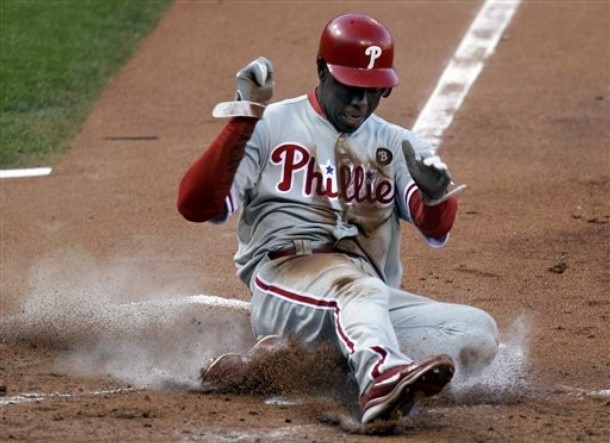 The Phillies will take the field tonight in danger of losing four games in a row, which is something we didn’t think could happen with this club and their group of outstanding starters.

Last night, the Phils hitters continued to struggle scoring runs, as they absorbed another loss, this time it was 3-1 to Cardinals. They managed only five hits against Jake Westbrook, who entered the game with a 6.92 ERA. The team’s starters continue to know that they have little room for error each time they take the ball.

The Cardinals walked Ryan Howard three-times and may have started a trend which might continue. Avoid Howard by walking him and dare any of the other Phillies to beat them. The Phils continued to be the only team in Major League Baseball with their two corner outfielders, Raul Ibanez and Ben Francisco batting less than .230.

Francisco did drive in the Phils only run by singling in John Mayberry, who continues to start in centerfield, until Shane Victorino returns from a hamstring injury.

Ace lefthander Cliff Lee couldn’t get the ball over the plate as he walked a career high, six batters, while allowing six hits and giving up three runs. Lee pointed the finger at the home plate umpire, Gerry Davis.

“I felt like I threw a lot of strikes that were called balls, but whatever,” Lee said. “It is what it is. I’m the pitcher. He’s the umpire. It’s [home-plate umpire Gerry Davis’] job to call balls and strikes, and he felt like they were balls, I guess. It is what it is.

“It’s my job to throw strikes and force the other team to swing the bat. They made me throw a lot of pitches and drew a lot of walks. I’m typically not a guy that walks a lot of guys, but for whatever reason today that happened.”

Roy Oswalt Is Activated And Will Start Tonight In St. Louis

8th Distict Court Rules For The Owners, So The Lockout Continues

When Jake Westbrook is pitching and you only come up with 1 run thats not good the pitching has kept the Phillies in every game with a chance to win but right now the Phillies have to many minor league players on the team.

This is why I dubbed this 2011 Phillie Team in Febuary/March from the “Phitin’ Phils” to “Phillie Lite”. This line-up won’t put a scare into any staff, If I am an opponent, I would even throw a strike to Ryan Howard and let one of the other players beat me.. It’s a shame to be wasting all thse good pitching performances..

Paul, put a sock in it, we all know what you said, wait until the end of the season, if you are right, phils win only 92 behind braves, early exit in playoffs, then you can crow all you want, until then, let us enjoy the season

We”ll see how they end up– but no way, shape of form is this Team going
to win over 100 Games with this line-up (they are averaging a tad less than 3 Runs a game over the last 20 games…) This is not a hiccup or team slump,
this Batting Order is middle of the road anyway you slice and dice it..
Here are some sobering Batting Stats for the Team Season to Date

Here is the Stat that concerns me the most, Against teams with Winning Records, The Phils are a mediocre 8-10 this Season
(In games vs the Braves,Marlins,Milwaukee and now the Cardinals, they are 8-10 which means they are beating the bad teams like the Mets,Nats,Astros,Padres & Diamondbacks) but how are they going to perform against the better teams that have better pitching like Cardinals,Reds,Rockies,Giants,Dodgers,etc,etc, then 15 Games in Interleague play versus teams with solid Pitching like Oakland,Seattle,Texas,Boston & Toronto…
Right now the Phils are 25-15 after 40 Games with better teams on their schedule to play. To win 92 Games as I predicted, they would have to go 67-55 which is a .550 Winning % which is about what I expect..
For those predicting 100-110-115 Wins, the Phils would have to play at a almost .610 to .700 Winning % which is not going to happen with this line-up..

Make this “Phillies Lite” Team now 8-11 on the Season versus teams with
winning records (Above .500).. Another fine Pitching effort wasting again..
The Phillies had 5 hits .. This is getting brutal to watch..