Report: Eagles Will Be First Team To Approach Plaxico Burress 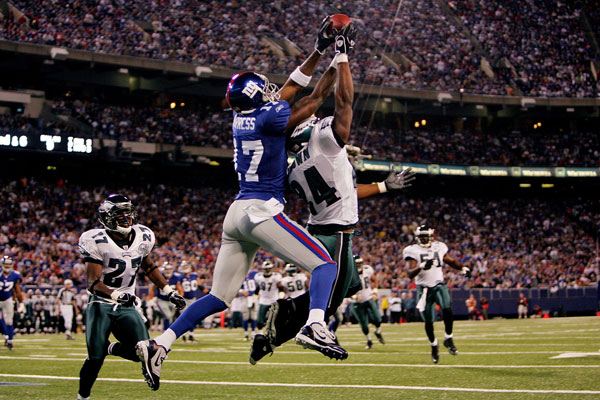 Gary Myers of the New York Post says he has heard that the Eagles are going to be first in line to sign former Giants wide receiver Plaxico Burress, when teams are allowed to sign free agents and the mammoth wide receiver is released from Oneida Correctional Facility in upstate New York on June 6.

If that is indeed true, Birds head coach Andy Reid no doubt wants to use Burress’ size to help the Eagles in the red zone. The former New York Giants wide out dominated former Eagles cornerback Sheldon Brown when the Giants played the Birds during their tenure with their respective teams. Despite the fact that Brown was a good cornerback, Burress had a six-inch height advantage on him, plus he’s got extremely long arms and very good hands.

Burress allowed Giants quarterback Eli Manning to just throw the football up in the air while knowing that he would bring it down. He was very good on broken plays, come back or slant routes because if gave him the chance to screen the defensive back off the ball.

It must have made quite an impression with Philadelphia’s front office.

He had the ability to screen off a defensive back and make plays on the football. Burress stands 6’5″ and weighed 233 pounds back in 2008 when he last played in an NFL game.

Like Michael Vick before him, who the Birds signed after he was released from prison, Burress will take a while to get in shape. He hasn’t played in a game since November 16 of 2008.

Vick has said the past that he had wanted to reach out to Burress when he gets the chance. If the Eagles sign him, Vick might be able reach out to him in the locker room this season.

Michael Lombardi: If Kolb Had To Play Last Year Eagles Would Have Been 7-9

Hey if he can still play, sign em up. Another weapon for Vick & the boys. Hasn’t played since 2008 though. Was reported that he lost 20 pounds since being in jail. Gonna have to work out hard first.

YESSSSSSSS SIR BUDDY!!!!!!!! Lets do it baby! Red zone threat and Superbowl here we come! It’s about time the FO finally ‘grows a pair”. Before you haters that hated Vick before he came here and got the nod to start, begin bashing this supposed move, look where #7 took us, and with burress we’d be unstoppable.

What about Riley Cooper? or Jason Avant? perhaps they will be part of a trade if we do sign him? I mean it will take a lot of time perhaps a whole season before he can play especially with the lock out but if he succeeds on the field then Riley Cooper may be gone which to me sucks. If Riley went to the Patriots he would become a star WR.

Burress would be for 1-2yrs Max…Riley Cooper has a lot to learn and isnt ready….he can learn from Burress how to use his 6-4 frame to screen defenders…. look at the Packers playoff game on the Vick interception….Cooper didnt even try to screen the defender to get the ball….he waited on it… Burress would have snatched it up.

Riley was a rookie jott how many rookie WR’s come in the league their first year and do exceptionally well? he was drafted in the fifth round at that and did pretty well until the injury. Im not knocking signing plax but this is a report for a new york guy what the hell does he know about what goes on here?

Wait Jott I see what your saying that he can learn from Plax.. which is true but I dont think the eagles will sign plax just to be a teacher. If he does well then someone has to go.

highly unlikely. don’t see it happening. if he can still play why not though.

If he can still play, why not? That is a big if though. He would be a great red zone target and it would potentially keep him from killing the Eagles like he did for years.

LOOK>>>>>> This guy was an Eagle KILLER!!!!!!!!! I went to school with this guy and he is like the most well rounded athlete from soccer to basketball and track as well……. I would love to see the VA Connection join forces and make things happen…… I pretty sure Vick’s been writing him and they’ve became close because Vick can relate to his situation……… WOuld the eagles have a six game winning streak against the Giants if Plex was a free man??????? We would never know but his #’s against the eagles is just un-real……. I was high on the kid Brandon Gibson when the Eagles had drafted him……. Perhaps we do get Plexico and trade Cooper and he’ll become a solid #2 elsewhere……. It wouldnt hurt to get plexico……. Green Run High School Virginia Beach ALL DAY!!!!!!!

Plex wants to be on a team with a coach who breathes down a players neck like Tom Coughlin…… And Im pretty sure Plex would like to get away from Mayor Bloomberg with his laws in NY when you carry a gun you receive a ton!!!!!! He needs to be an Eagle…… Ink him in on a 2 year deal the same as Vick with incentives and see what he can do…. Make him the 4th wr……… He would kill in the slot like Colston for the Saints……..

I can see a lot of teams going for him when he’s released…… Everyone is going to follow suite to what the eagles did for Mike Vick!!!!!! Bunch of Biters!!!!! Or Jerry Jones could be in the race to get him as well!!!!!

R Cooper is nothing more than the #3/#4 WR, a #2 WR is bit of a stretch…
If Plex is healthy and motivated (which it sounds like he is) bring him in and as you stated, sign him to a 2 year Deal with incentives and he could be a great #3WR/Red-Zone target for the Eagles..

I see the Patriots,Browns,Jets,Redskins and maybe even the Giants as suitors for Plex

wow, media fishes a line out there, and you all bite. Look, if the Eagles get him and he plays well, GREAT. But we have 0 need at offenseive skill positions, a lot of need on D. And if getting Plax means having a weaker shot at Nnamdi, Johnathan Joseph, Cromartie, any other CB, any other Safety, any other DE, DT, LB, than it’s a dumb move not worth making. Period.

and why do you guys put an ‘e’ in his name? It’s not Plexico

Vick, now plaxico, and ray Lewis says w/ lock out more players to be in prison, good for the eagles, though, the halfway house for NFL prison

I respectfully disagree Mr Schiller….
I think we still need a WR who shows up in big games and Plax fits the bill…
Playoffs against GB Jason Avant was our leading WR with 7 grabs…the other 2 dudes had 2 & 3 grabs..that’s not good enough to me

Im with you jrock757…… I also went to school with Plex… Go big Green!!

@schiller- back in school everyone called him Plex with an “E”. It wasn’t until he went to school that I saw his name was spelled with an “A”. So I don’t know…. I’ve only known him as Plex. lol!!

Guys, we can keep 5 Wrs just like last year ( Chad Hall). We don’t need hall now that we have Dion Lewis. So we have Djax, Maclin, Avant, Cooper, Burress. Insert Burress on some red zone packages. It can only help. He is 33, will come cheap, and will only play for 1-2 years max given his age. I say make the move esp if it is cheap.

Agree 100% with “minimum wage” above..
Plus by adding Plex, you keep him away from the Giants & Redskins

Now, here’s a player that have actually won something….We should have signed plex when he was a free agent but Reid told us Stinkston and Freddie Mitchell were good enough. He killed us before the incarceration…third and long..Plaxico Burress and we could do nothing to stop him. Let’s package Kolb, the navy scrub who reminds us of Reno Mahe, Winston Justice, Brent Celek, and Riley Cooper for some future talent…and sign Haynesworth, Burress, Asmo. and linebacker help. Move McGlynn to guard and slide the 27 year old fireman to tackle, and we’ll be able to ball. Celek was dropping balls as if he greased his hands before games last year and really don’t have top speed …his blocking ability is atrocious.

But back to Plax…he would be a serious addition….and if we get something for Daiper Boy (Kolb)…that will only improve our team with talent that actually produce on the field.

songs, what’s the random Celek hate? The guy is MONEY when an offensive line plays a minimum of decent….he was a machine when Kolb first came aboard (not talking about Kolb, just about how reliable of a ‘saftey net go to’ Celek can be. And he had some really great streaks with Donnie Mac as well. Now he blocks better than before too….

what and more importantly, why, do you want to do differently at the TE position?

Celek is a nice player, an overachiever but the reality is that he’s in the the bottom 1/3 in th NFL at his Position.. He’s slow, presents no match-up problems (opposing Defensense can use a LB on him) He can’t stretch the Defense like the more athletic TE’s can and is a poor to average blocker at best…
The one think you can count on is the Celek is tough and a gamer, he used to have very reliable hands but after last season, even that is not a given
I think the Eagles need to upgrate the TE postion for they lag behind most good teams that have 2 & 3 Good TE’s on their Rosters..