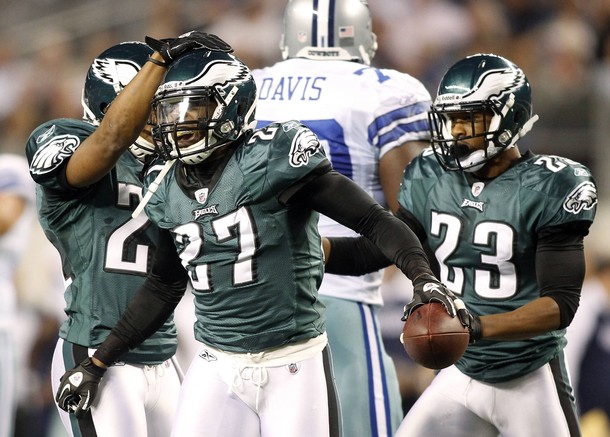 As many of you know, Eagles players have been working out at the PowerTrain gym in New Jersey quite a bit this spring. This is part of the effect of the lock that remains on the doors of the NovaCare Complex, which prevents Eagles players from working out in the facility.

The lockout has reared its head in every aspect of the NFL this off season. Trades have to be put on hold, and draft picks are being shown the door right after meeting their coach.

But as news and coverage of the lock out grows and grows, it is easy to forget the real life effects this lockout is having on players.

On Thursday, G. Cobb and I were at Powertrain, talking to the Eagles working out there. Quintin Mikell, a free agent this summer, painted a real life picture of what the lockout means for players.

Mikell told us that his wife is expecting a baby in October, the first time he has made this revelation to the local media members. Mikell brought this up to illustrate the effects the lock out is having on his life.

“We have a daughter on the way in October. Im in a situation where I don’t know where I’m gonna be. If we do have to move, we have to find new doctors. I’m worried about it. We all have different worries and different problems” said Mikell.

The sincerity and genuine concern in Mikell’s voice is one that can be heard in many players voices around the league right now. Its easy to point to the money Mikell has made over his career and say not to feel sorry for him, and while there is some validity to that, any man with a family can sympathize with Mikell’s situation.

Stories about players going break, borrowing money, or trying to have a baby before the strike last season because of health insurance does not seem as real until you hear a player say it himself.

The immense medical bills David Akers accumulated during his daughters ordeal last season are real, and the pieces of paper that

represent the contract that can’t pay him yet won’t make them go away.

Mikell and Akers are quality NFL players, and they will not doubt have a job when the season does start. But to the countless lower level players that live year to year, real people who’s occupation is football, are facing the same genuine problems that come with any union striking. They could be losing out on the contract they worked their whole life for.

Stories like Mikell’s make you think hard about whether Kevin Kolb really is the one struggling most from this lockout.

Whether you are for the players or owners, it is important to take a step back and realize the lock out is a lot more then a lead story on ESPN.

Beware Of Failed Drug Test When NFL Lock Out Ends

let me break out my violin

Active NFL players only “accumulate” medical bills by choice. NFL players have exclellent health insurance that I am sure covered all of those “accumulated” medical bills. Any uncovered bills were likely due to Akers choice to seek “doctors of the stars” that weren’t covered. The sympathy for the players is so misguided, and the more I hear it the more greedy I believe they are.

Just cause there rich…too some degree..doesnt mean there not real problems.

Pathetic they’ve done this too our beloved league.Its ours…without us it would be null.

you want a real problem? go look at the devastion in joplin missouri

I do feel sorry for a lot of players that are in this situation or similar situations…….. But it is their own fault. They could get a deal done, and a decent one, and they are losing more and more leverage, making it worse for themselves, and they are still dragging this out instead of doing a deal.

How about instead of just Talking to the media like the other players have done this whole time on how much you want a deal done…..You show it by gathering up the players and going to your leader and making an actual counter-offer to the proposal that was given to you…That is how progress actually gets made

It’s getting close to the time for OWners to put up Tryout Notices
I guarantee by August, 85% of the NFL Players would be back in camp trying to make the squad, there definitely would be the big names (super weatlhy) that wouldn’t come to camp play, but who cares. The Game of Football will continue as it’s players will come and go.. It’s time to get this moving forward..
Since there is technically no players Union, there would be very little pressure on the average players not to return.. Every man for himself, you have an average of a 4-5 year career and 35 players on each team don’t make the big bucks to begin with and can;t afford to sit out a year ..
I could see the Eagles Starting Line-up for 2011 Season a little like this
QB – Kafka and Adam DeMichelle
RB – D Lewis, M MArtell, C Hall
FB – S Havili
WR – Cooper,Buress,Avant and SIniorice Moss
TE – HArbor and C Ingram
OL – Dunlap,Howard,Jackson,McGlynn,Watkins,AQ Shipley and Vanwelderd

And Cobra is still available for them too…Nothing to see hear, move along.

Sorry G, I’m all tapped out on the sympathy side. Q knew darn well that this would happen as we all did. They were talking about this at least a year ago if not longer that there could be a lockout or an uncapped year. Long before Q’s wife’s impregnation in January.

You have to realize that when players who make 10x, 20x, 30x or more than what the average fan makes there is no sympathy and that’s just how it is. They should be saving their money for the hot dogs they will have to feed their families after football life is over.

I’ve said it before, take the $9B and instead of splitting it between the owners and players, divide it across all the ticket prices and let the fans feel like they are part of the game.

They had the abilty to bargain. They continue to have that choice. They have instead attempted to seek more leverage by spending 70 zillion dollars litigating the issue.There are what, 1500 players in the NFLPA* (decertified, i know). I’ll feel bad for lots of other people before my sympathies extend very far to the players, or the owners. Families in the armed services, state dept, etc get told “Go here now” and they pack up and roll. Q will be able to do so as well, on a significantly larger pay scale.

I have to agree with the majority here. I have no sympathy here. First, Q made more money in one year than I will make is 10 years. If he can’t afford his medical bills while the lockout is on, that’s on him. Second, as for his perhaps having to move to another city, that’s life in the NFL; again the life he chose. There’s no law mandating his wife move with him. Perhaps she stays here in Philly until the baby is born? Bottom line: the players’ personal problems are just that: personal problems. We all have them. But I don’t have hundreds of thousands (or even millions) of dollars in recent earnings to help me through it. Yeah, I know, money isn’t the answer to life’s problems. But the problems Q is whining about here have been entirely created by the players unwillingness to do a deal with the NFL. They chose to decertify and not even respond to the NFL’s last offer on March 11. March 11! Almost 3 months have gone by and the NFLPA* has yet to even respond to the offer. So if Q and all the other players want my sympathy, show some good faith and NEGOTIATE. But when you stay away from negotiating, don’t come crying about the impact the lockout is having on your personal life.

Boo hoo, no sympathy here for the players or owners. All knew this was coming for two years + and all players salaries are sufficient enough so they all could’ve been well prepared. Does anyone really think that the owners will fold? Of course not, it will be the players and everyone has known well before the strike that it would be the players that will fold because they are not prepared. Boo-hoo.

Have sympathy for those that had few or no choices like Jopin residents, families devastated by illnesses, businesses going south and millions of families losing their homes!

The more articles I read about this strike the less I care about all of it and the more I realize just how much time watching those friggin millionaires play takes out of my life. I got better things to do with my life.

sorry elliot, this has been years in the making. Had you done this little article on a guy who has been scrapping his whole life to get on an NFL team and then because the players wont sit down and talk he is left off all teams- then you might have had a story but….. Q has made money… knew this was going down and still has more choices then the rest of us. Not going to get alot of love here.

Maybe a Colt Anderson or a Chad Hall would have been a better story..