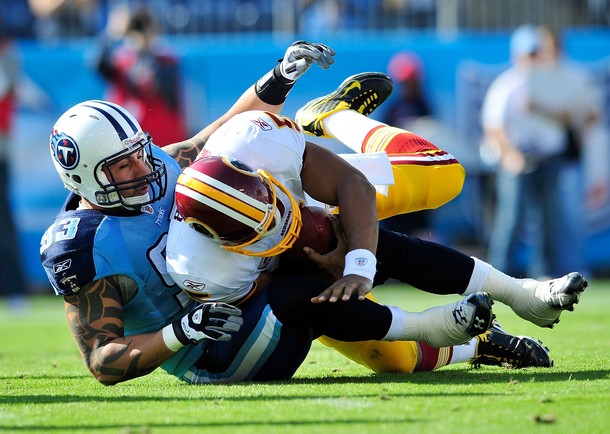 One of the guys the Eagles could target at the defensive end position is current Tennessee Titan and former Bird, Jason Babin, who had the best year of his career a Pro Bowl selection, 13.5 sacks while under the tutelage of Eagles new defensive line coach Jim Washburn.

Right now, Babin is a free agent and because of his veteran status will likely get the chance to decide where he wants to play at in 2011. He has expressed concern about all the changes that are occurring in Nashville. He’s got one big question mark on with regard to the Eagles. He’s 31 years of age.

“I’ve been a little anxious,” Babin told a reporter in Kalamazoo, Michigan . “I would have liked to have had my contract situation squared away March 3. But there’s a picture that involves the NFL as a whole, so I really can’t be selfish when it comes to that. We’ve

got to get some things squared away when it comes to the (collective bargaining agreement).

“More than likely, this is going to drag on, the way things are going, into July and August, the 11th hour, until everyone steps away from their ego a little bit. I’m getting upset about that because it impacts my family.”

Philadelphia would be a great fit for Babin because he and his family already know the area. He knows Andy Reid and the coaches and he would be playing under the leadership of the guy, Washburn, who helped make him a Pro Bowler.

The big question is whether the Birds would give him a four or five-year contract. Chances are they wouldn’t but they could because they know they’ll have the option of releasing him after a few years into the contract.

Eagles GM Howie Roseman has made it clear that the Birds value pass rushers and are unwilling to go to battle without plenty of them.

He’s a one year wonder. I don’t want him back. Some stupid team will overpay him based off of last year. Well spend the money on someone long term, especially with Graham being iffy for the season. Sign Charles Johnson. He’s the perfect age, is big, strong, fast, & is a natural RDE that will be the perfect complement for Cole that we have not & do not have. That’s including Graham. I think Graham is going to be a bust anyway. I’m sick of these smurf Offensive & Defensive linemen that they fall in love with. Change your damn philosophy Reid. Get some big boy studs in there.
DE Charles Johnson.
DT Brandon Mebane.
LOG Justin Blalock.

I would say the only chance that the Eagles go after DE Babin is if he is somehow arrested between today and when the lockout ends.. If he keeps his nose clean, he will end up with the Falcons..

or possibly the NY Jets..

DDcar,wow, you’re the only comment on this article so far… I’d expect more..

Anyway, why do you think babin was a one year wonder. So far, you have no proof of that because the year following that wonder hasn’t started. Just a hunch?

Honestly I dont watch the titans games so I wont know what he did different from when he was here a year ago but you gotta believe that a guy who had 13 sacks is better than anything else we got on this team besides Cole.

vr – exactly. Let’s say we sign Babin and he does 75% as well as he did last year – that’s 10 sacks. Ok, so Babin get’s 10, that bodes much better for Parker, Graham, and Tapp than without Babin. If they can sign him for a reasonable contract, with the Washburn incentive, then I say do it. Period.

I would expect that if this drags on too much longer the relative glut of FA players (remember the FA threshhold went from 4 to 6 yrs last season leaving a slew of players possibly eligible from that class joining the FA class this year) and the shortened FA period before camps will benefit teams like the Eagles looking to sign quality players at reduced years. May cost em a few extra dollars in signing bonus, but this lockout is going to benefit the owners far more than the players…

Ok, my math was off becuase he really got 12.5 sacks last year, not 13.5 (That’s what I get for trusting Garry Cobb for details)…

Still, 9 sacks would be 75% of his production from last year. Sure, he started 16 games, v. the spot work he did here and the rotation he’d probably play in next year here – but still, average his past two seasons and he still gets 7.5 sacks. I’ll take that in a heartbeat from a rotational guy, with Graham coming back later in the season and a solid contribution from Parker/Tapp

And a 75% Jason Babin for 2-3 yrs would look real good in midnight green. And no Nmandi, I’d rather have Ike Taylor or Carlos Rogers on the opposite side…

Knock the charles johnson talk off, they will not invest in another DE for big money when they already have cole and graham under contract.. If theyre going to sign anyone it would be a rotational DE like babin who wont cost as much as a charles johnson but can have just as big of an impact as him…

If they are going “all in” as our fav report said…. there is NO WAY they go into the season with our starting RDE out until mid season on an injury that takes like 1-2 years to recover. PLUS- theere are several guys that rock that will be FA’s. Im telling you people……. This D is going to be VERY different this year. If you think they are done…. you are nutz.

New CB and DE on the way. They have 40 milllion to spend.

Dont worry Victor Abimiari would do the job……… We’ve been waiting 4 years now…… He’ll come around eventually……… I can see it now……. ND players suck……… They are not NFL players…… If they played 8 years in college they still couldnt perform in the big leagues!!!!!! Laws is coming around a little…….. A tad!!!!!

STEVO, thank you! At least someone on here agrees with me, & thinks rationally. JHart, Graham is out until at least the 10th week, & we need a stud starter, at RDE complimentary to Cole. What part don’t you understand. This D-Line is not good, does not get to the QB, & can’t stop the run. They need upgrading immediately, if not sooner. If the words through the grapevine are true, the Birds will have at least $45 Million to spend on free agency. That’s before more roster cuts/ trades. It doesn’t matter who is under contract. JROC, Abiamiri does suck elephants nuts doesn’t he? Thank God he’ll be gone.

DDcar, you could be right they could very well sign a big name big contract guy like charles johnson but i dont see it, i think they MAY swallow there pride and resign a player they had before in Jason Babin who had almost 13 sacks last year under washburn, and someone that wont command big big money. i dont see them investing big big money in DE when they have money tied in with Graham and Cole already, then they signed Philip Hunt who reminds me alot of trent cole. I think under washburn were going to see alot of guys with big years, Cole with double digit sacks and Albert Haynesworth being the cause of alot of the flexibility on defense because of how he commands a double team even a triple team at times…

To JHm
I like what I’ve seen in P Hunt but we’ll find out come Camp/Preseason time,
What I don’t like is that every DE on the Roster is a smallish,low-built, bottom heavy player with short arms.. COle, Graham,Tapp,Hunt and even Parker are on th esmallish side with short arms.. I would like to see a 6-4 285-290 lbs DE get an opportununtiy once in a while.. These 6’0 260 lbs players to me, don’t have a great track record of staying strong as the season winds down and every year we talk about who the smallish players get worn down and pushed around and I really don’t see much differece ewith the group they have now and when you add Teo,Sapp, it’s a small, light group to go up against 310-330 OT’s..Opposing teams TE’s are as big/bigger than some the Eagles DE’s.. get some size and strength for once at the position…

Paul i would love to see a change in philosophy similar to what weve seen with there LB position but theyve drafted so many of those smallish players at DE the past few years that they kind of tied there hands behind there backs, there kinda forced to groom these guys and see what they got. Theyve invested alot of draft picks in them… It stinks because there was a player in FA last year in julius peppers who would have been that guy for us on defense but the birds passed him up, they decided to roll with there current DEs and new draft pick Brandon Graham… They got exposed in the green bay game big time in embarrassing fashion… So again im all for a new philosophy taller,bigger fast DEs im just not positive that they will look to acquire another big money DE, i think they need to get a stud DT before a DE… Haynesworth at DT and Babin at DE… At a bargain price… But i do like B Cofield at DT too…

Julius Peppers did not want to play for the Eagles and the Eagles never really had a shot at him. He stated that he was not interested in playing for a Northeast team like Philly,NE or the NY Jets..

@paulman – if the Eagles offered more money, Peppers would be an Eagle… however, the Bears offered one more year than the Birds… .