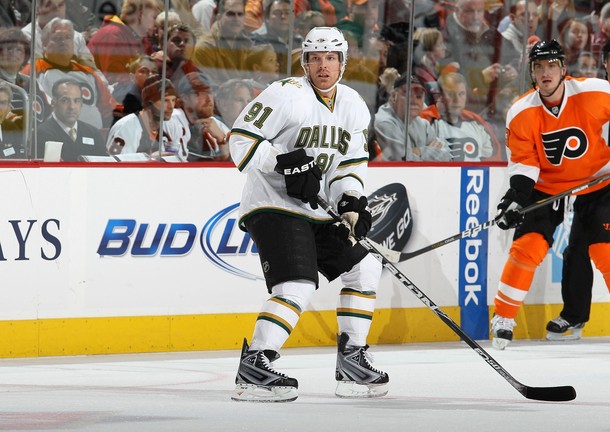 The Flyers have told members of the media that they will not be extending an offer sheet to restricted free agent Steve Stamkos. As has been widely discussed, the price the organization would have to pay to acquire him would limit them from assembling a full team, not to mention the enemy they would create in Tampa Bay Lightning general manager Steve Yzerman.

It would be Eric Lindros hockey all over again, albeit with less drama.

In the end, performing their due diligence is laudable.  One would rather they assess all of the options available rather than make moves with blinders on.  Along those lines, they now appear to be looking into what it would take to sign unrestricted free agent Brad Richards.

Richards, 31, is coming off a 77 point season with the Dallas Stars and is considered to be the top unrestricted free agent forward in this year’s class.  I wouldn’t have believed the Flyers were involved at all if Bruce Garrioch of the Ottawa Sun hadn’t reported that the Flyers are quietly shopping defenseman Andrej Meszaros. Meszaros, 25, is signed for three more years at $4 million per year.

Considering that the Toronto Maple Leafs, Buffalo Sabres and New York Rangers are all expected to be heavily involved in the inevitable bidding war, I don’t expect the Flyers to take the risk. He is this year’s Ilya Kovalchuk and will require an obscene amount of money for his services.

I also believe the Flyers realize the issue they have at defensive depth with their lynch pins, Kimmo Timonen and Chris Pronger, getting older.  Throwing away one of their future replacements just doesn’t make sense, especially with centers Brayden Schenn and Sean Couturier waiting in the wings.

The other risk with overpayment is the possibility that the player doesn’t perform to the contract like fans expect, or suffers from injuries that render him an expensive paperweight.  Just ask Chris Drury, who was bought out by the Rangers after scoring 5 points in 24 games this past season. Drury, 34, would still be considered one of the best 2nd/3rd line players in the league if he could stay healthy.

Personally, if he doesn’t have a contract signed by August, I would love to see the Flyers extend him a tryout offer.  See if he’s healthy enough by the time next season rolls around and sign him to whatever cap space you have left.  Not only would be he be reunited with former teammate Danny Briere, but to have a shot at playing the Rangers in the 2012 Winter Classic?

Who would say no?