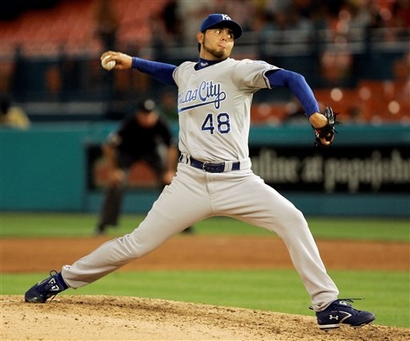 The Phillies are getting ready for the second half of the season, but before they prepare for their postseason run, the team still has a few needs that they would like to address come the trade deadline.

One of those needs resides in the bullpen, specifically the role of closer.

Right now, Antonio Bastardo, who has done a terrific job thus far, is the team’s closer. He will, though, hand over the job to Ryan Madson once he is done his rehab assignment in Clearwater.

Madson has proven he can come in and shut the door, but he has also proven that he can let the game take control of him. He’s had 11 blown saves combined from 2009 to 2010, but he has just one so far this season compared to 15 saves — a career-high.

So for now, Madson looks like a solid option in the ninth inning.

But there’s still a sense of urgency being placed on this Phillies team to make a move for a closer. Heath Bell has had his name linked to the Phillies for some time now. He would be a great addition, but as a rental player (the Phillies would need to re-sign him after this season), he would come at too high of a price.

Another name that has been floating around on the trade market is Kansas City’s Joakim Soria. For those that haven’t heard of him, he had a fantastic season last year (43 saves, 1.78 ERA). This year, though, has been a different story. He has just 15 saves and five blown saves to go along with a career-high 4.03 ERA.

MLB experts are linking the Phillies to pretty much every reliever out on the market, which is why Soria is believed to be of some interest to the club.

But that interest was tossed out the bag recently after Soria released six teams on his no-trade list: the Red Sox, Yankees, Dodgers, Braves, Rockies, and Phillies.

It’s apparent that he doesn’t want to pitch for a big media market. If he can’t handle the pressure of Philly, there’s no way he would be able to pitch in the postseason.

We can cross Soria’s name of the list of possible deadline acquisitions. Now, a few other names are surfacing, such as San Diego’s Luke Gregerson.

Michael Vick On Verge Of Signing Another Endorsement Deal

Already said this earlier today to Paulman, Kyle. Maybe I should be a columnist on here. God forbid. 😉

I had this story written up and ready to go around noon today, but it got delayed in the posting schedule.

Haha alright. So I’ll throw this out there, do you have any targets you think the Phillies should look at, whether it be a right-handed bat or a reliever? Or should they stay put?

Well, I’m the wrong person to ask, because I’ve been ripping Amaro all year for putting this lineup together. So i’m a little biased. I don’t know if they are going to be able to make any trades. But if I my own preference, I want either Pence or Kemp, & send Dom Brown to the minors. IMO, he is overrated & not ready yet. Bring him up next year when Ibanez is gone.

Baseball note: JC Romero signs with the NY Yankees after being released by the Phillies and Nationals.

The Phillies have some options like Ryan Ludwick, Josh Willingham, Jeff Francoeur and Wilson Betemit. Hunter Pence would be the best choice in my opinion but it would be simply retarded in the Astros part to trade him. They can offer players in a package (a pretty good one) offering Vance Worley, Dom Brown and a few pitching prospects.

History tells we will make a deal. Phillies have not stayed put at the deadline since 1999.

Good work Kyle..
It’s kind of unusual that a Pitcher’s puts 6 very good teams on his no-trade list.. What’s with that… I guess he doesn’t want to compete at the highest level..
If the Phils could only make 1 move, I would rather it be another proven Bullpen Pitcher who can close or at least be a Set-up Pitcher..
I am concerned about the Offense though I do think it will come around in the 2nd Half a little better, but more concerned about a thin Bullpen…
I do not think Lidge will Pitch at all this year and if he does, how effective can he be… I think Contreras arm/elbow was blown out for being overworked the 1st few weeks of the Season when Manager Charlie had no confidence in anyone else and now he and the team are paying the price.. Stutes,Bastardo,Madson and 1 more would be needed for a deep playoff run..
Remember with this offense, the Phils will probably play more extra-inning games and having another proven reliever/closer around to close out games would be a good thing…

Here’s a list of some young Relief Pitchers having Outstanding Seasons
that are Pitching for teams who are either out of or will most likely not be in the Playoff Hunt.. I did not list the Stud Relievers of the Washington Nationals
(Clippard or Storen) for being a division rival and not too liklely to trade w/Phils

Oswalt had the Phillies on his no trade list last year too, how’d that go??

You would think that his no trade list would be to teams that have legit closers, but it is made up completely of contenders. What a joke.

Bugsy, I’ll say again what I said last year about Soria, F^@k you Soria. If you do not want to come to a Champion caliber team, that is ready to win it now, go f^@k yourself. If he would rather stay with a black hole organization, & play in constant mediocrity, then you are a coward, & deserve to be a loser. Go f^@k yourself you loser joke of a man.

I was sad to see Contreras go down, because he has an ‘even keel’ type demeanor when he goes to the mound, as opposed to the ‘hyper’ vibe you get from Madson, and formerly Lidge…But, it looks like both of those two will be back soon, and Lidge seems to be doing well in his rehab…But, another good arm if you can get it without breaking the bank?…Sure…Soria?…I never see him pitch, so I can’t comment.

I feel OK with Madson as a closer, I think he has matured.