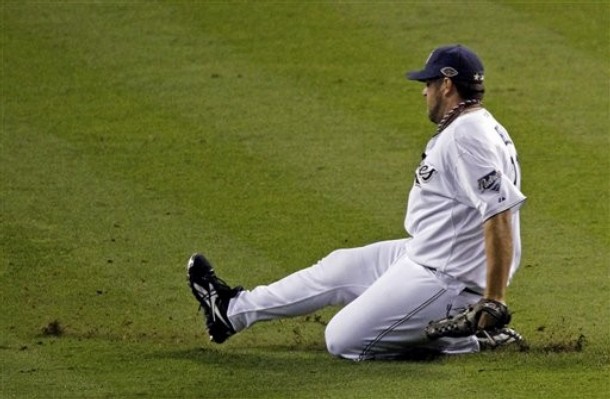 Somewhere underneath the thick July humidity you can feel that frosty bite of October air.

After the San Francisco Giants stole the team’s chances at a third straight appearance in the World Series with a young and talented pitching staff and some bald dude named Cody Ross (Where the hell did he come from?) it became clear what was needed to return to the World Series.

Four Aces. A formidable offense. A solid bullpen. While no one could have predicted the Cliff Lee signing, it represented the Phillies new team philosophy. They are not going to bash the ball to Mars all the way through the fall months but instead rely on outstanding pitching and hope timely hitting will be enough. These were the eggs in the basket; these are the ingredients that would get us back

Oh, how quickly we forget.

The cries for a right-handed bat have been heard loud and clear. Jeff Francoeur and Ryan Ludwick’s names have been floating around for weeks as the Phillies offense has ‘struggled’ through the first half.

I will acknowledge that this offense is not as good as it used to be. That is completely understandable. But when this team was leading the league in runs the only ace was Cole Hamels and Adam Eaton (I still shudder when I type that name) was pitching third in the rotation. Behind Halladay, Hamels, Lee and (hopefully) Oswalt the Phillies don’t need the most runs in the league. They just need enough to get those guys a lead.

The offense sits in the middle of nearly every National League offensive category. Some call it mediocrity. I call it sufficient.

Sure a right-handed bat would be a nice addition but will the players available be worth the price? Teams on the brink of contending will surely throw whatever is in their farm systems at the Padres or Mets for whatever hitter is available because, frankly, they need it more than we do. Not to mention the Phillies are right up against the luxury tax and adding another large salary would put them over the limit, something David Montgomery’s wallet would surely disagree with.

Not to mention these hitters are never a guarantee. If so many people like to hate on Ryan Howard, who always is at the top of the league in home runs and RBI’s despite his batting average, how do you think they will react to Jeff Francoeur striking out three times a game?

If the Phillies are going to do anything big before July 31st it should be to go get another arm for the bullpen. The youngsters, Antonio Bastardo, Michael Stutes and David Herndon, have all been outstanding this year. Their contributions have been absolutely instrumental in the Phillies leading the league in wins through the All-Star break. But I question how their arms will hold up heading into September and October. Bastardo has already nearly doubled his innings total from last year and the same goes for Stutes. While I am confident in Ryan Madson’s ability to return healthy, the rest of the bullpen remains bleak. Jose Contreras has an old arm that is injured often and no one is ever sure what will happen with Brad Lidge these days.

The answer? Go get Heath Bell. Maybe that slide into the pitchers mound—never thought I would say that—won me over, but if there is a position and a player that is worth the price at the deadline it is Bell. Let’s say Madson comes back and Lidge returns to some-what consistent form around mid August. Throwing Bell in the equation helps save the youngster’s arms and you have a bullpen nearly as intimidating as the starters who take the mound before them. Also if Madson and Lidge struggle, Bell can certainly come in and fill the closers role with ease.

It may cost the team salary and players but adding Bell carries less or a risk then an expensive bat. Besides, the Phillies may be able to add a bat late August or early September in a waiver wire deal a la Matt Stairs or Mike Sweeney at a much more reasonable price.

So step back from the cliff, Phillies fans. You sit at the top of the Major League standings and have the best staff in the league even though one of those aces is injured.

Breathe in that summer air while it last, fall is but a few months away.