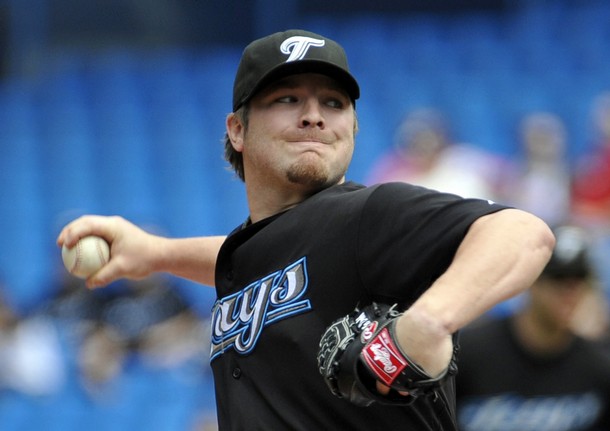 Right now, the Phillies have to be celebrating their decision to part ways with pitcher Kyle Drabek, who was once labeled as an “untouchable” prospect and the future ace of the team.

Maybe all the self-proclaimed hype they built up around Drabek paid off. His “potential” — a term that is near impossible to access — convinced the Blue Jays to ship away their face of the franchise in Roy Halladay.

Since the move, Halladay has won a Cy Young, thrown a no-hitter in the postseason, and a perfect game, as well. Drabek, on the other hand, is floundering around the Blue Jays’ farm system after being demoted this season.

In the first month of the season, Drabek was 2-1 with Toronto and looked like a decent pitcher. But then came May and June, and with it, came his statistical implosion. He went 2-4 in the two months, finished with a 15.30 ERA in June and 47 hits in 40.1 innings in the two months.

Those dreadful numbers, specifically his last outing in which he allowed eight run to the Red Sox, led to his demotion.

Since his demotion to AAA Las Vegas, the former top pitching prospect has accounted for a horrendous 8.24 ERA in five starts, as well as a 16/12 strikeout-to-walk ratio, according to Rotoworld.com.

To add to his current landslide season, Drabek left his last outing with soreness in his trap muscle. However, he was already having a terrible start to the game; he surrendered six runs on six hits in just three innings.

It’s sad to see him struggling this bad, and I really would have liked to have seen him succeed up in Toronto, because honestly, the Blue Jays don’t have much to look forward to besides Jose Bautista making a run for 60 home runs.

But you have to congratulate the Phillies organization for this move. I know now in hindsight this deal is a no-brainer, but back then, the Phillies tried all they could to retain Drabek at the deadline because they were so high on him. Whether it was all a ploy or not, the Phillies definitely came out as the winners of that deal.

He’s was over rated by the organization, like every other prospect we have. That’s what Amaro does best. That’s why I don’t believe anything he says. Prospects are unproven, none of them should ever be labeled untouchable. That’s why trades for proven players should be made, ASAP.

Its very crafty for them to “over rate” prospects so they can get maximum value for them. Its no different from a used car salesman selling used cars. Don’t get it twisted, we have been on the bad end of the “prospects & potential” trades for years now and it feels good to not be shafted because the prospects we got in return were garbage. Remember Freddy Garcia, Curt Schilling, Bobby Abreu and the Cliff Lee deal??? Man DD you really don’t like Amaro.

RR, your right I can’t stand Amaro, for the many reasons i’ve stated many times in the past. JAKE, that was all of Ed Wade & Mike Arbuckles guys. They built this teams nucleus, not Amaro or even Gillick. Gillick put them over the top with Victorino & Werth. Wade was not a very good GM, but he was given nothing to work with. He took over a black hole & the owners spent zero $$$ for decades, until they knew they had a new park wrapped up. You can put a
f^@king crash test dummy as the Phils GM, & the same job could get done, with the $$$ & payroll flexibility Amaro has been given. He still managed to put together a s#!t offensive lineup. How do you have this much garbage in your lineup with $170M+ payroll? Since Amaro has taken over, the lineup has worsened, contracts are overpaid & untradable, we’re the oldest lineup in MLB. Don’t give me Halladay & Lee. See the crash test dummy comment for that answer. I worked for the Phillies for a very long time, so my friends, I know what i’m talking about, believe me.

Amaro, is a silver spoon fed, wannabe golden boy, who has been given everything on a silver platter, because of Montgomery’s loyalty to his family. Where in the hell in any other organization, have you seen an asst. GM stay with a team through 2 different GM’s. Wade couldn’t get fired & Gillick couldn’t retire fast enough. He inherited a World Series Championship team, that was ready made to win. Since he took over he has made nothing but piss poor decisions, & pissed away way too much $$$ on this team, that could be used for us now. But they are up against the luxury tax & can’t do s#!t of significance, to put our offense over the top. If I was the owners, i’d tell Amaro, “We gave you $170M+ to put together this team, & this once in a lifetime rotation, you will not go over the luxury tax, make trades with what you have & if you don’t at least get to the WS, your f^@king fired!” End of f^@king story! I’m sick of Amaro & his apologists. Makes me physically i’ll.

I heard Rueben is going to run for Mayor for Philadelphia after they Win the World Series this year….

#1) Extending R Howards Deal when it was not neccessary
#2) Extending J Blanton Deal to a crazy number for an average performer and now are stuck with him
#3) Signing older players past their primes for 3 Year Deals at All-Star type of $$$.. Ibanez and Polanco are good solid players, but not All-Stars in my book
#4) Letting 1st Base Coach Davey Lopes walk and leave over $50,000
#5) Not solidifying the Bench and OF this past off-season thinking that D Brown,Francisco and GLoad would be good enough

Take away Stutes and Bastardo’s unexpected performance this Season and this Bullpen would be in serious trouble..