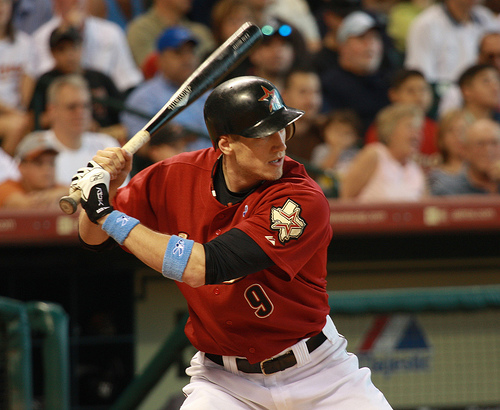 The Phillies will be shooting for the stars come the July 31 trade deadline; Houston Astros all-star right fielder Hunter Pence to be specific. A report by CSN Philly’s Jim Salisbury on Friday stated that Pence would be the Phillies main target.

If the Phils were able to acquire Pence it would be nearly impossible to find a flaw with this ball club. However the All-Star outfielder will come with a hefty price tag. Pence is the Astros’ best and most marketable player, so you had better believe it will not be easy to pry him away. Houston would probably demand some combination of Domonic Brown and Vance Worley, and possibly Jonathan Singleton, a minor league first baseman and outstanding hitting prospect.

At first glimpse, the price might seem too much but if the Fightins get Pence that would significantly reduce the Brown’s role. As far as I’m concerned, getting Pence would eliminate the need for Brown, so I believe it makes sense for the Phillies to give up Brown in the deal.

In the case of Worley, if Roy Oswalt comes back healthy this year (yes, that is a BIG if), Worley would be the club’s number five-starter and probably not even make the playoff roster. And as far as Singleton, why not trade prospects for proven talent. Anybody begging for Kyle Drabek’s return?

Pence would be a crucial acquisition, and more valuable to the Phillies than any other names rumored to be out there such as Melky Cabrera of the Kansas City Royals and Carlos Beltran of the New York Mets. Pence is a better player and he is younger.

The rightfielder would be the much needed right handed bat which the Phils have needed all season long. The Phils could put him in the fifth spot in the lineup and force teams to start throwing fastballs to Ryan Howard. Pence would give the Phillies more punch in their lineup with his .310 average and 62 RBI’s.

Also Pence would be under contract until after the 2013 season so he would not just be a one-year rental player like Beltran. At 28- years old Pence has established himself as one of the premier outfielders in the National League. Picking up Pence could be a deal that has the perfect combination to win now and build for the future.

The biggest problem with getting Pence will be staying under $178 million luxury-tax limit. The Phillies are currently only $3 million

under the limit and Pence is due about $3.45 million by the end of the season, although depending on the terms of the deal the Astros might have to pick that up. Ruben Amaro Jr. has shown in the past that he does not necessarily mind spending over the limit in order to get the player he wants as he did with Cliff Lee in 2009.

Signing Pence will also make it financially more difficult to re-sign Cole Hamels and Jimmy Rollins who both have contracts that expire at the end of the season. Still the Phils will deal with that when the time comes and it should not deter them from going after Pence.

The Phillies have held on to the best record in baseball for basically the entire season. however come playoff time this pitching staff will need some run support to get to the ultimate prize. Adding a player of Pence’s skill to our outfield and our offensive line-up it would help insure that the bats won’t fade in the playoff as they did last year.

While the idea of Pence in a Phils uniform is an exciting image, it will be very difficult to get the deal done. Right now, it seems that the deal is more likely not to get done, but the Phillies and Astros have completed blockbuster trades in the past and we’ll see if Amaro still has the magic in his bag of trade deadline tricks.