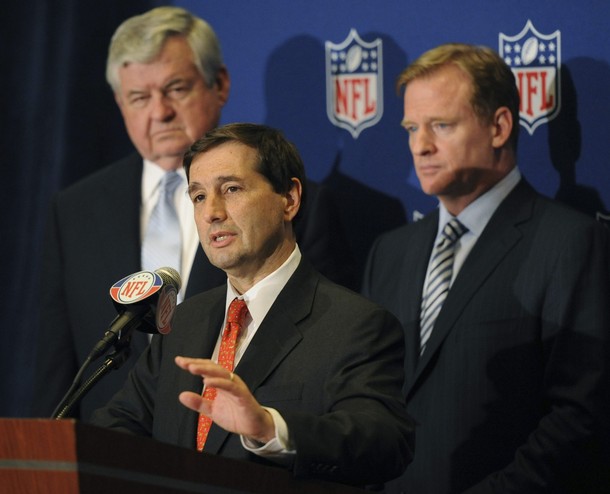 The National Football League Players Association now have the ball. They could end the NFL lockout or prolong it.

The owners have okayed a ten-year CBA proposal and thrown it into the players laps. There’s tremendous pressure on the players to accept the proposal because NFL fans are tired of the lockout and tired of talking about it. NFLPA Executive Director DeMaurice Smith could continue to battle for more in the deal, but it would probably be a mistake because he would risking a mutiny by the players.

On July 21, 2011, the issue wasn’t so much that the National Football League owners voted to accept a new CBA, the key was the ten-year length of it and some of the terms in it hadn’t be agreed upon by the players. The player representatives for each team have received a copy of the proposed agreement and now they must decide whether to recommend to the league’s players that they ratify or reject this proposal from the owners.

Publicly, the owners said they expected a player vote on Friday, July 22, but that vote didn’t occur. Despite that fact, the owners told reporters that they expected facilities to open on Saturday, July 23, which would have been impossible since the players haven’t voted on the proposal.

The owners have given the players a deadline of Wednesday July 27th to vote on their CBA proposal and then take the proper steps to re-certify as a union. But so far, the players have been hesitant to sign and ratify the new proposed CBA because once they agree upon it, they’ll be locked into that agreement for the next ten years.

The owners are using their knowledge of the players’ eagerness to get back to football in their favor. They figure that if the players really want to get back to their jobs then they will sign the new proposed CBA, re-certify as a union, so they can get back to work in time to have no preseason games cancelled.

The players also have the uncertainty of dealing with free agency, and possibly learning a new offensive or defensive system if they get signed by another team in free agency. The league’s owners also know that the players don’t want to have any regular season games lost because it would cost them one-sixteenth of their 2011 salaries.

NFL players have been working out informally with their teammates and opponents but that is mostly just passing the ball or doing drills on their own without opposing players contending against them. These aren’t on the level of regular team practices because players don’t work as hard without their coaches directing them and pushing them to maximum effort.

The league has already cancelled the Hall of Fame game, which is one of the biggest monetary preseason games, so that money is now lost to both the players and the owners. There is an urgency to get a new CBA ratified because both groups don’t want to lose nearly $200 million for each week one of the preseason, which is cancelled.

The NFLPA executive board is due to recommend that the players accept the terms of the new CBA today, Monday, July 25th, and then if the players do take that advise and ratify the agreement, NFL team facilities would open up within the next couple of days.

A couple of days after the deal is agreed upon, teams will be active in signing their own free agents, then their rookie draft picks and then shortly thereafter teams can begin signing other team’s free agents and then camp would begin.

If you are a NFL Fantasy GM, then you’re going to lose your mind enjoying the feverish action which will begin at the end of the week or the beginning of next week. Teams will be forced to put together roster in two weeks rather than the usual five months. Fasten your seat belts.