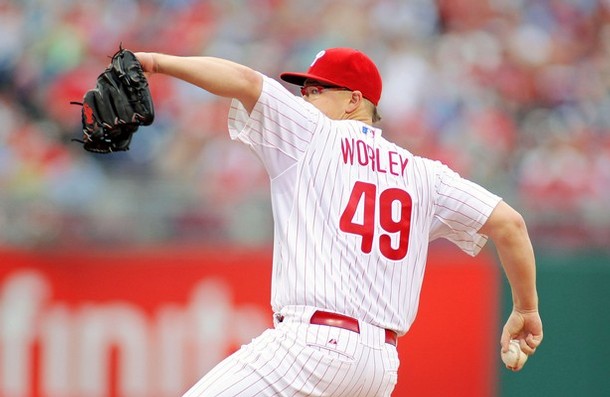 There’s a lot of talk lately that the Phillies could ship off their 7-1 rookie pitcher Vance Worley in order to acquire the highly-regarded right-handed bat they have been searching for.

Worley’s been nothing less than spectacular so far. With nothing “special” about him, Worley has managed to baffle opposing batters. He doesn’t throw a high 90’s fastball. He doesn’t have a 12-6 curveball. And he doesn’t have some funky windup like Dontrelle Willis or Tim Lincecum.
He uses his control and his back-door fastball, which is becoming his go-to out pitch, to fool the hitters and keep them in the ballpark.

His numbers are unbelievable. To go along with his aforementioned 7-1 record, Worley has amassed a 2.02 ERA, a 1.09 WHIP and has surrendered just 48 hits in 62.1 innings of work. He doesn’t strike people out like the other Phillies’ pitchers (53 K’s), but he forces ground outs and pop outs at a good rate; opponents are hitting a measly .212 against him.

Despite his terrific numbers, I do begin to wonder when the big league hitters will figure him out. As I said earlier, he’s not overpowering and he’s not pitching with a goofy windup. He’s just pitching effectively.

At some point, big league hitters will figure him out and that effectiveness of his will begin to wear out. Continuing to develop his fastball and back-door pitches will be the key factors in whether or not he is able to pitch this effectively for multiple years.

With that said, there’s a part of me that compares him to another rookie sensation in Philadelphia: J.A. Happ.

The Northwestern alum was plain filthy in 2009, going 12-4 with a 2.93 ERA and 119 strikeouts. Those numbers could be nearly identical to Worley once the season concludes.

Now Happ was a great pitcher, but now, he’s sort of cooled off. Maybe it’s the fact that he plays for the worst team in baseball down in Houston. Whatever it may be, Happ has failed to pitch up to his 2009 numbers. Currently, the former Phillie is 4-12 — a complete reversal of his 2009 numbers — and has an ERA doubled from 2009 (6.12).

To avoid having anything funny “happ-ening” with Worley, should the Phillies trade him now? Don’t forget, his stock may never be this high again.

It’s some food for thought. With so much hype surrounding the Phillies this trade deadline, and with the need for a right-handed bat being featured on every website across the Philadelphia area, there’s the possibility that the Phillies use Worley as the centerpiece in a trade for someone like Hunter Pence.

Hey, wouldn’t that be ironic: Worley and Happ pitching on the same staff?

Around The NFL: The Tuesday Night Edition

Day One Of NFL Business In Philly

1. He has to avoid the injuries Happ had–I noticed that you failed to mention those in your write-up.

I would stay with Worley and not part with him..
He’s young, inexpensive and can be the Phils 4th Starter behind the Big 3 for the next couple of Seasons on the cheap, while they pay up for Hamels..
Oswalt/Blanton will not be back in 2012 so having a good 4th Pitcher has the Phils Starting Rotatin Set for the next few seasons…
Package D Brown, and some pitching Prospects (and even Kendrick) but do not let Worley get away would be my move..

Oh the fascination with a right handed bat… I’m assuming you’d like him to bat 5th, yes? What if I said we could get Jose Bautista without giving up any prospects? I’m sure everyone would jump at that right? Bautista is pretty much the ideal guy to have against left handed pitching this year. His line against left handed pitching is as follows: Jose Bautista   89 PA   .366/.494/.746 1.240 OPS 7 HR 15 RBI 18 BB 14K. We’d all be more than thrilled to have that guy batting 5th, correct? Let’s, just for fun, see of there’s anyone else available that we could get. How about a guy with the following line: .375/.487/.719  for a 1.206 OPS with 5HR and 16 RBI 11 BB and only 6K’s in 79 PA? We’d take that right? What’s that? We already have this guy? Why, yes, those are Shane Victorino’s numbers batting right handed. The playoffs are such a crap shoot. It’s simply not worth giving up good prospects to try to replicate production we currently have. Adding a right handed bat barely increases our odds of winning the WS this year, but the loss of 2 or 3 prospects could significantly decrease our chances in the coming years. That’s just not a smart way to run a franchise.

As far as trading Worley now because he’ll fall apart due to his lack of power pitching attributes, I simply laugh. I mean the only reason Greg Maddux and Tom Glavine enjoyed years of success was because of their overpowering stuff, right? I mean Cliff Lee throws in the mid to high 90s as well correct. I it’s simply impossible to have success at the major league level unless you’re lighting up the radar gun! Now, do I believe Worley is the next coming of Greg Maddux and our staff’s best pitcher (as his current numbers suggest)? Of course not. But you know what he is? A solid ML starter that’s cost controlled. Even when he regresses to a 3 or 3.25 ERA pitcher he will be vital with the pending departure of Oswalf and his salary will be important with the likely extension coming for Hamels. His value isn’t based in his current record or ERA but actually in the production he can give you for his cost.

You know what this team needs? To get everyone healthy… The phillies have to best offense in the NL since Chase Utley’s return. Everyone just slowly back away from the “trade anyone we have to to get Hunter Pence” ledge.

And for those of you who are ready to ship Brown out for Pence… Why in god’s name would you do that? Here’s your trade off. You get a guy that’s 5 years older and who will make around $20m over the next two years who’s having a career year (mostly due to an unsustainable BAPIP) and loose a 23 year old kid who’s got two more pre-arbitration years making $450k per year with three arbitration years after that. Pence isn’t even a top 10 outfielder while Brown could develop into a top 10 overall player in the entire league. It just doesn’t make sense. Oh, and currently, Pence’s OPS is only 60 points higher than Brown’s. Is that small differential worth an almost $20m difference in salary over the next two years? This team must get younger and find production from young players. Sacrificing thr younger, cheaper Brown for Pencec and his reletively negligable current production differential is pure insanity.

Very true Bobby. As for the win-loss record, it’s definitley not a good measure of how he’s doing; but his ERA is certainly a good indicator: above a 6 is not good.

As for the injuries, that’s a great point.

I love everything about Worley especially his attitude. He could be a great 4th SP on this team going forward and I would be happy. But if it takes him to get Pence, then do it. If you want to win this year, then you have to make that move. He and Oswalt will not be starting in the playoffs anyways.

D Brown and John Mayberry will be fine. Both are still pretty green to the pro-game and offer considerably more upside than Pence Hunter alone I even think D Brown offers more upside than Pence Hunter straight up. Micheal Martinez is also starting to show why the team kept him. By playoff time, all of these young guys will be humming, but you have to give them a chance.

If anything I can see them giving up a prospect for Beltran and that’s it if they even make that move.

Are you guys nuts. Why get Pence!? Career year!? Mayberry & Brown have a considerable upside than Pence!? Considerable upside!?!? Really!?!? Really!?!?
First of all, you get Pence now, because he is better than both combined, & then he gives you the best chance to win now & the next few years. He is not having a career year. He is as consistently good as they come. He averages

He averages 280- 300 Av. 25 HR, 90+ RBI’s, 20 steals & is a phenomenal OF. Brown has no shot at coming close to that. Mayberry is a 27 year old (same as Pence), minor league journeyman. He is just OK. Considerable upside!?!? Stop it! Have any of you ever seen Pence, or are you just judging with your hearts?
Plain & simple, Brown is an overrated stiff, Mayberry is just OK, & Pence is a very good, proven, All Star everyday player, & a dire need for the Phils. BTW, his name is Hunter Pence, not Pence Hunter. Also Beltran just was traded to SF.

I have no problem trading worley, brown or any other prospects we have for Pence. But the comparison between Happ and Worley is a little off. Happ has had injuries and was 27 when he was traded. Worley is only 23 and still have a chance to develop his pitches. Happ also played in front of a much better defense, where Worley has to deal with that stiff of an OF in Brown.

Speaking of Brown, someone tell him to either A) let the ball bounce and throw it to the cutoff or B) go all out and dive/catch the ball. I am tired of him diving for the sake of diving but miss the ball. I thought he was 5 tool? one of those tools should be fielding, I don’t see it. YET.