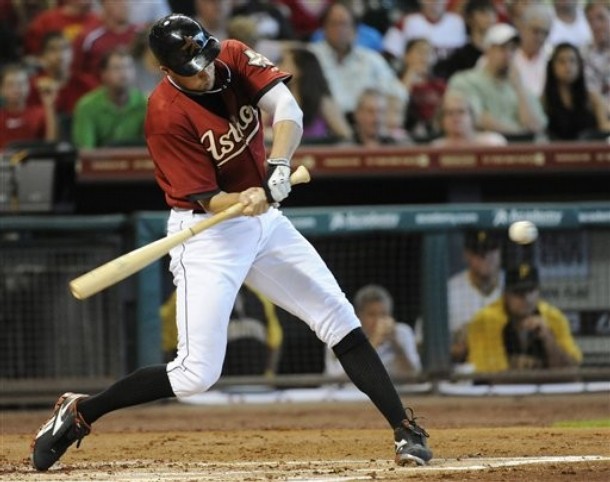 Not to be outdone on a week where the Philadelphia Eagles acquired three Pro-Bowl caliber players, the Phillies have made their move to prime themselves for another World Series run.

For the third straight season, Phillies general manager Ruben Amaro Jr. has made a major acquisition at the trade deadline, completing a deal with Ed Wade and the Houston Astros to bring outfielder Hunter Pence to Philadelphia. The Phillies will send minor leaguers Jarred Cosart, Jonathan Singleton, Josh Reid, and a player to be named later to Houston to acquire Pence.

Amaro was able to complete a major deal without giving up the young players that the Phillies wanted to keep the most. Outfielder Domonic Brown and pitcher Vance Worley did not have to be included in the deal for Pence.

Similar to the Roy Oswalt deal last season, Amaro was also able to get the Astros to send an unspecified amount of cash to help pay for Pence’s contract in order to prevent the Phillies from going over the luxury tax.

Pence gives the Phillies the right-handed presence in the five-hole that they have lacked throughout the season. They’ve tried to use Ben Francisco, Placido Polanco, Shane Victorino, Raul Ibanez, and Domonic Brown in the role to protect Ryan Howard, but none of them have had strong success in the role.

The presence of Pence should make things easier on Howard. The slugger has gone the entire season without a legitimate five-hole hitter behind him. It will make it harder for opposing pitchers to simply pitch around Howard.

Pence will remain property of the Phillies for at least two more seasons, he isn’t scheduled to become a free-agent until 2013.

Awesome to be a phillies fan

DD- not bad for a crash test dummy!

great couple of days to be a philadelphia sports fan. Damn, this is going to be a VERY EXCITING FALL!

Give credit where credit is due, Philly GM’s are killin’ it right now.

We have Pence, Woorley, Brown and stay below the luxury tax. I could have seen trading Brown in the Pense deal. That is more impressive than getting Nnamdi.

The boo birds who make philly look bad are awfully quiet on this site right now! i love it!

I salute Astros GM Ed Wade, as the Gift that keeps on Giving
Astrros even Paid Phils $1 Million Cash to help pay for the Luxury Tax..

You would have to think that Ben Francisco gets released.. Mayberry Jr has been to Valuable and has a lot of big,timely hits recently to send anywhere…

My prayers have been answered. Where are all the Cowboy fans?

I want to officially eat crow, like I said I would. Amaro I officially apologise. You are the man! Ed Wade your getting fired hahaha!!!
They got Pence without trading Worley or Brown. UN FREAKING BELIEVABLE!!! What a day to be a Philly sports fan.
HAVEACIGAR, I’m the crash test dummy now. LOL! I was so excited over Asomugha to start, then this happened. I did an extra 2 shots of Grey Goose… O.O

Holy flock. I guess I had better run over to Rube’s house and tear down all the toilet paper I draped on his trees. Stellar effort, well done Mr. Amaro, sir.

Ed Wade is a secret spy for the phillies.. He gets talented players in houston just to give them to us.

Will Pence join us in tonights game?

Ed Wade is still on the Phillies payroll…. haha… one of the worst GM’s in baseball keeps getting worse…. Cosart is a #3 SP at best and Singleton will be a solid pro, nothing special…. great move by Amaro.

@vricchini – Pence will be in the lineup tonight with Brown going to AAA to work on his hitting.

“They’ve tried to use Ben Francisco, Placido Polanco, Shane Victorino, Raul Ibanez, and Domonic Brown in the role to protect Ryan Howard, but none of them have had strong success in the role.”

Do you actually look at statistics to back up your claims or do you simply jot down whatever randomness comes to mind?

Yup, obviously don’t have anyone that can hit left handed pitching on this team. Idiots.

Brown wasnt very happy but who else you gonna blame? your defense was horrible and your timing sucked! your deserve to be in the situation where you are in fact your lucky we didnt trade you to the stinking astros. Phillies score huge in the trade because we keep worley.. What were they thinking in not demanding worley in this trade?

Wade has been raped so many times by Amaro, that he filed for a restraining order against him today. If he doesn’t get fired, I will be shocked! The Astros need to check for offshore accounts with deposited $$$ from the PHILS. BWAHAHAHA!!!
BTW, Pence will be in the lineup 2night, batting 5th- Via WIP.
I LOVE IT! GO PHILS!

Everyone is going to love this kid. Although he isn’t a superstar, he is a very good, very consistent ball player. He is a hybrid of Utley & Werth. I still can’t believe they got him, without including Worley & Brown. Unfreakingbelievable!!!

Deranged minds think alike DDcar
You and I were calling for Phils to Pursue Pence 2 months ago before he was on most peoples radar..He’s a perfect compliemnt player to this team and is probably a better all-around player than Werth ever was who would go in la-la land once in a while.. He’s averages about 25 HR and 85-90 RBi on a very light hitting team in the Astors with not a lot of suport surrounding him recently.. He’s a very good fielder, an old-school player who is fundamentally sound ..almost an over-achiever if you will and will be an instant hit with the Phils fans and media for his hustle and genuine country boy personality. . (I just hope he doesn’t press and try to do too much out of the gate, just play his game which is to make contact, run and field and fit in with the team which I think he will hav eno problem adjusting to..) This may go down as one of steals in recent memory as far as trades go and Reuben Amaro should be arrested for Grand Larceny by the Houston Sherriff’s Dept..

PAUL, exactly. Everyone ripped us saying we are nuts, Brown is great, blah blah blah. To all the Brown lovers, “Do you get it now, he sucks!”
The Phils are sending him down 2day. Yeah, he’s awesome.
Good bye, thanks for nothing but the laughs, & ulcer.

I have a little different take DDCar
I don’t think Brown sucks at all, He is improving and will be a good everyday player. His at-bats have improved a lot over the last month.. His defensive positioning,reaction to balls, need a lot of work and that will just come with experience..I did state that I didn’t think he was ready to be an everyday MLB to start this season and would have started him at Triple AAA (especially after his initial injury at the beginning of Spring Training in which he basically lost most of his training,learning time ) I though it would be better for him to play everyday, get 400 At-Bats under him and learn the sharpen his defensive skills down at Triple AAA and be a late summer call-up and maybe contribute for a stretch drive and then be ready to take a everyday spot in the 2012 Season
But now with 2 months left, I think he stays up with the big club and the Phils release B Francisco though the cheaper move is send Brown back down.. Have Pence play RF versus LHP and also play in LF so to give Brown a couple of games a week to play in… Pence can play all the OF spots and could spell Ibanez and Victorino a game here or there a week to allow Brown to continue to play and learn..
I believe Pence came up as a 3B in the minors and could maybe even play in a pinch, a little 3B once in a while to add more flexibility to the line-up based on whose their opponents are and whose pitching against them..

I hope your right about Brown, PAUL, because we are going to need another OF next year. I would platoon him & Mayberry next year.