Young Chose Philadelphia Because Of Vick And Reid 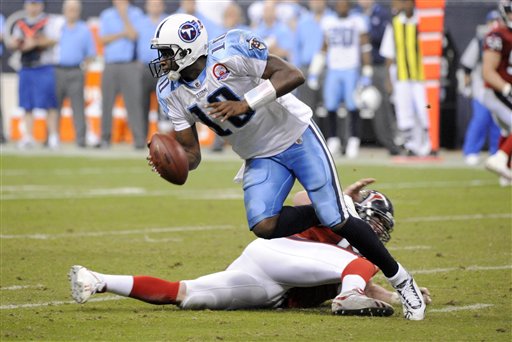 An athletic quarterback with a strong arm and a rocky past signed during training camp? Sounds familiar doesn’t it?

When the Eagles officially announced the signing of former Pro Bowl QB Vince Young to a one-year contract it was hard not to think of Michael Vick.

Don’t get me wrong, Young was never as talented or as successful as Vick was in Atlanta but there are striking similarities and the signing could pan out with the same type of success. Young is very aware that the impact of Vick’s tutelage could have on his career and made that very clear at his first meeting with the media on Saturday.

“Just to get here and learn from [Vick], know a lot of things that he’s been through along with the same things that I’ve been through,” Young said. “It’s good just to be around a person who’s fought through it and had the success that he has right now.”

There also lies the problem. Like Vick, Young carries his own share of baggage. After an impressive rookie season and a stellar collegiate career Young has fallen precipitously since 2007. He had gone 30-17 as a starter for the Titans but after several off the field issues–including throwing his pads at booing fans— they decided to let him go.

These issues have been well documented throughout Young’s career. It’s the reason that most teams passed on the mobile QB. No one wants a distraction in the locker room or someone causing a scene on their football team, especially the Eagles and their fans. (I can just imagineYoung throwing his pads at booing birds fans while walking towards the tunnel. I don’t think he’d make it home in one piece)

With that said, speaking with the media for the first time on Saturday, Young made sure to say all the right things.. He knows his mistakes and chose the Eagles for his chance at redemption

And who better to guide that path than Andy Reid and Marty Mornhinweg?

From Jeff Garcia to A.J. Feeley—even Koy Detmer for that matter—Reid has had an undeniable ability to squeeze every last drop of talent from his man under center. If there’s a talented guy out there with some question marks the Eagles have shown in the past they will take a flier on them. Vince Young is no exception.

“I feel like being in contact with Marty [Mornhinweg] the offensive coordinator as well as the guys like Andy Reid that is very smart and knows quarterbacks, I really feel that they’re going to do a good job expanding my career a little bit more and getting a little more knowledge and bringing my game to where I want it to be at,” Young said.

With Young and Vick the Eagles now have the most athletic QB tandem in the league. Maybe even NFL history. Young can sit comfortably on the bench watching Vick and if he is needed then he will have had the time to adjust to the offense. That’s if he is even needed due to a Vick injury.

“Whatever they ask me to do, to be scout team quarterback or quarterback learning, do whatever it is. I just want to be here to help and be a part of a team. I’m just happy to be a part of the Philadelphia Eagles,” Young said.

With no legitimate backup for Michael Vick the Eagles needed a guy who could come in and win games. After the flurry of big names flocking to town they are clearly Super Bowl or bust this year. With Vick as his mentor and Quarterback-friendly Andy Reid guiding him, Young has the chance to regain his 2007 form and become a legitimate NFL quarterback. Talent was never the question. It was his motivation and off the field antics. If he can fix these problems the sky is the limit.

A Detailed Analysis Of Phillies Pitchers