The Eagles Should Hang Onto Their Three Pro Bowl Cornerbacks 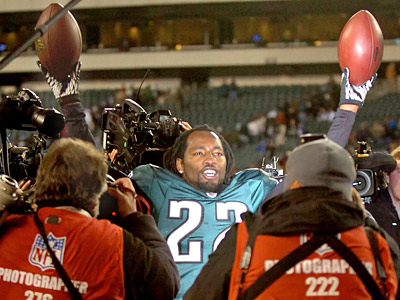 I know we could use a right tackle and our linebacking is suspect with all the youngsters in there, but I think the Eagles should hang onto all three of their Pro Bowl cornerbacks. The NFL is a passing league. The team that wins the Super Bowl must have a superior passing game and an ability to stop the pass.

Let’s take a quick look at the team which won it all last year, the Green Bay Packers. On both sides of the ball, the Packers were superior to the rest of the league in their ability to pass the football, and their ability to stop other teams from passing the football. If the Eagles want to win a Super Bowl, they must be able to compete with the Packers in the passing game.

Rodgers is a great athlete, who throws the football with accuracy, power and precision like few signal callers ever have. I could sit their and watch him throw the football because his release is like a work of art. He made a key throw to Greg Jennings last year on a skinny post on third down in the Super Bowl, that was an impossible throw. There’s no way he should have been able to get that ball in there but he did. I don’t think we’ve seen his best just yet.

From a receivers stand point, the Packers are stocked with talent. They have Jennings, Donald Driver, James Jones, Jordy Nelson, and they’ve added rookie Randall Cobb,

Jennings is the best of the crew with a great combination of size, speed and playmaking ability. He’s the big play guy, who can get deep or make the great run after catching the football. He and Rodgers have a great connection and feel for one another.

Driver is the oldest of the group and mentor. He knows all the tricks of the trade but he doesn’t have the burst he had in the past, He’s a technician and tremendous route runner with great hands.

Nelson is the biggest of the group, standing 6’3″ and weighing 217 pounds. He’s a very good route runner with deceptive speed and good hands. He seems to be coming into his own after a big Super Bowl performance.

Jones is another tremendously talented member of the group, who has good size, speed and playmaking ability, but he drops too many passes.

Cobb is a rookie burner and playmaker with tremendous punt return ability. He’s a tough matchup in the slot, a poor man’s Percy Harvin and another target for Rodgers.

They have another special receiver in tight end Jermichael Finley who missed the Super Bowl run and most of the 2010 season because of a knee injury but is expected to be back this season. From what I hear he’s lost weight and eager to prove his talent.

I know you’re familiar with perennial Pro Bowl cornerback Charles Woodson. He can do it all. Woodson is a great athlete, who can cover, tackle, and blitz. Their young cornerbacks Tramone Williams and Sam Shields were playing so well that they were able to utilize Woodson as the nickel back and most NFL offenses weren’t ready for it.

Woodson was all over the place all year long making plays and causing turnovers. The Packers started using their three cornerback defense on second and third downs. Nobody has been able to throw the ball successfully against this defense.

Cornerbacks Williams and Shields were great during the playoffs. First time Pro Bowler Williams ended the Eagles season by picking off a Michael Vick pass in the end zone. He also picked off a Matt Ryan pass in their playoff battle with the Falcons and ran it back for a score. He’s got great speed, strength and coverage ability.

Cornerback Shields had a great rookie season. He’s a former track and football star from Miami, who came into his own last year as a cover guy and picked off two Jay Cutler passes in the NFC Championship Game. He can run with anybody and like Williams he can play man-to-man all day long.

The great cover ability of the Packers secondary allowed the Packers pass rush to get after opposing quarterbacks. Pro Bowl linebacker Clay Matthews is a dominating presence who will rush from anywhere. Pro Bowl defensive tackle B.J. Raji gets pressure up the middle, which stops quarterbacks from stepping up.

The Eagles should try to employ the same formula defensively which the Packers employed on their way to glory. If you’re going to play great defense nowadays in the NFL, you must be able to dominate opposing passing games. This is why I believe the Eagles should hang onto Nmandi Asomugha, Asante Samuel and Dominique Rodgers-Cromartie.

A Close Look At Why Chase Utley Has Been Heating Up

No doubt about it G-Man and I agree 100%
I think a 3 CB Set with Asmo covering 1 side and Samuel the other side and then have DCR roam middle of the Field (In th MLB SPot) to cover the TE/Crossing Routes/RB’s out of the backfield would be a great scheme/strategy to use.. DCR is rangy,with long-arms and great leaping abilibty with good hands, that he could cover any TE, disrupt the crossing patterns,and make plays on the ball and yes, even Blitz the QB from time to time..I would not trade Samuel at this point ..

I agree G. However wouldn’t one of the cornerbacks actually be playing a safety position. And which corner would be most effective at that position when the opposition attempts to run the ball to defeat this defensive alignment- Namdi or DRC ?

I think keeping the 3 corners helps utilize the pass rush.

I think the extra couple seconds with tight coverage will create more chances for Babin, Cole and the supporting cast.

Pick up Tatapu and maybe a vet Wr as insurance and maybe a big running back and we are set.

Sounds good Paulman. This tri-corner situation seems to bring all kinds of benefits we could never even think about before!

All I know is that 75% of the Earth is covered in water….the other 25% is covered by the Eagles secondary.

Nice Birdo. My question is can Nnamdi cover the TE?

ASANTE SAMUELS IS SUPPOSED TO REPORT TO CAMP TODAY, IM HEARING HES THERE NOW,SO ALL THERE TOP FLIGHT BIRD CORNERS ARE AT CAMP!

this is the year we are going for it, only way you move one is you are making yourself alot better at a lacking position. i think the eagles can get by at lb with the addition of cullen jenkins and babin. teams may try to run but the depth we know have up front we can bend a little at lb. no one is going to through with a lot of success. keep all 3 for this year and re-access next offseason. i think a veteran rb is the next target and wr since maclin is hurting. also lets look after djax.

I feel you G, I totally agree with you. I said this the day after the packers eagles playoff game that they need to build there team similar to the packers… Having those three corners gives you so much flexibility on defense… And they did exactly what i thought they should but man this was a smart move for them… ASANTE ISNT GOING ANYWHERE!!!!… Thats one of the reasons Nnamdi came to the eagles, he loves asantes game, real recognizes real… Then you throw DRC in there and a Cullen Jenkins and a babin, sheeeeeeesh thats already a SB team in all honesty… They are solid at LB with good depth, i d like them to get alil better there, at safety too but if there healthy i can see this team contending today for a SB…

Side note, there still not better than the packers and probably wont be until they head towards the playoffs or but they are in the same discussion as those guys and thats a big deal…

I agree somewhat, but I’m also still concerned about the WR corp. simply because DeSean Jackson will always be a major injury risk and the offense is half as productive without him. Jeremy Maclin is now a huge factor in the explosiveness of the offense. If either goes down who can the offense rely on? Cooper, Avant and Celek? That’s not going to take the team very far.

I tend to think that Watkins will work out well and the Eagles have a player on the team the can play right tackle…worse case scenario sign Shawn Andrews. Justice playing poorly, looking at it now, can probably be attributed to the knee injury, so I expect that to be fixed. As for the linebacker corp. I would have preferred the Eagles re-sign Bradley to play SAM, but between the D line and the secondary I don’t think offenses are going to have much time to try to capitalize on weakness of the LBs. I do know Kurt Colemen better keep it together..there’s going to be a lot of passes thrown his way.

While I want to keep Samuel and would prefer the Eagles make draft picks only trade to get Vincent Jackson getting Vincent Jackson should be pretty high up on the priority list since offensive explosion is critical to this seasons success and one of the explosive WRs is 170 lbs. soaking wet.

I hear you Butch, with Maclin being ill I am concerned as well…There are still a few good WR’s out there…some we may be able to snatch up for cheap…

Braylon Edwards is a guy that I wouldnt mind Eagles trying to get, if the price is right…

There are much more available, I just listed some of the guys I’ve seen…Guys that weren’t number 1’s or number 2’s

I didnt know the Eagles signed, Johnnie Lee Higgins – WR from Raiders only had 10 receptions last season for 100 plus yards…But this cat is fast as s%it