Danny Watkins Has A Lot of Work Ahead of Him 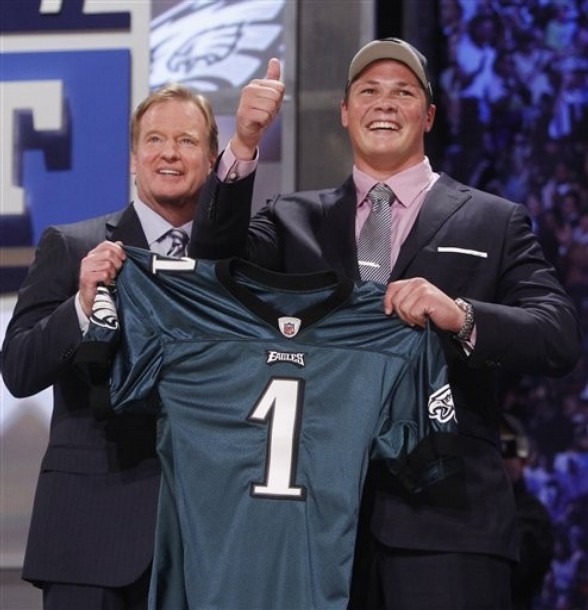 It was considered a surprise pick. With players such as offensive tackle Gabe Carimi, cornerback Jimmy Smith and RB Mark Ingram still on the board when it came time for the Philadelphia Eagles to pick, the Birds’ decision to select Baylor offensive guard Danny Watkins was seen as yet another miss in the draft.

However, Watkins was one of the last first-round draft picks to sign this week because he was seeking a four-year deal, rather than a three-year contract. Nonetheless, the deal was signed, and Watkins is now able to report to camp.

“This is a huge weight lifted off of my shoulders, that’s for sure. Ever since I got here a few weeks ago, I’ve been chomping at the bit to get in here,” said Watkins. “I understand there’s a business aspect to football. It’s something I’ve never cared for and don’t know much about. I’m just glad this is over with and we can get rolling.”

Because he was the last Eagles’ rookie to sign, he is a few steps behind. But Watkins is ready for the challenge and for the possibility that he could start come week one.

“I have to come in and compete. Nothing is guaranteed that I’m going to be a starter, by any means. That’s the coach’s decision, not mine,” said Watkins. “Like I said, I’ve been here for, you know, two weeks, and I’ve been chomping at the bit to get in. I’m eager to learn. It’d be an honor and privilege to get in front of Vick and let him work his magic…I want to come in and compete right away.”

There’s a very good possibility that Watkins will, indeed, be the starting at right guard. He will, however, have to prove his worth to the coaching staff. Knowing this, Watkins must be able to pick up the offensive scheme as quickly as he can.

“I’ve only played for four years and I felt I picked up the sport very good. I don’t think I’d be where I am now if I wasn’t a quick learner. I’m determined and dedicated to learn this as quick as I can and put all the hard work I can into it,” said Watkins. “I don’t know what to tell you on that. Like I said, I want to work as hard as I can and try to be prepared.”

It’s great to have Watkins in camp now, because as he put it in his conference call, he was chomping at the bit to get on the field.

“My agent knew that I was eager and wanted to get in and I left it in his hands,” said Watkins.

Watkins lined up at right guard with the first team offense this morning in his first day of practice as an Eagle, so the Birds are obviously letting him hit the ground running.

Report: Eagles Made An Offer To Randy Moss After His Retirement

Eagles Remain Mum On Maclin Illness, While He Works On The Side