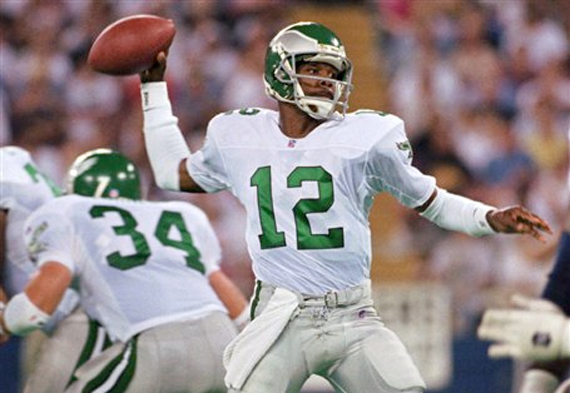 The Eagles have placed Steve Smith on the PUP list, which is the Physically Unable to Perform list. I’ve heard a number of people asking the question concerning Smith and a former teammate of mine, Randall Cunningham.

In New York, Smith wore number 12 on his jersey and of course that was Cunningham’s jersey number when he was with the Eagles.

You know the question I’m getting ready to ask. Should the Eagles allow Steve Smith to wear Randall Cunningham’s number 12 jersey?

IF a Number is not officially retired and availalbe, then any player should be able to wear it … If it’s that sacred, then have the # Retired by the Oraganization..
Paulman’s List of #’s that should be Retired

And someday # 05 McNabb should be retired too

I dont see nothing wrong with him wearing the 4th greatest Quarterback number in Eagles history. Now if we’re talking Mcnabb or Norm Van Brocklin I think its more of an argument because these are arguably the top 2 quarterback to ever put on a eagles uniform. Further more he plays a different position so we cant use an excuse as if he is following in the shadows of Cunningham. Now if I was a shooting guard playing for the bulls wearing number 23 then it would be more of a argument.

Eagles Roster moves,
WR S Smith on PUP list, and Eagles Release QB J Johnson, DT C Noonan and DT B Collier
They added 2 OT to the Roster (S Johnson and J TOledo) which tells me they still aren’t satisifed about the RT Position
G-Man tweeted that new OT R Harris and C J JAckson were not a camp this morning.. maybe something going on here.. (Injury or maybe HArris is AWOL). The word on Harris throughout his career has always been his inconsistent focus and lack of fire and how bad he really wants it.. Something to keep an eye on…

If I were in charge of that? I wouldnt let it happen, but the Eagles dont seem to be too strict there.

Paulman, none of those numbers should be retired, they are not even in the hall of fame, and none of them ever will be, including mcnabb

The answer is NOOOOOOOO! For those who think Cunningham was just a good QB your badly mistaken, If Buddy Ryan would of shown just a little intrest in the offense and gave him a decent O-Line he would of went down as the greatest Eagle QB, Steve Smith should do his Eagle history an came out an say he wont wear it out of respect, That would be a class act.

Randall Cunningham was the best pure athlete to ever wear a philadelphia uniform in any sport and a great quarterback, rifle arm, elusive, instinctive running back skills, a fiery competitor “let me be me”, my all time favorite eagle, and Andrew is correct, with the right coach he would be in the hall

He’s only here for one year, and he was a Giant. Screw that. You gotta earn it.

Randall had talent, but it never reached it’s potential. He won one playoff game in his 10 years as an Eagle. To me, you have to do more than that to get your number retired.

Disagree E ,he played up to his talent, but was not coached properly until he reached Minnesota

Not to change to subject, but here is an interesting stat from the Lions game last night
RB Mike Bell 5 Carries for 5 Yards…at least he’s consistent, Good Grief…

cunningham was the first of the new breed.. hes the only other player that has the throwing motion of vick and speed.. he was vick before vick but never got the coaching until he was like 38.. buddy ryan only cared about defense. i dont know what you guys think but to me randell was a pioneer.

Mike Patterson should have trouble making this team. After watching a slew of DT get penertration and make plays not only shouldnt he start but if Landri, Favorite, Jenkins and Dixon and Hargrove are all at tackle. With Cole, Tapp, Babin, Parker and Hunt or Teo Neshim at ends. Pattersons job should be in jeapordy. He is very avg with no pass rush ability. Also what a wasted # 1 pick on Brandon Graham. Expect him to be on IR all year.

Ryan Harris low back spasms, Jamaal sore knee, both day-to-day reported by Reuben Frank. Goodness Paulman they dont come out on the practice field and Harris may be AWOL?

I been on record that I didn’t believe M Patterson was a good fit for this style of Defensive scheme coached by Washburnand that he should have been the one traded (this was back before his siezure) .. Now I doubt anyone would trade for him now with his condition.. Eagles typically keep 10 DL (6 DE/4DT’s) ..
I also believe that Trevor Laws is in trouble of making the Squad
and that B Graham will be shelved and placed on IR and miss the entire season.. There is no sense in rushing him back at this time with the other talent at DE.. He will be 100% for 2012 and will replace J Parker’s spot next Season..

Right now, I thnik the 10 DL who make the final cut (Barring INjury are)

DE – Cole,PArker,Babin,Tapp,Hunt,Teo (B Graham placed on IR)
DT – Dixon,Jenkins,Hargrove and Landri (Patterson starts PUPand Laws is traded to the Panthers for a 4th or 5th Round pick)

No! No way! No How! When Cunningham goes in to the Hall of Fame will they reference his Vikings career when his team to scoring records. Or will they reference his Eagle career where dispite his passing running and kicking records he was trashed in favor of Rodney Pete and run out of town with his number “12” being given away? Philadelphia is better than that. I hope.

No! No way! No How! When Cunningham goes in to the Hall of Fame will they reference his Vikings career when he led his team to scoring records. Or will they reference his Eagle career where dispite his passing running and kicking records he was trashed in favor of Rodney Pete and run out of town with his number “12” being given away? Philadelphia is better than that. I hope.

Yes. Let smith wear 12. What did randall win us? Not even a playoff game. Smith won a SB…

Deepthreat, are you talking about when Randall Cunningham buys a ticket and visits the Hall of Fame? This is the only way I see him ever getting in.

Uh…the Eagles should plan on retiring #12 and tell Smith to pick another number. Randall Cunningham was one the 3 or 4 “Elite” QBs in the game for 85% of his career. It’s disrespectful to Cunningham and it’s disrespectful to the history of the team and that period of winning for anyone else to wear that number in Philadelphia green. Randall Cunningham was more important to team in that era for the team than Reggie White and Reggie White has his face all over the Linc.

Among McNabb, Cunningham and Dawkins, only Dawkins is a HOF player. Oh, and Harold Carmichael.

Reggie White was the greatest defensive end in the league’s history.
Randall was a gifted athlete that relied on his legs more than his arm, had trouble reading the blitz, and had an overall disappointing career.

Football teams can’t just retire numbers willy-nilly, they have 55+ players that need a number, and football requires certain positions to wear certain numbers. Sorry, but Randall isn’t worthy. McNabb’s career will probably warrant having his number retired, Randall does not.

Hart and e-money- I’m sorry that you could not appreciate one of the greatest athletes ever to play football here in Philly. I’m sure it probably spoils your Football Sunday having to watch M. Vick running around the field throwing touchdown passes all day too.

Randall was my favorite player growing up. That doesn’t make him a hall of famer. His numbers don’t warrant him being there.

Vick is better than randall already… Point blank… E money why would you mention the two in the same sentence? Now the number should be used because for what reason should the eagles retire it? Because he was your favorite player growing up? Haha i beg to differ… What did randall do for us? Never won a playoff game, wasnt accurate, all he did was run around. He didnt even try to improve his accuracy… In 92′ that was his best year completion wise. I was a fan too but hes not even better than donovan mcnabb honestly. 12 can be used, 5 should be retired, 20 should be retired, 36 can be used too… Im tired of this discussion…

I meant Deep threat not E money… smh, my fault

Cunningham ran the ball from the quarterback position mainly because he had inadquate protection on the O- line He was genius at eluding pass r
unblocked pass rushers (scrambling) and in the process extend a negative play into a positive one by either completing a pass or running for a first down. Defenses had no answer for him. He was the “Ultimate Weapon”. A prototype of the running and throwing QBs we see today.

Never saw cunningham play, but from what I’ve read/heard is he was like a vick before vick came to philly except vick is a greater athlete. Also definitely think mcnabbs, dawkins, and possibly westbrooks and akers numbers be retired. But why is there even an article about this? Its just a number.

Randall Cunningham has better career stats than Joe Namath. If you didn’t know Joe Namath is in the HOF.

4x ProBowler ,NFL MVP, Player of The Year were among a number of awards Cunningham earned before he came back and resigned with Philadelphia so that he could retire as an Eagle. The least we could do is retire his number.

thanks for referencing those accolades for 12 deepthreat, these clowns who don’t know, can’t appreciate the ultimate weapon are missing a very important piece in eagles history

The Philadelphia Eagles do not Retire numbers

The Eagles do not win SUper Bowls either…
Hopefully this is all about to change, this years Team is All-In and now it’s up to the Coaches and PLayers to go out, play together and hard, and wina Championship..

Randalls number SHOULD be retired! He made football in Philly exciting and he was a one man offense, If Buddy Ryan and the ownership weren’t so cheap and got Cunningham a real runningback and recievers like he had in Minnisota (Moss and Carter) Randal may have won 2 or 3 Superbowls.

Chap, made football exciting when during the regular season? Because he never won a playoff game here. Retire his number? For what? Cmon man. The should retire Dawks number and thats it, Mcnabb im still iffy on, westbrook no, he could barely play a full season had alot of durability issues… But again no on the randall number being retired…

He was a good player, very entertaining. That’s it. He was hardly without weapons, what he did not have in Philadelphia was Brian Billick disagnosing the defenses as he walked to the line, and telling him via radio where to throw the ball. Randall is the reason the radio gets shut off in the qb’s helmet as the play clock winds down, so they cannot keep coaching them up . No to Westbrook, sorry David A, not Jaws, maybe Dawk. But he still failed in the big game. Win the whole thing, then you can have your number retired, like Lefty, Schmidt, Doctor J, etc