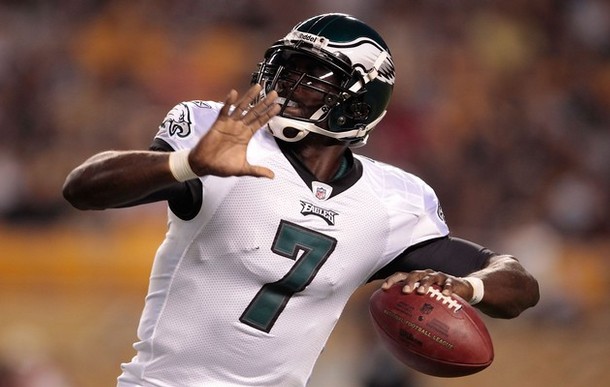 There’s no question about that Michael Vick had the worst game of his time with the Eagles. The good thing is that it didn’t count. Let’s take a look at Vick’s three interceptions.

On the first pass, Vick thought he was looking at a straight blitz where the secondary is playing man-to-man behind it. Unfortunately he didn’t think about Steelers defensive coordinator Dick LeBeau love of the zone blitzes where he plays a zone behind the blitz. I don’t think it was a straight zone, but Vick didn’t realize there was a free safety back there.

On the second interception, Vick was staring down Chad Hall on a crossing route. The diminutive receiver started out on the offensive left side and came across the field to the right side. Vick followed Hall all the way across the field without looking anybody off.

Not only was Vick setting up the interception, Hall wasn’t running away from the defender,who very easilty cut in front of him for the pick. I could understand Vick not seeing one guy, but there were two other players there in the area, who had a chance to pick off the pass.

On the third pick, Vick was scrambling around in a frenzy. During those times, he should know to run with ball or throw it away. He tried to get it to Brent Celek who was open, but one of the Steeler linebackers got his hands on it to force the incompletion.

Vick was five of 12 passing for 47 yards, with a 13.5 quarterback rating. He also threw as balls to the Steelers as he did to his own receivers.

It was the first time since last’s years pre-season that I though he reverted to his Atlanta style of play. Hopefully it was just a small step back that he will work to overcome.

Don’t forget, the Steelers were in the SuperBowl last year. They are a very good team.

Fortunately today is only August 19th… Fortunately the Eagles play a clunker like this every preseason. I am however concerned with some defensive holes. Matthews doesn’t seem like a playmaker to me. Safety might be a problem, and we need to get our biggest defensive tackles healthy fast… Other than that, it’s PRESEASON, it DOES NOT COUNT!

Chad Hall is not a pro receiver. He can’t get separation. What’s the facination
with little guys that Reid loves them.

Riley Cooper does he understand that if the ball is in the air and he cant get it he needs to make an attempt for the defense not to catch it? Come on Cooper didnt you learn your lesson from last years playoff game with that half ass effort on the last play against GB?

Riley Cooper, Celek, Hall and Avant playing on the outside cant get seperation. When Maclin, Desean, Avant and Smith in the slot are all there. game on. Donald Lee may need to be the #1 TE.

I think the Eagles need to shake some players up and put everyone on notice.. I think cutting or trading a veteran who is not performing will send a strong message ..No time to panic, but definitely time for these players and coaches to have more of a sense of urgency that what has been shown so far…
Remember that in 4 Preseason games, you really only have about 2 full games of worth of prepartions,game planning and execution to do (the 1st Half of these games and even the final game in Preseson typically won’t have starters in it due to injury exposure so it’s even less than 2 full games)..

When is are we going to give Avant some damn respect and split him out wide? The dude is SO SO SO underrated it’s ridiculous.

Avant is simply not fast or quick enough to play the outside RTB,
If you can’t get any separation, then you can’t get open..He is a very good slot Receiver and works the short and middle routes which is what he’s best at..

RTB – I hear you on the Avant love, I’m right there with you. But if you’re putting him outside, what are you doing with 10 and 18? We all know putting 10 inside is silly. So you’d rather have Maclin in the slot and Avant out wide?

@BigE:
The fascination isn’t related to smallness, but favoritism to a particular religion (got it?)… Hall, Mahe, Kevin Curtis and they’re not the only ones Reid kept on rosters over years when most should have been released long before and not all were receivers, linemen/rb’s too.

RUN …..i must agree AVANT = UNDERRATED

“Chad Hall is not a pro receiver. He can’t get separation. What’s the facination
with little guys that Reid loves them.”

I agree with this %100!!! Why is he running with the first team offense ??? He shouldn’t make the Team with the # of WR’s the Birds have this year. I don’t understand…

Sully, um, with all due respect, you really don’t know why he’s running with the first team offense? Because of Maclin! Give it time.

I’m not sure Higgins makes it. Maybe Moss. But I wouldn’t be surprised if they only keep 5 Wrs this year.

I also have a fantasy that they keep C Ingram as a 4th TE/6th WR too. Or hell, I haven’t seen much out of Clay Harbor, so mabye ingram makes it ahead of him as #3 TE… who da heck knows.

Did Clay Harbor even play last evening.. Haven’t seen much of him this season..
Another roll of a the dice on a small-school player to make it to the bigs..

Chad hall is running with the 1st team because he knows the offense…If you are trying to work on things with the #1’s get them in rythm etc..you want players out there who know what they are doing and not guessing…Avant, Cooper and Hall , #10 just into camp everybody else is learning which is why they run with the 2’s and 3’s so they all can learn together

Actually, I’m wondering if Sinorice Moss should have Hall’s spot on the roster, but I have to see more of that guy.

Higgins is slotted as the Punt/Kickoff returner so even if he never plays a down at WR he’ll be on the roster.

Vick was horrific on Thursday. He was trying to do way too much. He didn’t look like the old Vick, because he would have at least of ran with the ball. We will be much more deadly, once Maclin & Smith get in there. Thank God it was only pre-season.