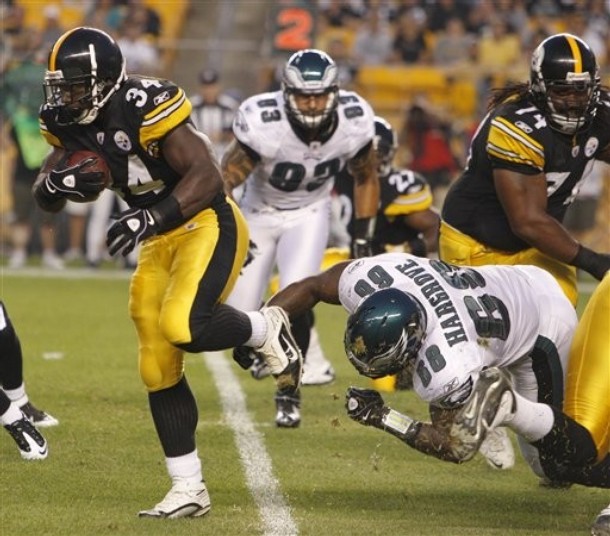 Here’s my take on the defensive performance after a quick glance at the game. It surely was nothing to write home about for Juan Castillo and the Eagles defense.

The Birds defense didn’t play well for most of the game. They allowed the Steelers to control the ball, the clock and the game. The most disappointing thing about the defensive performance in the game was the fact that they couldn’t get off the field on third down. The strength of the defense is supposed to be their pass defense and pass rush. Neither got the job done with the game on the line.

All of that talk about simplifying the coverages and the defense hasn’t showed up during the game.

Trent Cole made his presence known during the game. He pounded Steelers backup quarterback Byron Leftwich to force him to throw out of the end zone. He also made plays against the run by getting into the backfield. Cole looks like he’s ready to start the season.

Left defensive end Jason Babin did a good job of being disciplined on the sack he got. He was turned loose by the Steelers offensive tackle, so he got upfield and was able to get the sack before Ben Roethlisberger had a receiver come open downfield. He chased downfield and made a tackle on a pass completion.

Defensive tackle Anthony Hargrove picked up a coverage sack in the second quarter. He was initially blocked on the play, but he kept battling and was able to get to Byron Leftwich.

Juan Castillo – The first guy I must call out on the defensive side of the ball is Juan Castillo. The Birds were supposed to be simplifying the defense, but guys were running free all over the place. That’s been the case for the two games the Birds have played so far this preseason.

This defense was awful last night. Castillo has to do a much better job than this. They let the Steelers convert a 3rd and 24 by simply

sending a receiver straight down the field. Nobody jammed him and covered him. That was pathetic to say the least.

Nate Allen – I know Nate Allen is coming off of knee surgery, but he looked completely lost out there last night. He was unable to cover tight ends or third receivers. It’s almost like their game play was to get Allen isolated and get the ball to whomever he was covering. He was the guy chasing HInes Ward on the touchdown pass.

On the first touchdown pass which the Eagles surrendered, Allen was a free blitzer who hesitated and allowed Ben Roethlisberger to make an easy pass for six points. Allen was also the guy closest to the receiver when Leftwich and the Steelers converted a 3rd and 24.

Casey Matthews – I hadn’t gotten the chance to see Matthews play some extended reps, so I was eager to check out this young middle linebacker in action. Unfortunately, I was disappointed with what I saw from him last night. He got swallowed up by the Steelers big offensive linemen.

Numerous times he was left trying to tackle running backs at their ankles. I saw him get dragged for a few yards on one instance. He didn’t stand out and made no plays of note. The Eagles coaches have to be concerned that they may have to make a change in the middle.

Defensive tackles – The Eagles must get more of a pass rush from their defensive tackles or quarterbacks are going to be able to step up into the pocket and avoid the pass rush pressure coming from the defensive ends, who are getting up the field outside.