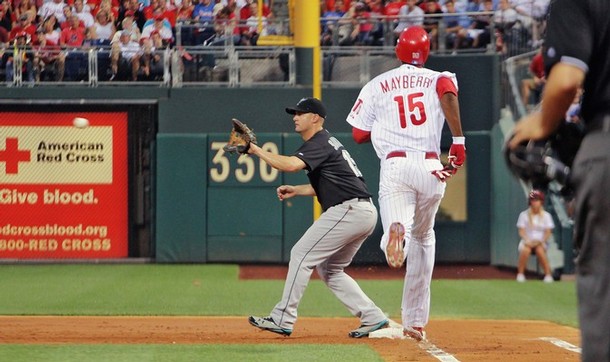 The Phillies won two of their three games against the Mets earlier this week, and began a series with the Marlins on Friday, hoping to further reduce their magic numbers to clinch a playoff spot, and homefield advantage.

After throwing eight scoreless innings in his previous outing against the Nationals, Roy Oswalt’s play fell off on Friday night, allowing six runs (five earned) on 12 hits. He had only one clean inning (the third) where he didn’t allow a baserunner. Five of the 12 hits allowed by the right-hander went for extra-bases.

Oswalt allowed the leadoff hitter to reach base to start the inning in every inning but the third. Though the crafty veteran was able to limit the damage to just two runs over his first five innings, the wheels came off in the sixth inning. He allowed three straight singles to start the inning, and then gave up a grand slam to Marlins’ catcher John Buck.

Ryan Howard made it a game in the bottom of the sixth inning. With two runners on and two outs, the first baseman hit a three-run homerun off of lefthander Michael Dunn to make a 6-4 ballgame. The Phillies had an opportunity to score more runs in the inning after a double from John Mayberry put runners at second and third with two outs, but Carlos Ruiz flied out to right to end the threat.

The bullpen performed well in relief of Oswalt. David Herndon entered the game in the sixth inning, and recorded the final out with a runner at second. He also pitched a scoreless seventh inning. Herndon has not allowed a run in his last 13 innings, and has lowered his ERA to 3.43.

Mike Stutes took over in the eighth inning. He allowed a double, but was able to bear down and get himself through the inning without allowing a run, striking out the side. It was a nice appearance for the rookie, who had an ERA of 6.10 for the month of August entering Friday’s game. He hadn’t been receiving many opportunities to pitch in important spots, and did well in his chance to restore confidence with Charlie Manuel and Rich Dubee.

The Phillies were unable to come up with enough timely hitting to complete the comeback. In the eighth inning, the team had runners at first and third with two outs, but Mayberry was called out on strikes. Then in the bottom of the ninth, Michael Martinez doubled home a run with one out, but Shane Victorino and Placido Polanco were unable to do anything to sustain the rally.

It was an entertaining game that the Phillies unfortunately ended up on the losing side. They’ll try to rebound tomorrow with Roy Halladay on the mound.

Player Of The Game: John Buck

The Marlins’ catcher went two for three at the plate and also walked once. He delivered the knockout punch in the sixth inning, hitting a grand slam off of Roy Oswalt that put that gave the Marlins a 6-1 lead, which would prove to be insurmountable on this particular night.

Back Surgery For Eagles Right Tackle Ryan Harris, Out Indefinitely