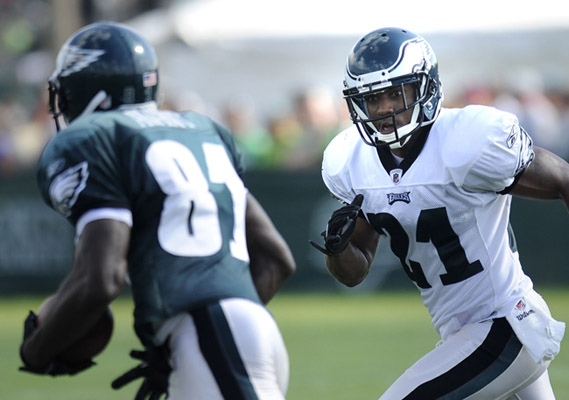 A couple of weeks ago, you read my belief that Eagles cornerback Joselio Hanson was going to be traded, now it’s coming to past. There have been numerous reports that the Eagles have received offers from a couple of ballclubs for Hanson.

I don’t know the truth of those reports because it would serve the Eagles purposes to put those reports out there to drum up interest in Hanson. I do think he has a great deal of value for specifically playing the nickel position. He doesn’t have the big time speed to be a quality corner unless he’s playing in a cover two system, but he’s very adept at playing the nickel spot.

Hanson does a great job of beating up on slot receivers. He’s not fast but he is quick and most of the time, slot receivers are more quick than they are fast, so the cornerback matches up well against them. He has a good feel for blitzing and making tackles against the run as a nickel back.

There’s no way the Birds are going to keep him on the roster when he’s slated to make over $2 million dollars as the team’s fourth, fifth or sixth best cornerback. They are paying big money to both Asante Samuel and Nmandi Asomugha, plus in a year or two they’re going to have to fork out some big bucks to Dominique Rodgers-Cromartie.

On top of those three, the Birds have a number of younger cornerbacks who are better prepared to play on the corner than Hanson.

The Eagles player personnel people feel very good about their rookie third-round pick Curtis Marsh. He’s still learning but he has a tremendous upside. Trevard Lindley is in his second-year and he has tremendous combination of size and speed. Then you have another second-year corner in Brandon Hughes, who has turned a lot of heads in camp.

Hanson is a better nickel back than any of these youngsters, but I would prefer them on the corner in man-to-man coverages with no help over the top, than putting the veteran out there who have the speed to run with elite wideouts.

ESPN The Magazine Removes Rendering Of A White Michael Vick

There are too many teams that need a good corner. If they wait for him to clear waivers, they will surely miss out. Best thing to do for him and each club as trade him to a decent team that offers a mid-round pick. Then it’s a win for everybody.

The Giants should be first in line to offer a 6th rounder for Hanson. Hanson is not a bad corner back.

No way I would trade him to the Giants. I’d take a 7th and send him
out of the division.

Sooo… what are the trade offers?

The Eagles held Hanson out of action in Thursday’ sPre-Season to protect from Injutry.. Teams that are in need of a slot CB are many, but here is a quick list
Bills,Dolphins,Vikings,Seahawks,Panthers and of course the Giants with all their recent injuries
Teams have to cut from 90 to 80 Active Pyayers by Tuesday (8/30) and then Cut-Down to 53 by the Following weekend so that’s a ton a players that will be availalbe (About a 1000 players in all) for everyone to size up and bring in.. Team that are in need have 2 decisions to make, ca nthey wait another 10-14 days and get HAnson on the cheap as a free-agent after Eagles Release, or do I want to bring HAnson ini righgt way to get a coupld of week jump on our Teams schemes and formations and am I willing to give up a 5th/6th Rounder to do that plus pay Hanson’s current Salaray ($2.4 Million for 2011 which is very unliklely)
If the Eagles get no bites by this weekend, they may as well let him go sooner to focus on who will be making the squad.. I think B Hughes makes this Roster and that Draft Pick C Marsh comes up with a mysterious Injury (a Calf injury) so they can place him on IR and keep on the Team

A real tough Decision on Safety where Colt Anderson is probably on the outside looking in… Maybe the Eagles keep 5 CB and 5 Safeties but is unlikely..
Eagles Safeties for 2011
Starters Coleman & Page, Back-ups N Allen and Jarrett

Hanson can be an ok starting corner on a cover 2 defense or the slot as he is on the Eagles. $2.4M is reasonable for a team in need of a corner. There are many teams with good cap situations that may bid up Hanson if he is a free agent. There is a chance to add to the 11 draft picks, but the Eagles may expect too much for him. I agree with Pman that Hughes or Marsh end up on the IR with a sudden inury. Teo should hope the training staff thinks he should be placed on IR with a leg problem to extend his chance to play in the NFL.

I think Dunlap was lifeless last Thursday and was far worse than any other lineman. Herreman at RT was announced and not a surprise. Andy let other guys try to earn the spot, but no one played well enough. That’s all a player can ask or is chance.

guys 3 spots left in the fantasy football league. For an invite shoot me an email astuckey05 at gmail. com