Switching Chaney And Matthews Gives Them Better Chance To Succeed 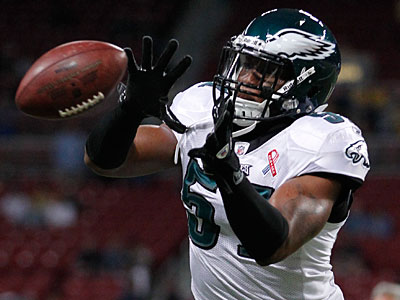 So far this season, Chaney has been struggling at Sam linebacker. He was overmatched against future Hall of Fame tight end Tony Gonzalez and he didn’t play that well in the first game of the season against the Rams.

Put that together with the struggles of rookie Casey Matthews at the middle linebacker position, and it made sense for them to make the switch. Matthews didn’t look like he belonged on the field during much of the Atlanta game.

A number of times he got turned around in a circle, there were other times when he was pushed around. After being the starting middle linebacker for the Birds in four preseason games and two regular season games, Matthews was getting worse rather than getting better.

I don’t know if the moving of Chaney to the Mike position will be the answer to the Eagles problems against the run, but it’s a step in the right direction. Chaney is a natural middle linebacker who has good instincts to get to the football and make tackles, but he proved that he isn’t a Sam linebacker.

“I like to look at the whole offensive line, all the way to the fullback. Being at the MIKE, you can see all of that. At the SAM, you can pretty much see half of the line,” Chaney said.

Chaney will attack the blocking scheme and that is a must. The middle linebacker in this “Wide Nine” alignment doesn’t have the freedom to hesitate on his reads. He must be sure and immediate with his recognition and his footwork must be perfect.

Some guys have that ability to read plays in an instant and find the football while others players just can’t get the job done. I believe Chaney has that ability.

It was a disservice by the Eagles to put this rookie, Matthews in the middle of the “Wide Nine” and ask him to succeed. He got exposed and it could have been much worse. He was getting his clock cleaned on blocks by the center, guards and the tackles. It seemed that he had no idea what he was doing near the end of the Falcons game which is amazing.

On the 61-yard run by Michael Turner in the fourth quarter of the Atlanta game, Matthews had no idea where the ball was.

Matthews has a better chance of being successful at the Will linebacker position than at Mike. I’m not guaranteeing that he’s going to be successful at Will because he might not be fast enough to succeed at that spot.

“Really, it just puts us all back into our natural positions,” Matthews said yesterday about the changes in the lineup. “Jamar played middle last year, Moise played strong-side last year and I was a MIKE last year (in college at Oregon), but really I played outside a lot, so I’m comfortable there. It’ll work.”

The Will linebacker position requires that you cover the best pass receiving running backs in the league. Many times offenses will split the halfback out to get him matched up in a one-on-one situation with Will.

Will must have the instincts to get to the ball, but he won’t have to deal with offensive linemen attacking him from both sides. He’ll know where they’re coming from, which will make playing the run simpler for him.

I think he’ll be challenged at this position by Brian Rolle and Keenan Clayton, who are faster and better coverage guys. Matthews will have to show that he’s a better run defender than these smaller linebackers.