Eagles Defense Should Expect A Major Dose Of Jacobs & Bradshaw 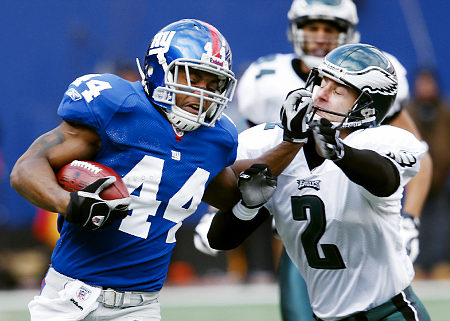 The New York Giants wide receivers have been decimated with injuries. Quarterback Eli Manning is coming off of a year when he led the NFL in throwing interceptions, so passing the football hasn’t been an easy thing for the Giants to do of late and it doesn’t look to get any easier this weekend against the Eagles.

The Birds have one of the best pass rushes in the league led by Trent Cole, Jason Babin and Cullen Jenkins. In addition, they have three Pro Bowl cornerbacks, Asante Samuel, Nmandi Asomugha and Dominique Rodgers-Cromartie to match up against the Giants depleted wide receivers.

Starting New York wide out Mario Manningham suffered a concussion on Monday night against the St. Louis Rams. He hasn’t practiced yet this week and his chances of playing on Sunday are very slim.

The Giants third wide receiver Dominic Hixon made a brilliant touchdown catch on Monday night against the Rams. Unfortunately, he tore his ACL while making that catch and is done for the season. This is the second-year in a row that Hixon has gone down with an ACL tear.

Manning has one talented and experienced wide receiver in the prime of his career and that’s Hakeem Nicks. Nicks has great size and playmaking ability. He’s extremely tough in the red zone. The former North Carolina Tar Heel

has huge hands and can make the unbelievable catch. Asomugha is the perfect matchup for him.

Joining Nicks in the New York receiver corps will be 35-year old Brandon Stokely, who has been in the league for more than a decade and was signed a week ago to give the Giants some wide receiver depth. Stokely has good speed although he’s slowed down as the years have gone by. He’s capable of making big plays and seems most effective when working out of the slot.

The Giants also have the inexperienced Victor Cruz, who has caught a grand total of two passes in his NFL career. The other receivers on the New York roster are Devin Thomas, who was drafted by the Redskins in the second round and failed to live up to his billing. Rookie Jerrel Jernigan is also on the roster.

The more you look at the situation the more it would make sense for the Giants to the put the ball on the ground and try running the ball down the Eagles throats.

They have a power back in Brandon Jacobs, who is a big 265-pounds hard-charging ball carrier. He’s had some good days against the Birds and I could see Tom Coughlin giving Jacobs the chance to attack the middle of the Eagles defense.

Jacobs is paired with Ahmad Bradshaw, who is a speed back, who has great vision and cutting ability. Bradshaw can make the big run and does a great job of hitting the holes quickly. He’s got the big play speed and can take the ball the distance every time he gets his hands on it.

Both Jacobs and Bradshaw have demonstrated that they have the ability to take over a game and dominate it. Expect the Giants to come out pounding the ball in between the tackles, then if they have some success they will put in the air with safe play action passes.

I wouldn’t be surprised if they attempt some screens and short throws to the backs and tight ends. The interception-prone Manning will want nothing to do with the likes of Samuel, Asomugha and Rodgers-Cromartie.

Of course the Eagles explosive offense could force the Giants out of their game plan by putting some early points on the board.

I think the Eagles need to come up and put eight men in the box. Either Kurt Coleman or Jarrad Page should be lining up by the line of scrimmage and dare Manning to throw the football. At times I would like to see the Birds move Cullen Jenkins outside to the left defensive end position, so that they can get bigger up front.

Running the football effectively is the only way the New York offense can move the football. Their defense must keep the Eagles out of the end zone and they must force a turnover or two.

The Eagles should be able to win this football game, if they can do a decent job of stopping the New York running attack and stay away from turnovers.

Eagles Want Chaney In The Middle Against The Giants, But…………

Vick Needs To Expect The Blitz From HIs Left Side