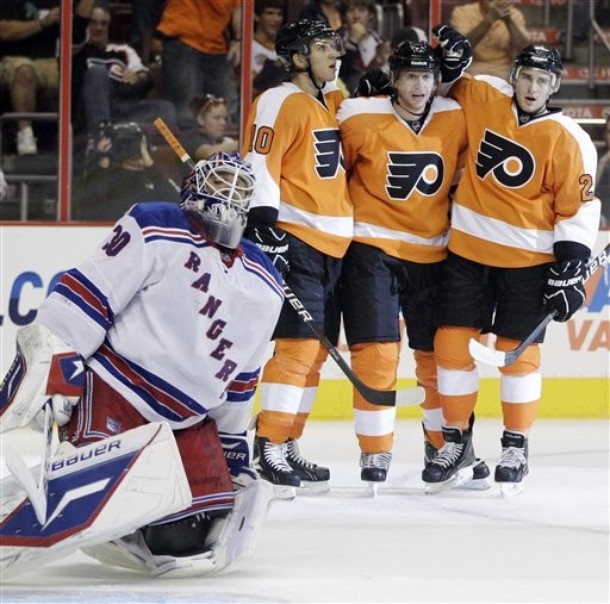 The NHL “announced” earlier today that the Philadelphia Flyers will face off against the New York Rangers at Citizen’s Bank Park on January 2, 2012- a game that has been unofficially confirmed for about six months. The only two pieces of information that fans are still anxiously awaiting- the look of the official Winter Classic jerseys and ticket information- are still unknown.  In what may have been a showcase of things to come, the Flyers edged the Rangers tonight in a hard-hitting 5-3 preseason win in Philadelphia.

My thoughts on the game:

Finally, the biggest story of the game was the boarding penalty and subsequent game misconduct called on Tom Sestito after he crushed Rangers prospect Andre Deveaux. The hit was almost identical to that which earned Jody Shelley a ten-game suspension and is guaranteed to be reviewed by Brendan Shanahan. That makes three Flyers with blatant boarding penalties in five games. Factoring in Sestito’s otherwise liable play in his previous appearances and it’s safe to say he isn’t making this team.

The irony of this preseason is that the one player who I thought might not be mature enough to handle the agitator/enforcer role- Zac Rinaldo- may now win it by default. His fight with Ranger forward Dale Weise had to be stopped by referees early because Rinaldo almost immediately pulled the jersey over the head and went Chris Brown on him.

While he otherwise stayed out of the penalty box, Rinaldo shoved Rangers defenseman Michael Sauer hard towards the board in the first period. The fact that Sauer’s stick clipped Rinaldo in the face in the same play may have saved him from going to the sin bin, but Sauer left the game with a shoulder injury and is now questionable for the start of the season. Coach Peter Laviolette also limited Rinaldo to 7:24 of ice time, just over half of what Zolniercyzk earned.

In other words, Rinaldo may make the team, but there are still plenty of questions surrounding his immediate future in the NHL.

The Flyers don’t play again until Thursday, when they take on the New Jersey Devils. It will be interesting to see who remains in training camp until then.

This is a taste of what the PP can be with Jagr, Briere and Giroux plus the big guns at the point. I agree with your points except on Bryz. I went to the other game that he started and saw the highlights of this one. He has had crazy deflections and the 2nd goal last night was a defensive breakdown which left a guy wide open in front of the net. They paid this guy to play and he will play. I think that the max that Bob will get will be 15-20 tops and I don’t think that it would be that high.

That’s fair. I didn’t mean to suggest Bryzgalov was playing badly- it’s more that Bob has played very well. I still expect Bryz to get the majority of the starts, but Bob could see more starts if the team struggles out of the gate.