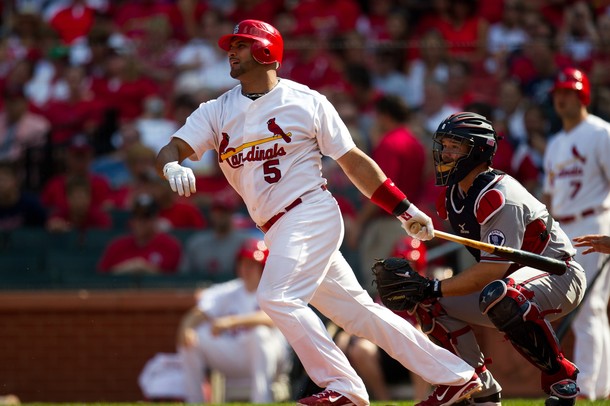 The epic collapses and improbable Wild Card drama is in the rear view mirror. The Major League Baseball playoffs are set and our Phillies have drawn the St. Louis Cardinals in the National League Division Series. While I don’t hate this matchup for the Phils, I don’t love it either.

While I’m glad we avoided Milwaukee in the NLDS, I would have much rather faced off with young, inexperienced Arizona instead of St. Louis.

The Cardinals are hot. They just overcame an 8 ½ game September deficit to be in this position. Say what you want about the Braves and they way they played down the stretch, but it’s a pretty darn impressive feat no matter those circumstances. It’s even more impressive when you realize they did the majority of the work without Matt Holiday. They remind me, somewhat, of the 2007 Colorado Rockies who came into the playoffs hot, stormed into Citizens Bank Park, and embarrassingly swept the Phillies in that year’s NLDS.

Pujols has been his usual stellar self. Berkman has been rejuvenated this year. He has been the Cardinals’ MVP this season and the biggest reason why they are where they are. They wouldn’t be here without him. The wild card, no pun intended, here is Matt Holiday. His status for this series has not been disclosed but if he plays he would reform one of the most devastating 3-4-5 combos in the league and would make the Cards even more dangerous.

That being said, Roy Halladay, Cliff Lee, and Cole Hamels, are Halladay, Lee and Hamels. They are prime-time playoff performers. Their stuff is so out of this world that they can make any 3-4-5 look like a little league lineup. Is there anyone else in the Cards’ lineup beside Pujols, Berkman, and Holiday that even potentially scare you? Me neither, especially against our three starters.

The St. Louis pitching staff is above average but, outside of Jamie Garcia, they shouldn’t test the Phillies too much. The Phils lineup is way too good from top to bottom to be challenged by the likes of Kyle Lohse, Edwin Jackson, and a down trending Chris Carpenter. Jamie Garcia is the only real threat on that staff to the Phillies. He’s the type of crafty lefty that this lineup has historically struggled with.

Garcia is St. Louis’ staff’s only hope, which is why I found Thursday night’s rotation news very peculiar. Reports state that Tony LaRussa has decided to pitch Kyle Lohse in Game 1, Edwin Jackson in Game 2, Chris Carpenter in Game 3, and Jamie Garcia in Game 4.

Why wouldn’t he throw his best pitcher in Game 1 with a chance to use him again later in the series? It makes no sense to me. Garcia has been phenomenal against the Phils in his brief Major League career compiling a 2-1 record with a 1.20 ERA in six appearances. That includes a 0.60 ERA in two starts this season vs. Philadelphia. Not starting

Looking for an offensive stud for the Phils in this series? Look no further than The Big Piece, Ryan Howard.

Howard has just tortured his hometown Cardinals throughout the course of his seven-year Major League career. Take a look at his stats vs. St. Louis: .360 BA, 16 HR, 50 RBI. That’s insane. He clearly thrives in the hometown team environment and now he has a chance do it on the big stage. I know he’s been dealing with heel issues lately but the recent rest has done nothing but help. I expect big things from The Big Piece in the coming days.

My final prediction: Phillies in 4. I see the Cards taking Game 3 at home but by that time it will be way too late.