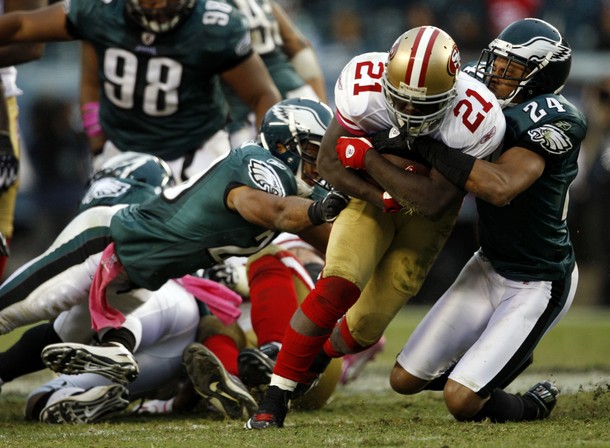 Going into this past Sunday’s matchup against the NFC West San Francisco 49ers, there wasn’t a worry in the world that the Eagles would come out on top. The Birds would finally figure out things on defense under defensive coordinator Juan Castillo which in turn would finally take him out of the hot seat for a week. But more importantly the Eagles would improve their disappointing record of 1-2 to 2-2, giving them the turnaround they needed for their frustrating season.

But let’s not get too ahead of ourselves, someway, somehow the men in midnight green took a 23-3 lead halfway through the third quarter against the 32nd ranked offense in the league, and laid a complete goose egg handing over yet again an absolutely confounding loss to the Niners.

It seemed as though reality did not set in until 7:52 remaining in the third quarter that the Eagles realized that they still had an atrocious defense. Up until then then the Birds were doing everything right. They were forcing turnovers. Their new acquisitions were racking up sacks. The Eagles looked like the team that fans were supposed to be seeing all season. But then the defense started looking like the team we’ve seen up to this point. They started making Alex Smith look like Joe Montana and made making fantasy football fans smack their foreheads for not starting Frank Gore this past week.

That is just a sample of the complete debacle that occurred in the Eagles second half meltdown against the 49ers. The game left critics wondering who was to blame now. Do we point the finger at Castillo for only making good play calls in the first half, or do we put the blame on the Eagles “Dream Team” defense that got their hearts ripped out of them as they saw a 23-3 lead turn into a 24-23 win for a team that had absolutely nothing to lose?
It got to the point where starting quarterback Michael Vick, who threw for an outstanding 400 plus yards in the contest, put the reason for the total collapse on his shoulders. I don’t care what anybody says, there is no reason

why a defense full of superstars should give up 19 points in the second half versus the worst offensive team in football.

After last week’s loss to the Giants and putting most of the heat on the first-year defensive coordinator Castillo, I think you can now turn your attention to the players on the field who are starting to make their lucrative contracts look like lousy investments.

Head Coach Andy Reid defended his players this following the loss saying, “I don’t blame the loss on the complacency of the defense. The effort was there. There was no doubt about that.” Perhaps Coach Reid was coaching on the sidelines of another game because it was clear that complacency was at an all-time high when it only took 19 plays for the Niners to waltz all over this defense on their way to 234 combined yards and three touchdowns. It looked as though the Niners had put their offense on All-Madden while the Eagles D was left at Rookie setting. Yes, the 49ers trimmed what was a 20 point deficit as if it were a video game being played. It took the Eagles a combined 21 plays just to get a TD and two field goals in their second quarter scoring run.

You could attribute the change in play calls on the part of Niners offensive coordinator Jim Harbaugh as to how they found a way to figure out what the Eagles were trying to do on defense. Excuses are few and far between when you let a man who has a dismal 2.7 yards per carry average on the season entering the game come in and look like a Gore who is completely healthy and racking up 1,000 yard seasons one after the other.

The former Miami Hurricane entered the game with his longest rush being just 16 yards and in the game previous had 17 carries for 42 yards. In this matchup he ran for two less carries for 112 yards. The game permitted Gore to look as though he was turning around his season too bad the Eagles defense couldn’t have the same luck.

Last week Castillo talked about fundamentals and progressing over the weeks in this area. It showed that progression still needed to be made in this category when cornerback Asante Samuel failed to wrap up the running-ramped Gore from breaking the plain of the goal line for the Niners winning touchdown.

Cornerback Nhamdi Asomugha commented on the team’s performance down the stretch as well as that last play. “You can’t be up 23 to3 and then lose it. . .It’s fourth quarter and we’re still up 23 to 17 and we kept saying in the huddle its 23 to 17 and if they don’t score we win. They drove down and did a run to the right side and got in.” While this was the perspective of the players down to the last series, this could all have been avoided if giving the same effort the whole game.

The Eagles are running out of answers with four games in the books but still have yet to have a consistent starting defense put in place. The birds will continue to roll the dice trying to find a core that can both contain and cover, but more importantly a cast that can finish ball games. Reid has made it clear that he is sticking with the former offensive line coach at defensive coordinator, so at this point they are just trying to put the absolute mess that occurred in Sunday’s defeat behind them and move on to what is in store against the Bills this weekend.