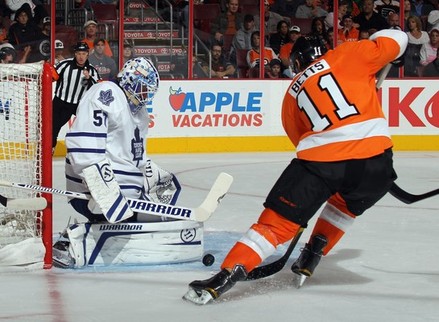 [Editor’s Note: Brayden Schenn, Harry Zolniercyzk and Erik Gustafsson have been sent to the Adirondack Phantoms. Apparently the Flyers are not carrying a seventh defenseman. Maybe Read can play that position too.]

There has been no news yet regarding Brayden Schenn, Sean Couturier, Harry Zolniercyzk or Zac Rinaldo.

I can’t fathom the rationale behind waiving Betts, who is very likely to be picked up off of waivers. He is one of the best fourth liners in the NHL with special teams skills. His whopping $700K salary will now come off the books.

On defense, Walker’s demotion is no surprise due to his cap hit, but it is interesting that Erik Gustafsson has beaten out Bartulis for the 7th defenseman position.

Gus carries an additional $300K salary cap hit compared to Bartulis, but has a better shot of being a future 4th/5th defenseman than Bartulis at this point. Carrying Gus now allows him to become more acclimated to the NHL in a year when the Flyers must decide if they can keep one of (if not both or neither) Braydon Coburn and Matt Carle.