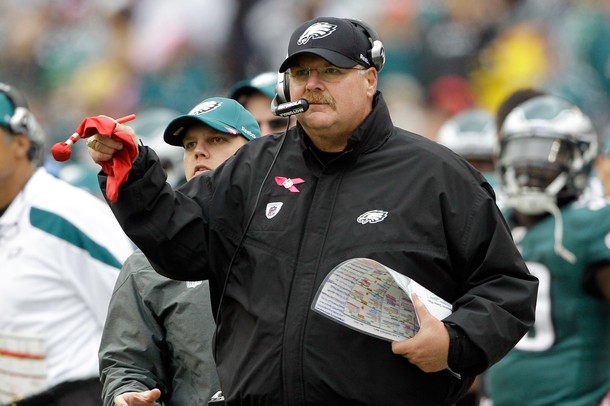 Andy Reid must be kicking himself for making the decision to move his offensive line coach, Juan Castillo from his long-held position to defensive coordinator. The problem with the defense and this football team isn’t just Castillo but he’s at the heart of it.

There seems to be mistakes and miscommunications going on at the end of each game on the defensive side of the ball. One of the alarming facets of the three game losing streak is way opposing offensive coordinators seem solve the Eagles defense at the end of games. They make adjustments but Castillo and his defense are unable to match them.

I can understand why Castillo has emphasized fundamentals because the team’s tackling has been atrocious. The missed tackles have turned into long plays which have destroyed the football team’s chances of winning.

I wouldn’t have advised the move that Reid made with Castillo but it would have been understandable to move him to linebacker coach for two or three years, then he could have been given the defensive coordinator’s position. The fact that the lockout prevented him and his players from getting valuable time together has helped to cripple the Eagles defense so far this season.

Reid and the Birds are in trouble. They are sporting a 1-3 record after losing the last three games, and they were leading all of these games when the fourth quarter started.

Right now the Birds have only two healthy defensive ends, Jason Babin and rookie Phillip Hunt. Cullen Jenkins will likely be asked to slide outside and give them some help.

Defensive tackle Antonio Dixon tore a tricep muscle on Sunday and will miss the rest of the season. He was placed on injured reserve and the team signed Derek Landri to replace him on the roster.

None of this is good news for a defense that is already struggling.

This is a difficult situation for Reid and his coaching staff. Everybody on the staff knows there’s something terribly wrong with the teams defense. They are close to Castillo, but he and the team’s defense would wind up keeping the defense out of the playoff and make the 2011 season a disaster.

Reid will need find a way to get Castillo some help without taking the job from him in the middle of the season. They need a veteran defensive mind or two added to the staff to help get this defense performing that way it’s capable of doing.

Imagine how last year’s defensive coordinator Sean McDermott feels. He’s in that position with the Carolina Panthers currently, and he didn’t have three Pro Bowl corners and a legitimate pass rush, but he was fired. Despite the fact that he had to battle and scrape with what he had to help the Birds get to the playoffs. McDermott had sat under the guidance of Jim Johnson for more than a decade.

Castillo has never coached on the defensive side of the ball during his entire time as an Eagles coach, yet he was given the defensive coordinator’s position. If McDermott needed preparation, yet still struggled, how could Castillo be expected to flourish with no experience at all.

The ball is in Reid’s hands now and he’s got to find a way to solve the defensive problems while at the same time figuring out how the Eagles offense can start getting into the end zone much more often.