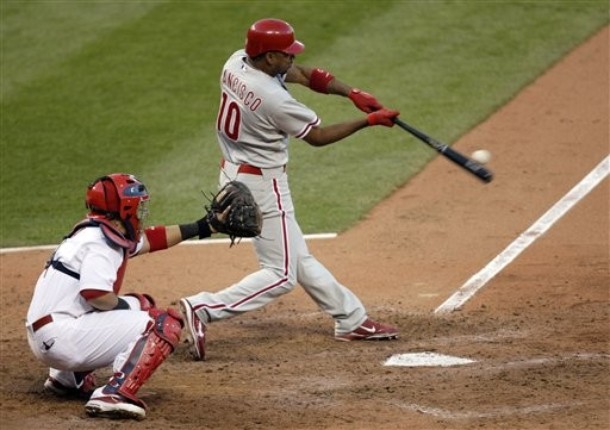 The Phillies fought a tough battle with the Cardinals on Tuesday night, but escaped with a critical 3-2 victory, and a 2-1 series lead. The Phillies won this game thanks to a trio of heroes.

The first hero had become a popular whipping boy in Philadelphia after hitting .167 and playing his way out of the starting job in right field by the end of May, but Phillies outfielder Ben Francisco delivered a titanic three-run homerun that may have shifted the momentum in the NLDS to the Phillies favor. He was 1-18 lifetime in the postseason, and had not homered in 109 at-bats before tonight.

The majestic shot by Francisco was reminiscent of the moonshot hit by Matt Stairs in the 2008 NLCS against the Dodgers, a play that turned the tide of that series.

Before the homerun, the Phillies looked to another hero from this game, starter Cole Hamels to deliver a dominating performance that they couldn’t get in Game 1 or 2. The Phillies knew that it would be hard to get runs off of Jaime Garcia, and they couldn’t afford to be in an instant 3-0 hole like they were in Game 1, and they couldn’t afford a 12-hit five run performance like they got from Cliff Lee in Game 2. Hamels responded with six shutout innings. The Cardinals made things tough on him, putting him through long at-bats, fouling off pitch after pitch, and driving his pitch count up to 117 after six innings. Though he couldn’t quite go as deep as the Phillies would have liked, he still delivered the excellent performance that Phillies needed against the tough lefthander Garcia.

Through six innings, Cardinals lefthander Jaime Garcia was in complete control of the Phillies. He allowed just three hits through his first six innings, had four 1-2-3 innings, and had not even thrown 90 pitches until the seventh inning. Shane Victorino led off the inning with a single, and advanced to second base on a passed ball. After recording the next two outs, Garcia opted to intentionally walk Carlos Ruiz to force Charlie Manuel to remove Cole Hamels from the game. However, by this time he’d lost a little of his excellent command, and hung a pitch for Francisco to crush.

The problem after the Francisco homerun was that the Phillies were forced to turn to their bullpen to get the final nine outs. Rookie Vance Worley was the first to get the call in the and a walk, but was able to finish the inning with no further damage.

Worley also began the eighth inning to face the righthander Ryan Theriot, but he gave up a single to start the inning. Manuel then turned things over to lefthander Antonio Bastardo, who got Nick Punto to pop up to centerfield. Brad Lidge was up next, and surrendered back-to-back hits to Matt Holliday and Rafael Furcal.

This prompted Manuel to turn to the third hero of the game, closer Ryan Madson to come into an extremely difficult situation, and attempt a five-out save. The closer came up by getting the first-batter he faced, Allen Craig, to groundout into a double play. It was also a strong defensive play by Chase Utley, who had to work quickly in order to get two outs. In the ninth inning, Madson gave up a run on two hits, but was able to hang on and record the final three outs to give the Phillies the all important 2-1 series lead.

Player Of The Game: Ryan Madson

As critical as Ben Francisco’s pinch-hit three-run homerun was, the performance of Cole Hamels was even more crucial to the Game 3 victory. But what was even more important than both of those efforts was that of closer Ryan Madson. The righthander was tasked with a huge mountain to climb in the eighth inning. With the bases loaded and only one out, facing the heart of the St. Louis order, the anchor of the Phillies bullpen stood tall, forcing a huge double play (killing the Cardinals best chance to rally), and recording the final three outs in the ninth inning.

Its a good thing they pulled it off. I don’t think my heart could have taken another heartbreak just days from two crushing losses.

You took our money, but the Phils stole our hearts!

This bodes well for his confidence. Ben will be needed further down the line.

This game gave me acid indigestion!!! Great win!!! Ben “Carlton” Franstinko, finally did something. WooHoo!!! First HR since May!!?? WOW, he sucks!!! Manuel looked like a genius tonight! See Reid, that’s what good in game adjustments look like, when your team is struggling, you bozo!! Take a look, & learn!! That’s why the Phils won a World Series, & are in serious contention every year, because they have a real front office, Manager & coaching staff, not the Keystone cops & circus @$$clowns, like across the street at the Nova Care complex!!!