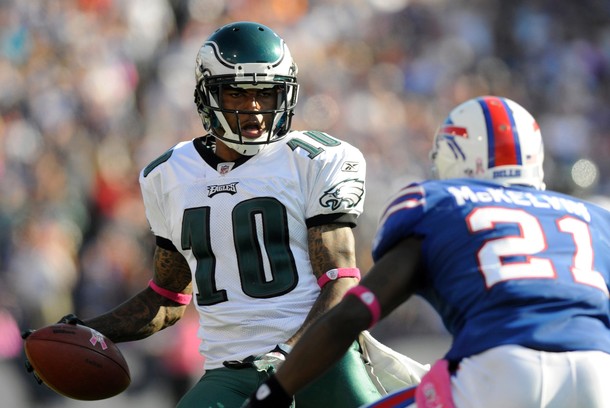 We saw on Sunday in the second half, how quickly the explosive Eagles offense can score. At the drop of hat, this Birds team can take a short pass and wind up in the end zone. They’ve been averaging more than 400 yards per game in offense, yet the team is only 1-4. Turnovers, ineffectiveness in the Red Zone and poor defensive play has wiped out the yardage advantage that they’ve had in their games.

For a split second, the Buffalo Bills took their eyes Michael Vick and when they looked up he had put the Eagles in position to score. On the next play, LeSean McCoy put the Eagles into the end zone.

The next time the Eagles got the ball, Vick connected with DeSean Jackson on a wide receiver screen and like a blur, Jackson took the ball into the end zone. He was dancing in the corner of the end zone while the Bills defense was trying to find out where he went.

They’re talented and they know it. They’ve got the fastest quarterback and wide receiver in the league, but they’re 1-4. The fact that they know their ability and potential to score at will has created a mindset that’s not a good one. You can see it in the cavalier manner in which they carry the football.

You may have noticed a number of Eagles players saying that the best team didn’t win after their losses. That demonstrates a mindset to me. They believe they’re better than everybody whether they beat them or not. I’ve always thought that the better team on the day of a game is the team that has the most points on the board when the clock read 00:00.

These players know they’re more talented than the teams which they have been playing, but talent alone doesn’t make them a better football team. Not making mistakes and staying away from turnovers is a talent which they haven’t demonstrated. They’ve got to be more disciplined and do a better job of eliminating turnovers, which means doing a better job of protecting the football.

When I look at the way Michael Vick, LeSean McCoy, DeSean Jackson and Jeremy Maclin carry the football, I know teams are going to be trying to pull the ball out of their hands on tackles. That’s what happened to Jason Avant even though he has always done a pretty good job of protecting the football.

Maclin ended the Eagles chances to win the 49ers game by coughing the ball up on a fumble.

If I were the defensive coordinator getting ready to play the Eagles, I would be stressing the idea of pulling the ball out and forcing them to turn the ball over. Vick, Maclin and Avant have cost this team games by fumbling, but notice that Jackson and McCoy haven’t changed the way they’re carrying the ball at all.

This means Reid’s message of cutting out the turnovers hasn’t really reached its target. He should threaten to put guys on the bench if they don’t start doing a better job of carrying the football securely. I think McCoy and Jackson have been fortunate that they haven’t coughed up the football yet. I think those fumbles could be coming up if they don’t start putting the ball away and carrying it more securely.

hands. Andy Reid hasn’t been able to get this offense to take the turnover issue serious enough. They continue to carry the ball like a loaf of bread.

Washington has a better defense than the Bills, but I expect them to be thinking turnovers when the play the Eagles this Sunday.