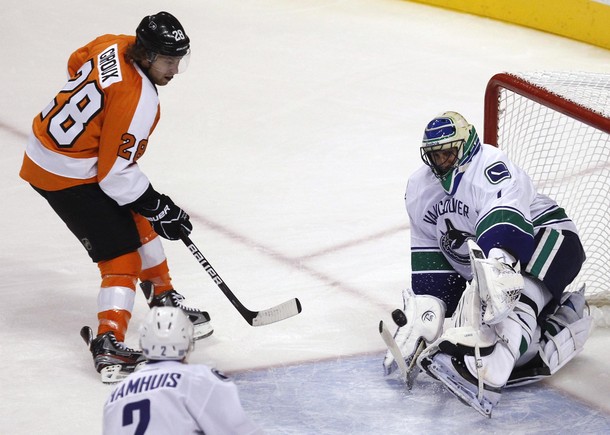 Even the most casual of hockey fans knew that Wednesday night was going to be a wild ride. The Philadelphia Flyers couldn’t have asked for a better opponent to open up against at home than the defending Western

Conference Champs, the Vancouver Canucks. The new-look Flyers had their second test in their third game of the season, and squeezed out a 5-4 victory.

Although the Flyers have pulled out two impressive victories over both Stanley Cup finalists, this game had more mixed feelings than the games against Boston and New Jersey. While the Flyers are showing they are tougher up front, they are still taking undisciplined penalties that almost cost them this game.

It wasn’t surprising that the Flyers would come out in high emotion in front of their home fans, but what was surprising of how much they completely overwhelmed the Canucks in the first half of the opening period. Claude Giroux and Chris Pronger each tallied on the power play as the Flyers were severely pressing the Canucks in their own zone. Mikael Samuelsson would get Vancouver’s first goal on the power play, but James Van Riemsdyk answered just over a minute later as the Flyers took a 3-1 lead into the intermission.

Give Peter Laviolette credit for preparing his team for this game. Subtle changes in their fore check really gave

Vancouver trouble early on. The Flyers usually employ 2 fore checkers down low behind the net to force turnovers, but he changed the strategy against the skilled blue-line of the Canucks. By sending one fore checker down low, crashing the net, and cycling the play along the boards, the Flyers were able to keep the Canucks pinned in their own end. The strategy kept them on their heels and unable to get out of their own zone.

Good strategy, high pressure, three goals. Game over, right? Not exactly. Vancouver showed why they came within one game of the Stanley Cup last spring.

Henrik Sedin cashed in off an Ilya Brygalov rebound, and although Jakub Voracek responded 90 seconds later to give the Flyers a 4-2 lead, Chris Higgins pulled the Canucks within one again as he slipped behind Kimmo Timonen to put one past Bryzgalov to pull Vancouver within one going into the third.

Vancouver would nab their second power-play goal from Daniel Sedin early in the third to tie the game, but Andrej Mezaros scored the game-winner a minute later to cap the scoring.

What’s most impressive, the Flyers answered 3 of Vancouver’s goals within 90 seconds of each other. Ilya Bryzgalov shut down the potent Vancouver offense by making 36 saves on the night, his heaviest workload in a Flyer uniform, as the Flyers committed 5 penalties in the 3rd period alone.

While it was an exciting game, the Flyers showed they are still rough around the edges. Vancouver started to expose the Flyers defense in the 2nd period. All of Vancouver’s goals came off back door plays. Not one goal was scored where a Flyer defenseman was in position. It’s playing with fire when facing a team that plays a very fluid east-west system and have the Sedin twins. However, you can’t say the defense played poorly. The Flyers penalty-kill nullified 5-of-7 Vancouver power plays, and gave Ilya Bryzgalov plenty of support up front.

The most concerning thing about the Flyers right now is that they are still taking undisciplined penalties. While some of the five penalties called in the third were questionable, the Flyers almost gave the game away. They spent practically the whole 3rd period in the penalty box, and if it were not for outstanding goaltending by Bryzgalov, the Flyers would have likely lost this game.

Nonetheless, you can’t complain about a win, especially after beating both Boston and Vancouver within a week. This team showed tonight that they will be a gritty team that will refuse to quit.

On Friday, I will have a report on how the Flyers stack up against the competition in the conference, and what it will take for them to succeed this season.